(Hooray for) Hollywood, Arguably The Most Shallow & Celebrity Focused Stretch Of Land On Planet Earth

On my first trip to Los Angeles back in 2003 I made an effort to do LA: I did the Movie Star Houses Tour of Bel Air & Beverly Hills; I hung out with the beautiful rollerblading bodies on Venice Beach; I spent a day standing in queues for rides at Universal Studios; I went star gazing on Sunset Strip & Hollywood Boulevard; I visited Pacific Park on Santa Monica Pier; & I drove, as you do, in an open-top down Rodeo Drive. I ticked a lot of boxes. But even so, that trip to LA turned out to be one of the least favourite stops on my 2002-2003 round the world trip. I found it – LA – way too big (because it is), impersonal (it’s that too), superficial & lacking character (yep, both). It was all sunglasses, botox & fake tan, just as I expected it to be.

On this visit to the LA metropolitan area – which with its several districts houses some 17 million people making it the second-most populous in the US – I was sure to be selective. I based myself in the Hollywood (

) district of the city, & I was happy to do so without a to-do list. I still got up to stuff, which in Hollywood invariably revolves around TV & the movies, & I now know that being selective in gargantuan LA makes for a much more enjoyable visit.

Horray For Hollywood
Hollywood, the place where movies are made – or to be accurate, were made – is the district of Los Angeles long associated with the American film industry. It’s arguably the most shallow and celebrity focused stretch of land on planet earth. It was founded as an independent city in 1903 and voted to merge with the City of Los Angeles in 1910. That same year also saw the birth of the Southern California motion picture industry when D. W. Griffith relocated his Biograph Company, sparking a westward migration of East Coast filmmakers. As movies exploded in popularity in the 1910s and ’20s, the name Hollywood became synonymous with ‘the Industry’. But in the decades following World War II, Hollywood’s glitz and glamour began to fade as most of the leading film studios moved to other places, mostly to Burbank – today only one major film studio, Paramount, is still based in Hollywood proper. The decline continued right into the 1980s, by which time Hollywood was considered one of the worst neighbourhoods in Los Angeles. A much-needed 1990s makeover saw the beginning of community redevelopment efforts and while its bests days are well & truly behind it, today Hollywood is once again one of the city’s most vibrant areas & still an important player in the entertainment industry with its myriad production and broadcast facilities. 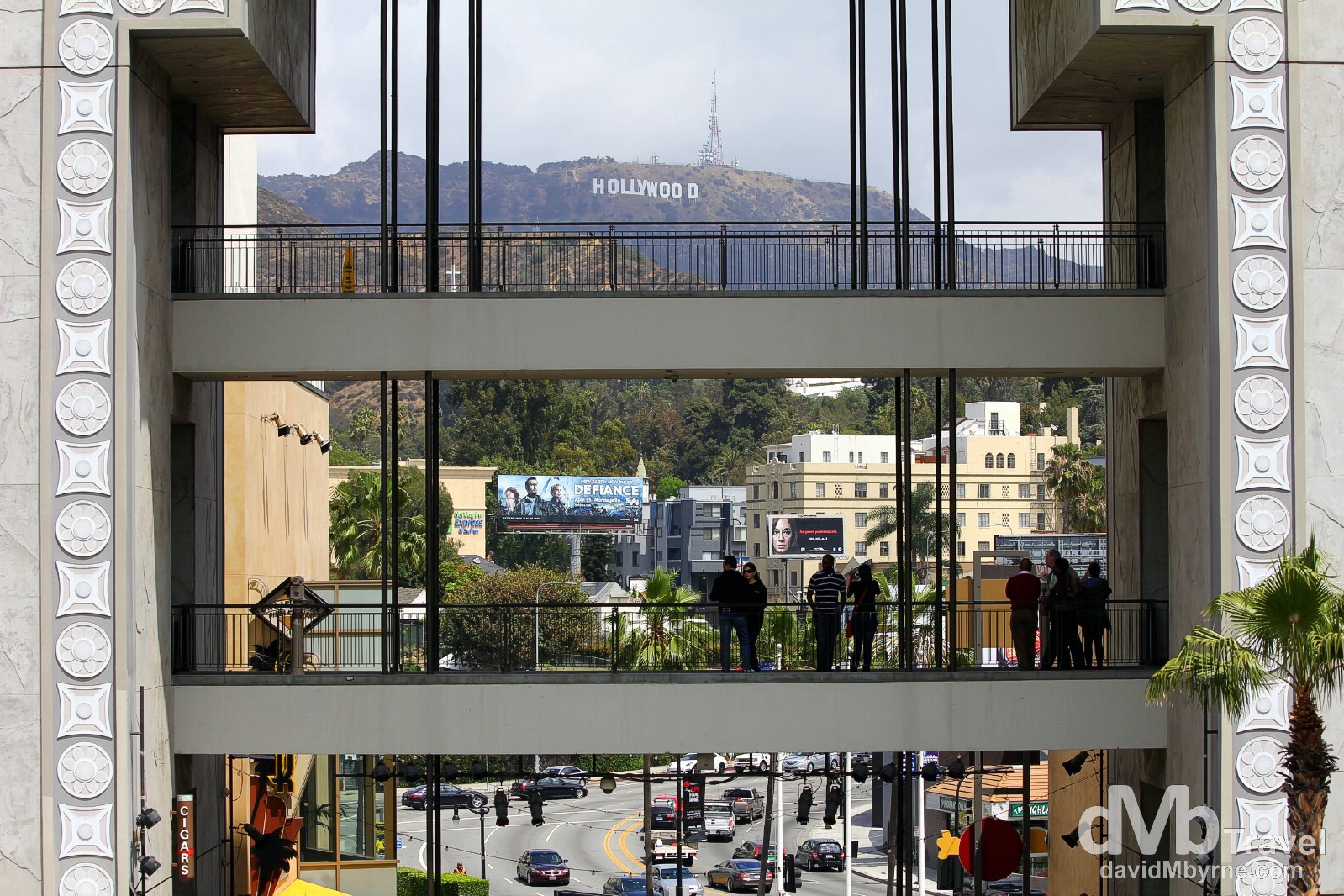 The iconic Hollywood sign as viewed from the Hollywood & Highland Center on Hollywood Boulevard, Hollywood, Los Angeles, California, USA. April 15, 2013 || First erected in 1923 as an advertisement for a local real estate development, when it spelled out the letters ‘Hollywoodland’ (it lost the last four letters in 1949), today the 10 metre/45-foot-tall letters of the Hollywood sign are the definitive symbol of LA & an American cultural icon. You can of course, and I did, hike as close to the sign as you are allowed without getting arrested (virtually guaranteed if you stray where you shouldn’t) by making your way up into the residential slopes of Mount Lee in Griffith Park overlooking Hollywood. But if your time & energy is limited then the best albeit distant views of Hollywood’s most recognisable landmark from downtown Hollywood are from right here, the walkways at the Hollywood & Highland Center, a vast shopping mall & entertainment complex on Hollywood Boulevard. Home to the Dolby Theatre, the location for the annual Academy Awards ceremony, a.k.a. The Oscars, it was built as part of the aforementioned 1990s Hollywood revival.

For this visit to Hollywood I based myself just off Hollywood Boulevard, downtown Hollywood’s main drag, a stretch that immortalises the glamour & exclusivity of celebrity, fame & stardom via uber-tacky shops & circus-like attractions. I spent quite a bit of time over quite a few days searching out stars on Hollywood Boulevard’s Walk of Fame (doing so is strangely addictive), probably Hollywood’s most popular tourist attraction. 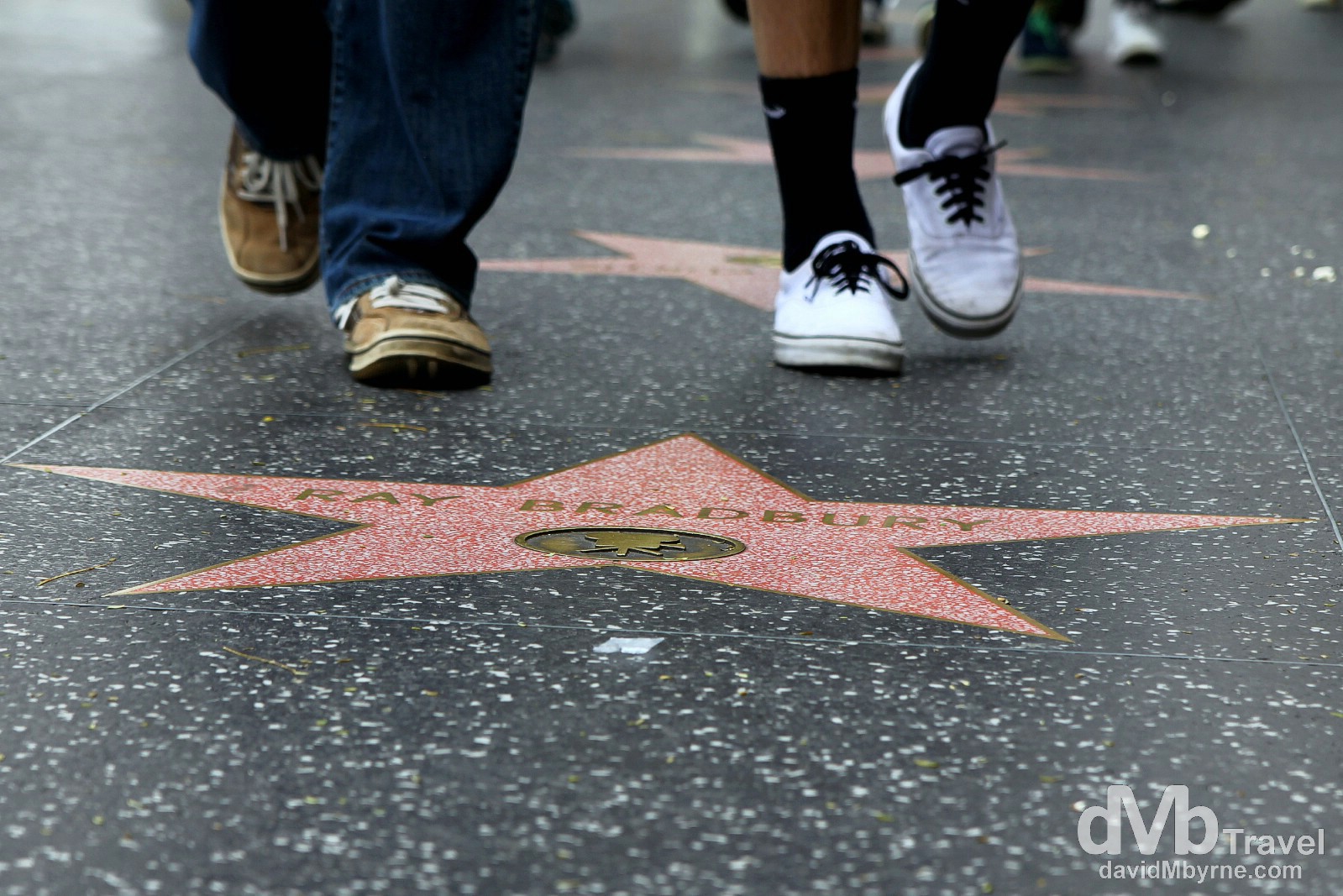 The Walk of Fame on Hollywood Boulevard, Los Angeles, California, USA. April 4, 2013 || Hollywood’s Walk of Fame, found along Hollywood Boulevard and also Vine Street in downtown Hollywood, consists of more than 2,500 five-pointed terrazzo and brass stars embedded in the sidewalk. The stars commemorate famous personalities associated with one of four branches of the entertainment industry – movie, radio, theatre, and TV – the majority of whom have paid a hefty fee to be immortalised in this way; $30,000 is the current figure to allow millions of tourists a year walk all over you. 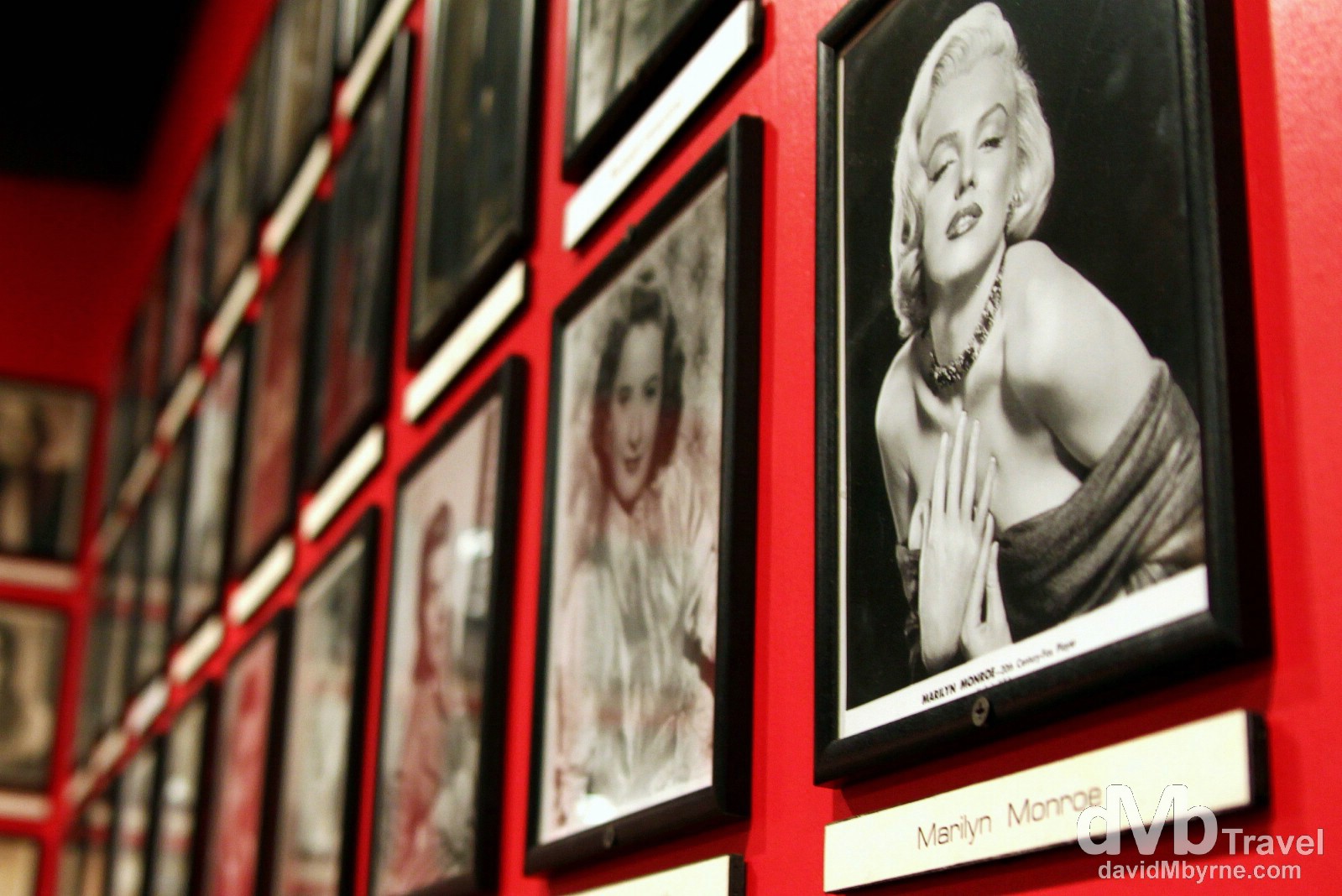 Portraits of movie stars in the Hollywood Museum off Hollywood Boulevard, Los Angeles, California, USA. April 14, 2013 || The Hollywood Museum, the so-called official museum of Hollywood consists of four floors housing more than 10,000 authentic show biz treasures – costumes, props, actual famous movie sets, photographs, scripts, posters, vintage memorabilia etc. – making it the most extensive collection of Hollywood memorabilia in the world. The museum is housed in the historic Art Deco Max Factor Building at 1660 North Highland at Hollywood Boulevard, itself an attraction. The building was originally purchased by Max Factor, the legendary make-up artist to the stars, in 1928, but it was not until 1935 that it was finally opened to serve the likes of Betty Davis & Marilyn Monroe. 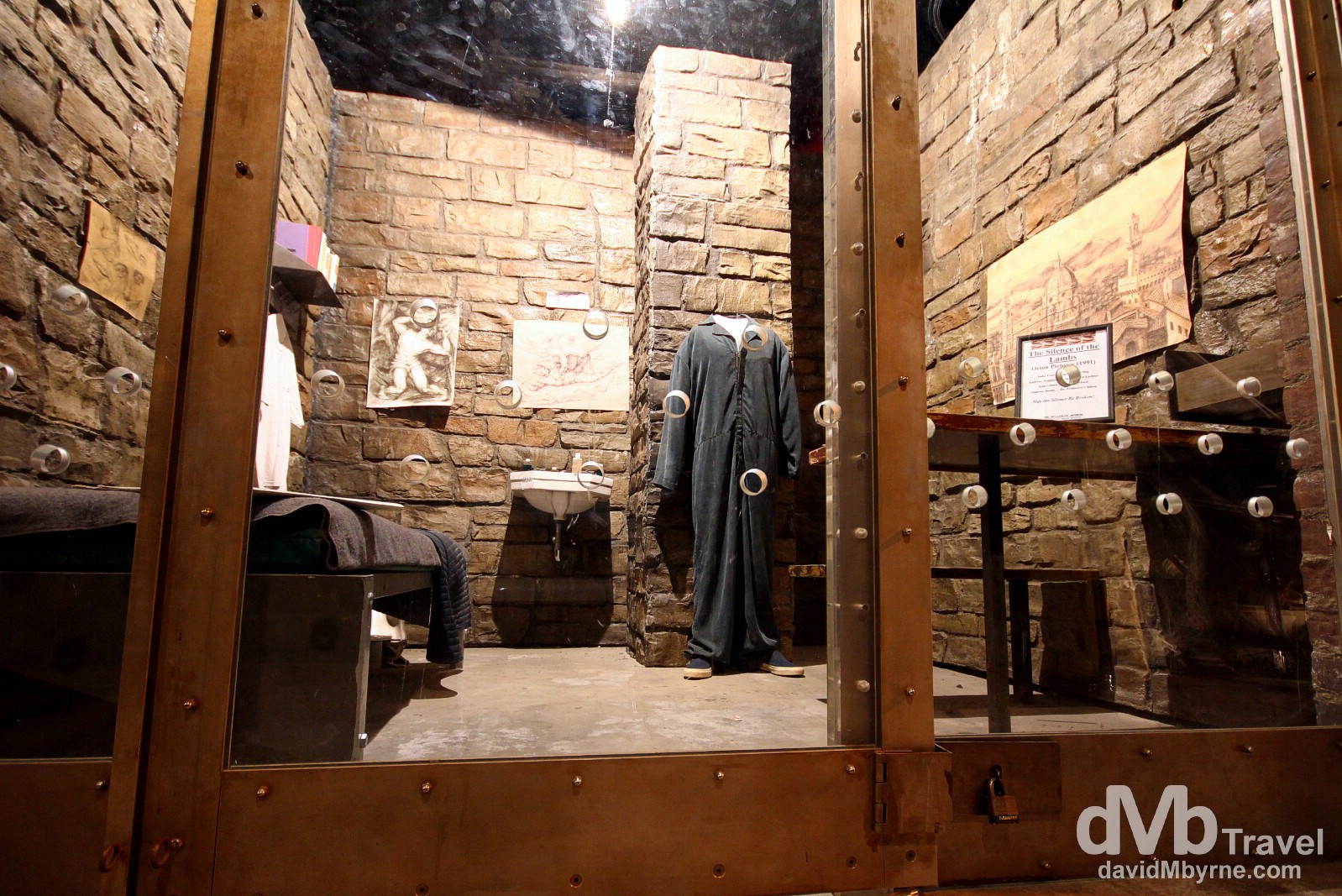 Hannibal Lecter’s cell from the 1991 Ocsar-winning movie Silence Of The Lambs in The Dungeon of Doom of the Hollywood Museum off Hollywood Boulevard, Los Angeles, California, USA. April 14th 2013.

OK, so I did venture out of Hollywood proper, although I didn’t go too far. Burbank is a small city located in the San Fernando Valley. It is known as the so-called Media Capital of the World & is considered the real Hollywood given the fact that it is home to studios like Disney, Warner Brothers, CBS and NBC Universal. 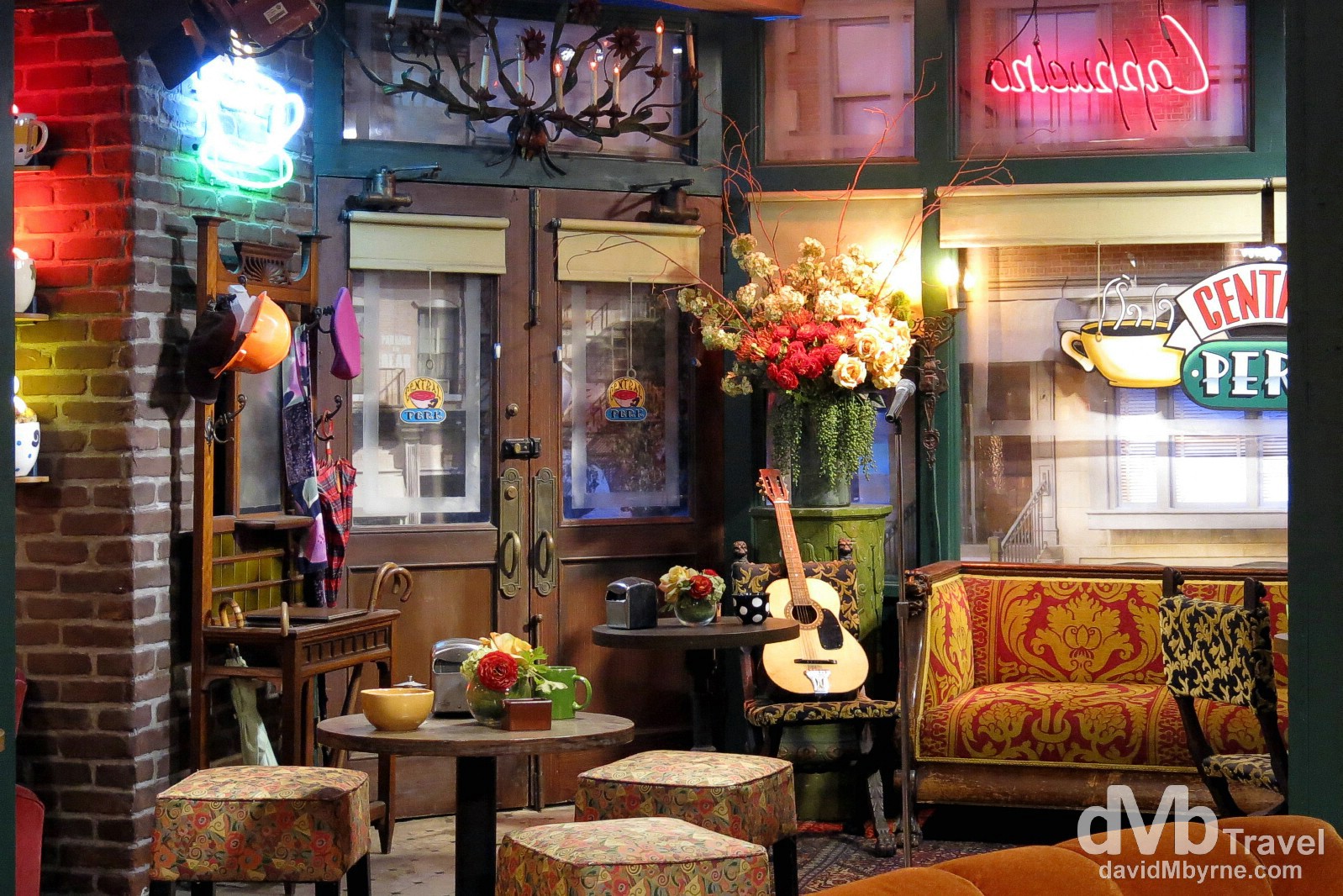 Central Perk, the fictional coffee shop/cafe from the hugely popular 1990s sitcom Friends in Warner Brothers Studios, Burbank, LA, California, USA. April 13, 2013 || The 3 hour guided tour of Warner Bros Studios was awesome and comes well recommended, the highlight of which for me was getting to see the actual set for the Central Perk coffee shop/cafe set used in the 1990s sitcom Friends. Of course it’s no longer used as a recording set but is preserved to appease the likes of me, & appease me it did – tour participants even get have their picture taken while sitting on the famous Central Perk sofa.