Ban Gioc, a.k.a. the Detian Falls, are a delightful set of cataracts straddling the Chinese/Vietnamese border. The falls, broader than their 30 metre height, are framed by fabulously shaped dark karst hills & paddy fields. Remote? Yes. Picturesque? You bet ya. 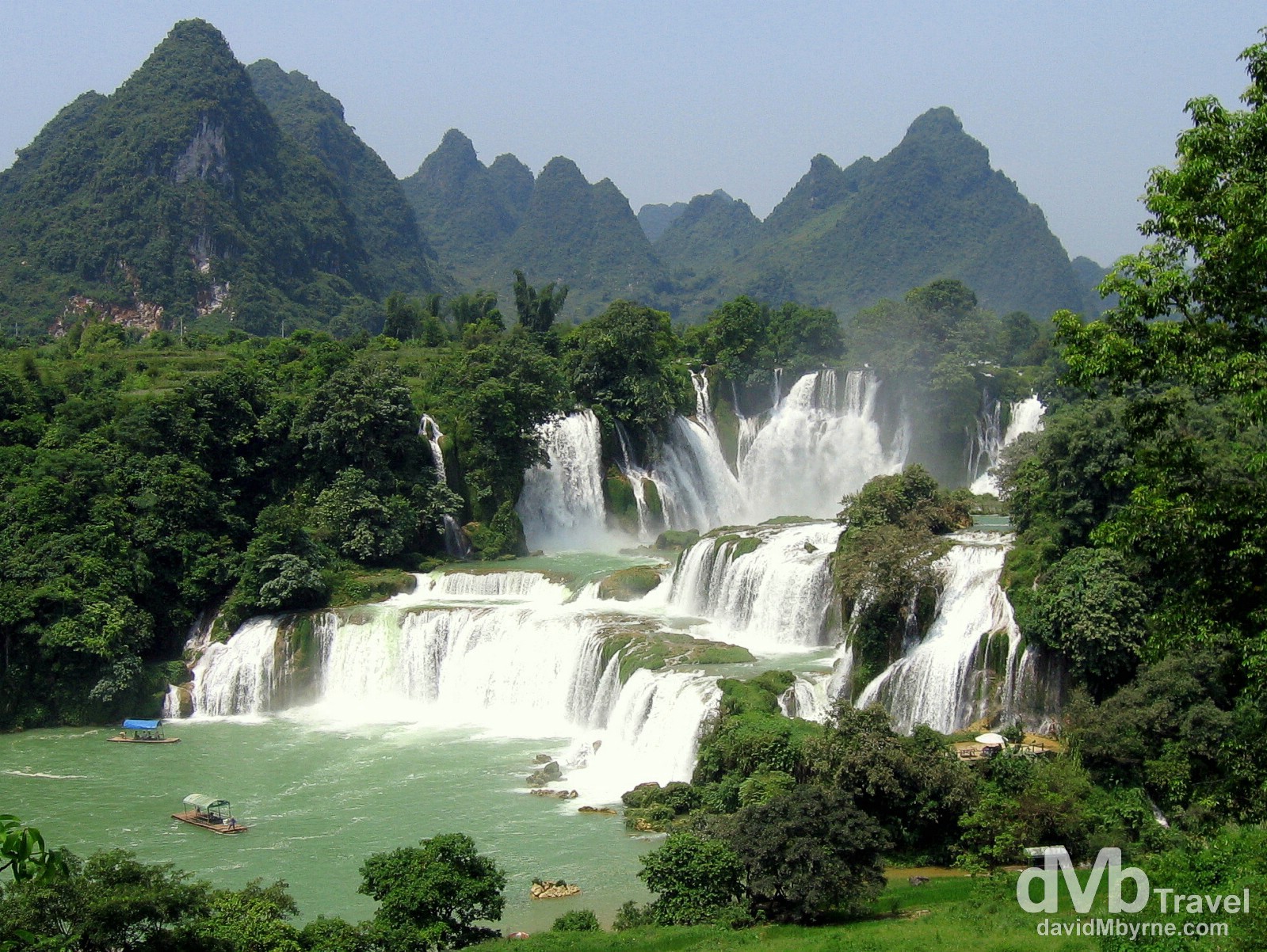 This picture was taken from the Chinese side of the falls looking across to the Vietnamese side. This is a rather remote corner of both countries and requires quite a bit of effort to get to (read about it below). However, there’s no gain without pain & with views like this were the reward enough for me for the effort required to get here. The Ban Gioc / Detian falls straddling the China-Vietnam border, near Shuolongzhen, southwest China. September 2, 2005.

Ban Gioc / Detian Falls || Getting There
I’m visited the falls from Nanning, an industrial city in southwest China & the nearest rail stop to the falls. I was in Nanning as I’m presently passing through the region en route from Hong Kong/Macau to the Chinese/Vietnamese border crossing, some 200 kilometres west of Nanning. Although the falls straddle the Chinese/Vietnamese border, there is no border crossing point at the falls themselves meaning for me visiting the falls is requiring a 360 kilometre, multi-day round-trip adventure (& what an adventure it has been so far) from Nanning via bus (Nanning to Daxin (

), 160 kilometres) & peticab, a motorbike with a hooded trailer (Daxin to Shuolongzhen (

), 20 kilometres) to the small settlement of restaurants & guesthouses at the falls. 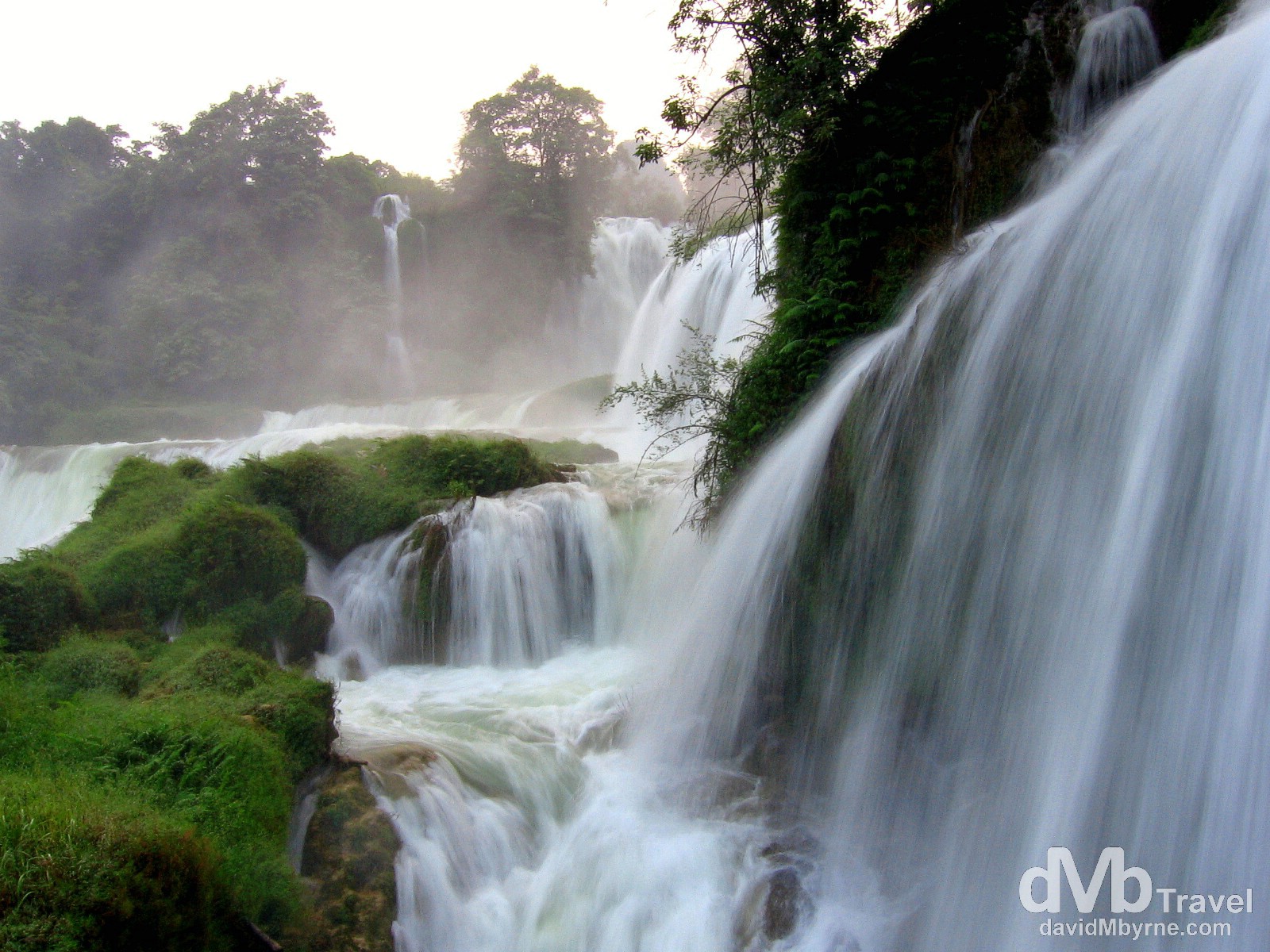 My travel partner, Cal, & I arrived at the falls yesterday evening having spent the whole afternoon getting here from Nanning. It was an overcast day and by the time we got our first view of the impressive, thunderous falls it was late in the afternoon and the light was fading fast. We spent some time down by the base of the falls trying not to fall in the water & take some pictures, both of which we succeeded at, and trying to keep dry, which we didn’t – the spray this close to the falls is intense (as is the noise). At the Ban Gioc / Detian Falls straddling the China-Vietnam border, near Shuolongzhen, southwest China. September 1, 2005.

Today was a much nicer day with clear blue skies. The falls looked even better than they did yesterday evening. 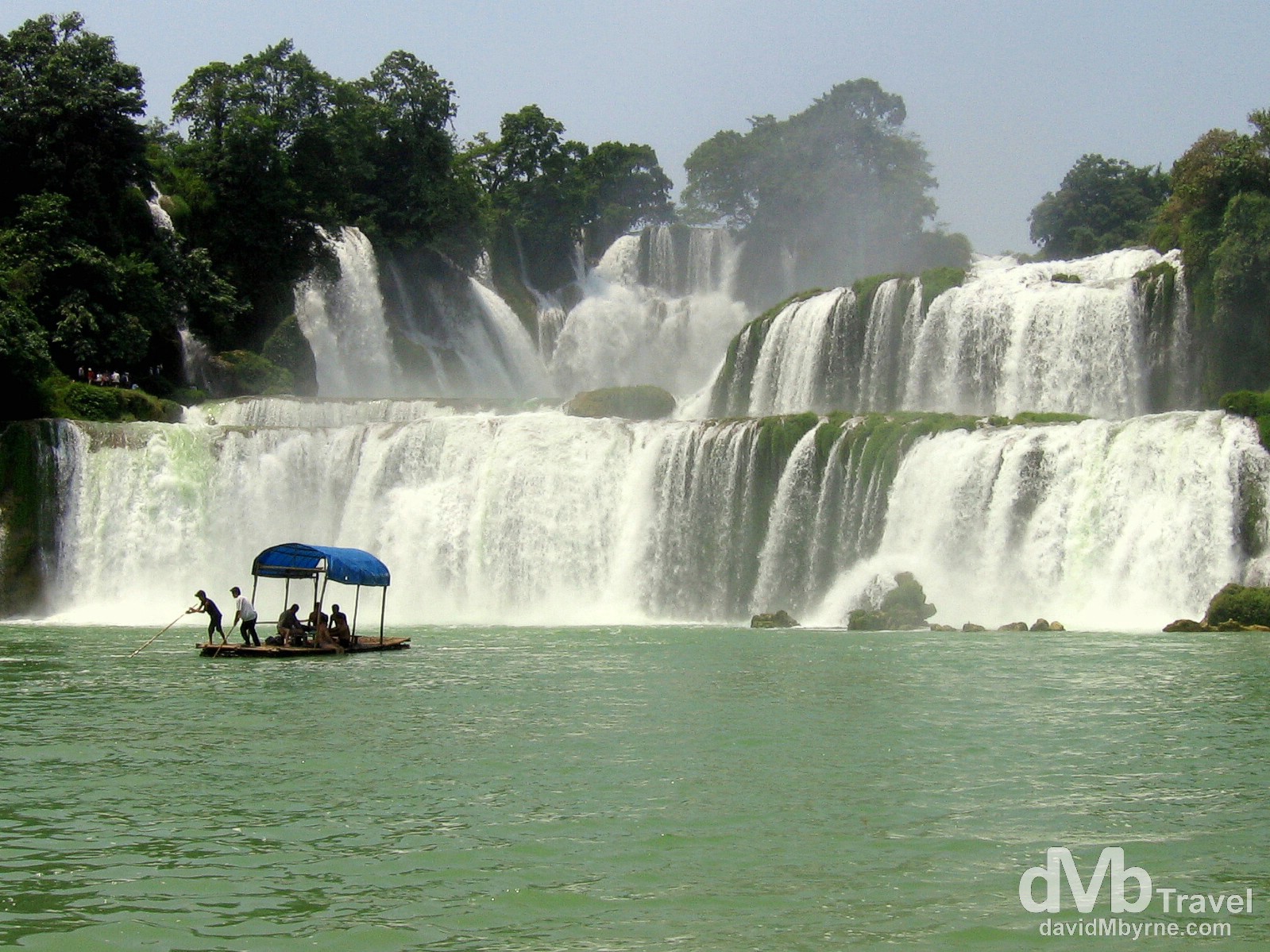 Boating at the base of the Ban Gioc / Detian Falls straddling the China-Vietnam border, near Shuolongzhen, southwest China. September 2, 2005. 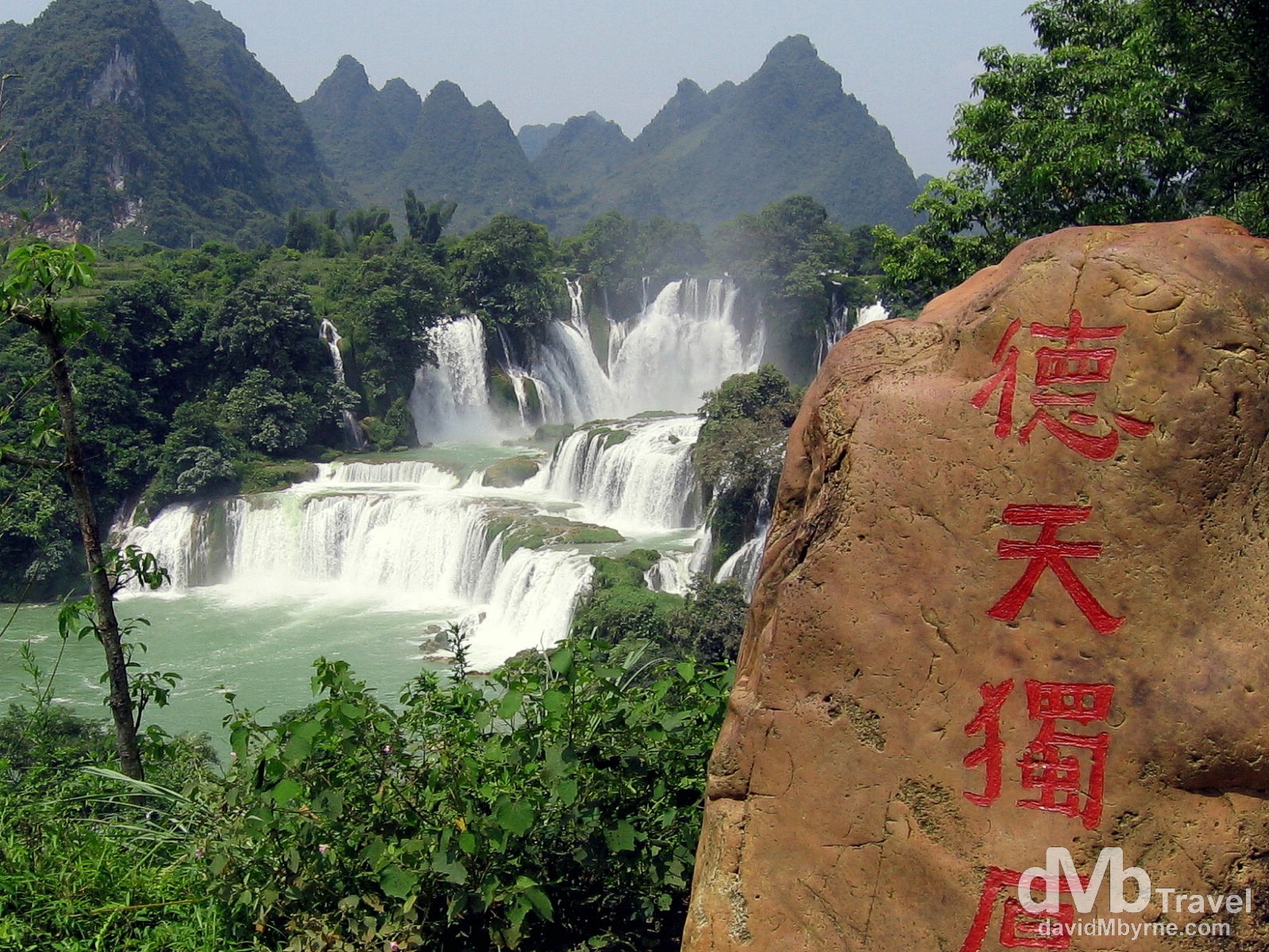 Cal & I were the only visitors to the falls for the few hours we hung around them today. Not surprising really given how remote this place is. Paths on our side of the falls, the Chinese side, provide clear views across the river into Vietnam and lead down to the base of the falls past a series of bamboo groves. Paths also lead up along the top of the falls into a field where there is a stone post proclaiming the Sino-Vietnamese frontier in both Chinese and French – one step back and you’re in China, one step forward and you’re in Vietnam (& we didn’t need our Vietnamese visas here). We also found a bizarre border market with Chinese and Vietnamese traders competing for custom within feet of each other – Chinese-manned stalls down one side, Vietnamese-manned stalls down the other. For some strange reason most stalls were selling Thai souvenirs and perfume. All this in a field in the middle of nowhere straddling the China-Vietnam border with not another tourist in sight. Again totally bizarre. The Ban Gioc / Detian Falls straddling the China-Vietnam border, near Shuolongzhen, southwest China. September 2, 2005. 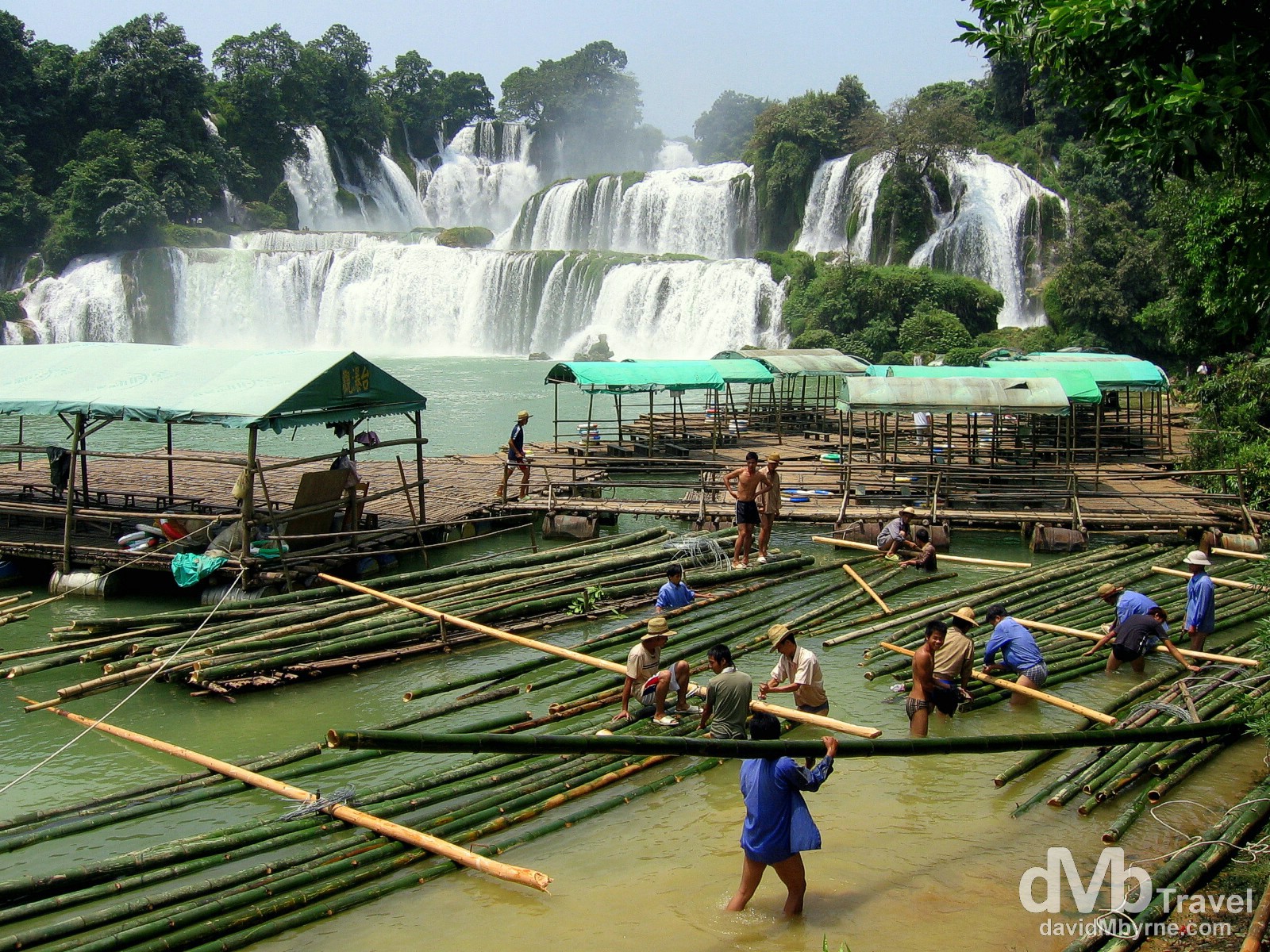 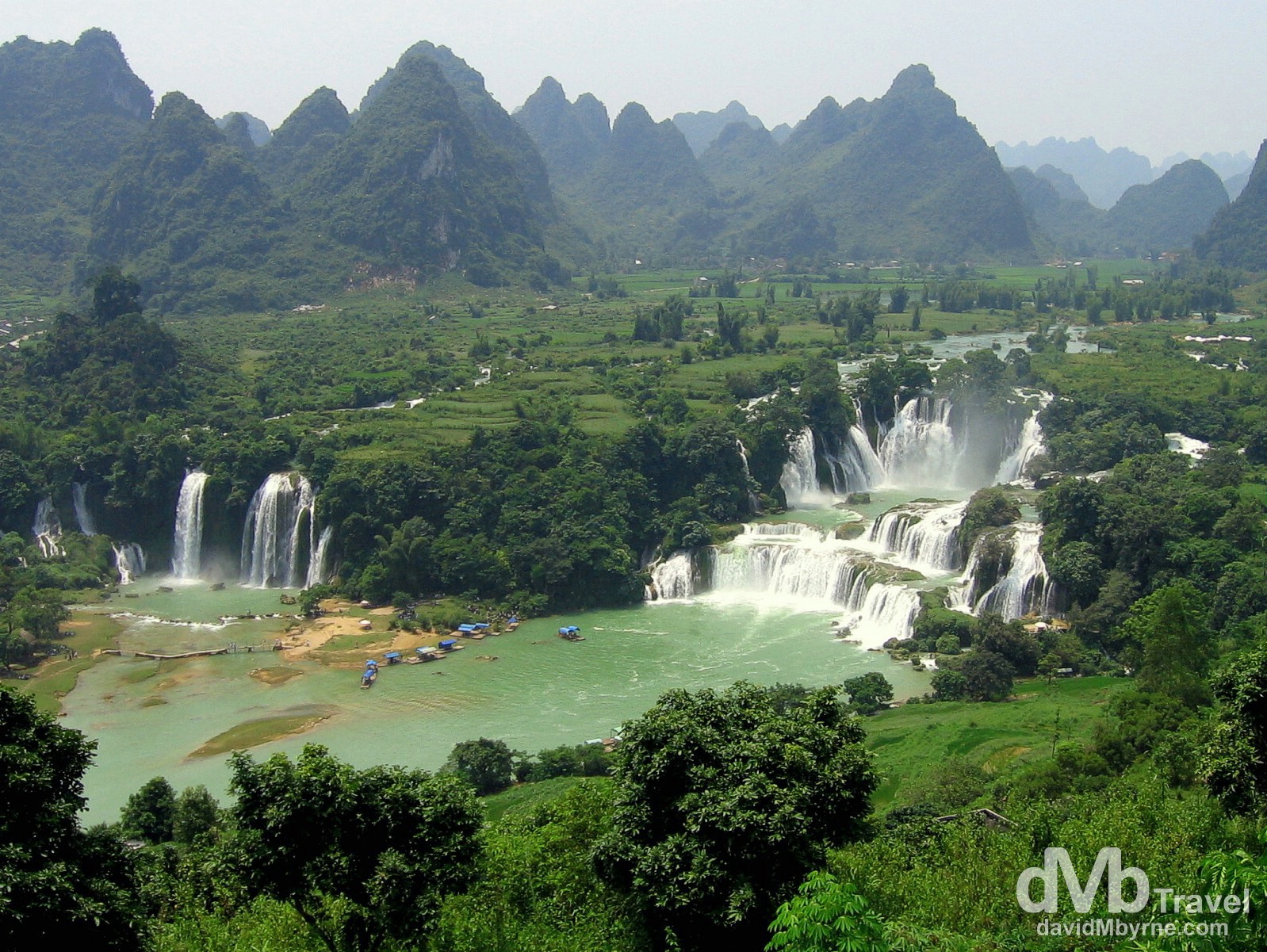