“The bridge, what’s left of it a well preserved and a popular tourist attraction, ends abruptly in a mass of twisted metal about half way across the river, an abundance of Chinese flags, piped revolutionary music and a huge screen looping Korea War footage there to accompany you as you peer the rest of the way into the curiosity that is North Korea, the world’s very last Stalinist dictatorship.”

Image || The Broken Bridge (& Sino-Korean Friendship Bridge) spanning the Yala River as seen from the Chinese side of the China/North Korea border in Dandong, Liaoning Province, China. August 13, 2017.

It was early. 07:30. I’d only been in Dandong a few minutes having just arrived off the overnight train from Beijing.

“Sinuiju” said the taxi driver pointing to his left, to the far, southern bank of the city’s Yalu River. I’d never heard the word before, but I understood its meaning – the city in North Korea that faces Dandong.

It was obvious. North Korea.

About a kilometre away. North Korea. 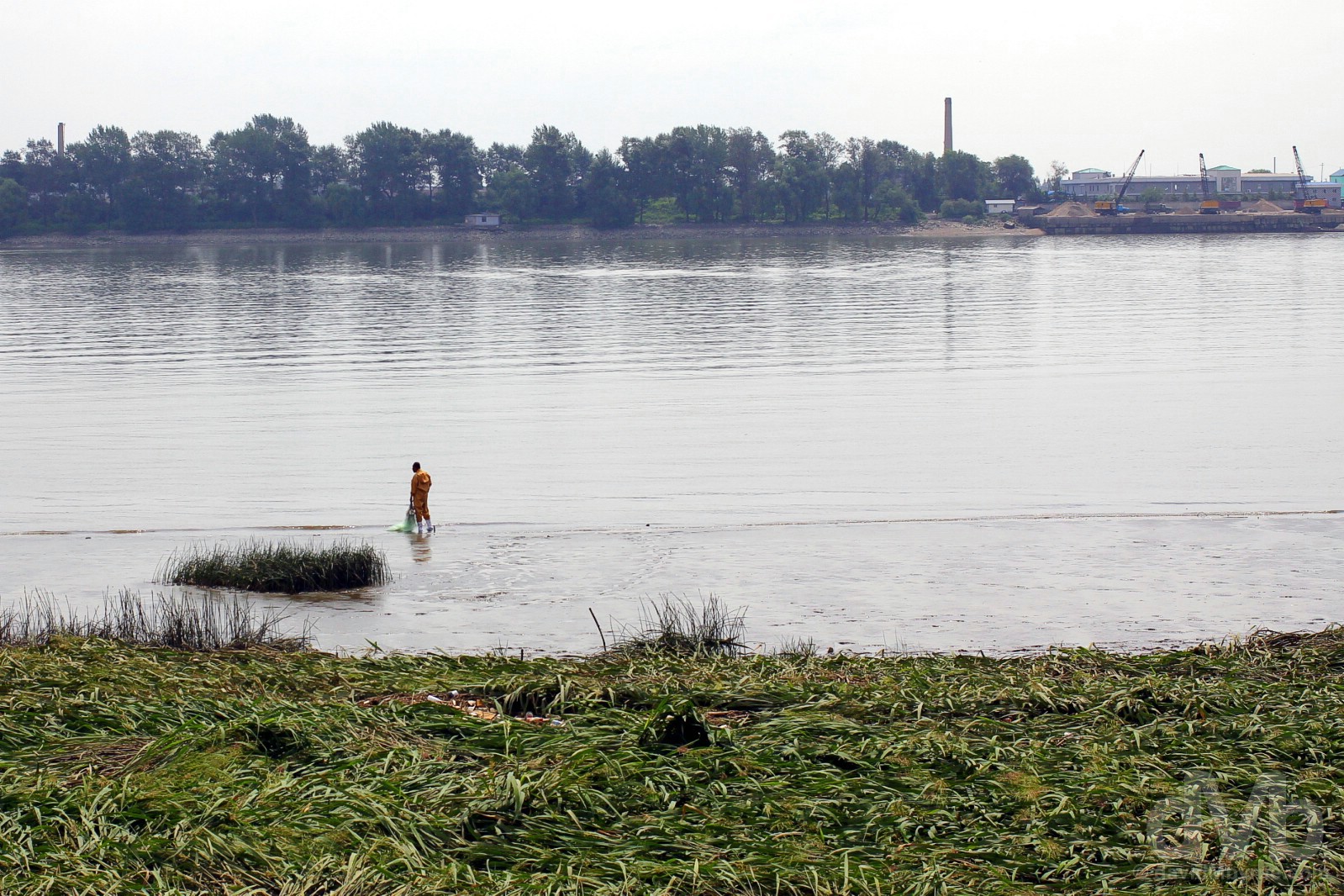 DANDONG || A portion of the North Korean town of Sinuiju as seen from the banks of the Yalu River in Dandong, Liaoning Province, China. August 13, 2017.

Dandong is the largest border town between North Korea and China, the latter the ostracised former’s only real ally. A somewhat obscure port tucked away in the corner of China’s Liaoning province at the confluence of the Yalu River and the Yellow Sea, Dandong’s proximity to North Korea means a substantial portion of the Hermit Kingdom’s international aid flows through the town (and like most border towns it seemingly has something of an illicit underbelly, not that I’d know anything about that). It’s busy. Of course it is – it may be less than a kilometre from North Korea but this is still China after all. I took this picture standing by the banks of the river a few yards from my Moon Island hotel and shortly after arriving in the city. Activity can be seen on the North Korean side, mainly the loading of minerals into rusting-looking boats, mineral exportation one of the few sources of revenue for North Korea (for now that is, pending tighter sanctions).

A few minutes later we passed a dozen or so girls in a procession. Nothing unusual about that except for the fact that the taxi driver felt the need to bring the grouping to my attention. I’d no idea what he was saying, but again I understood. Having read pre-arrival that Dandong is a popular place for North Korean hostesses working in Korean restaurants, another much needed source of revenue for their impoverished homeland, I deduced that they were North Koreans.

“Anyong haseyo” I said in reply to the taxi driver, ‘hello, how are you?’ in Korean.

Immediately he laughed an appreciative laugh, understanding I understood him by him understanding me. No more words were said until we arrived at my hotel. 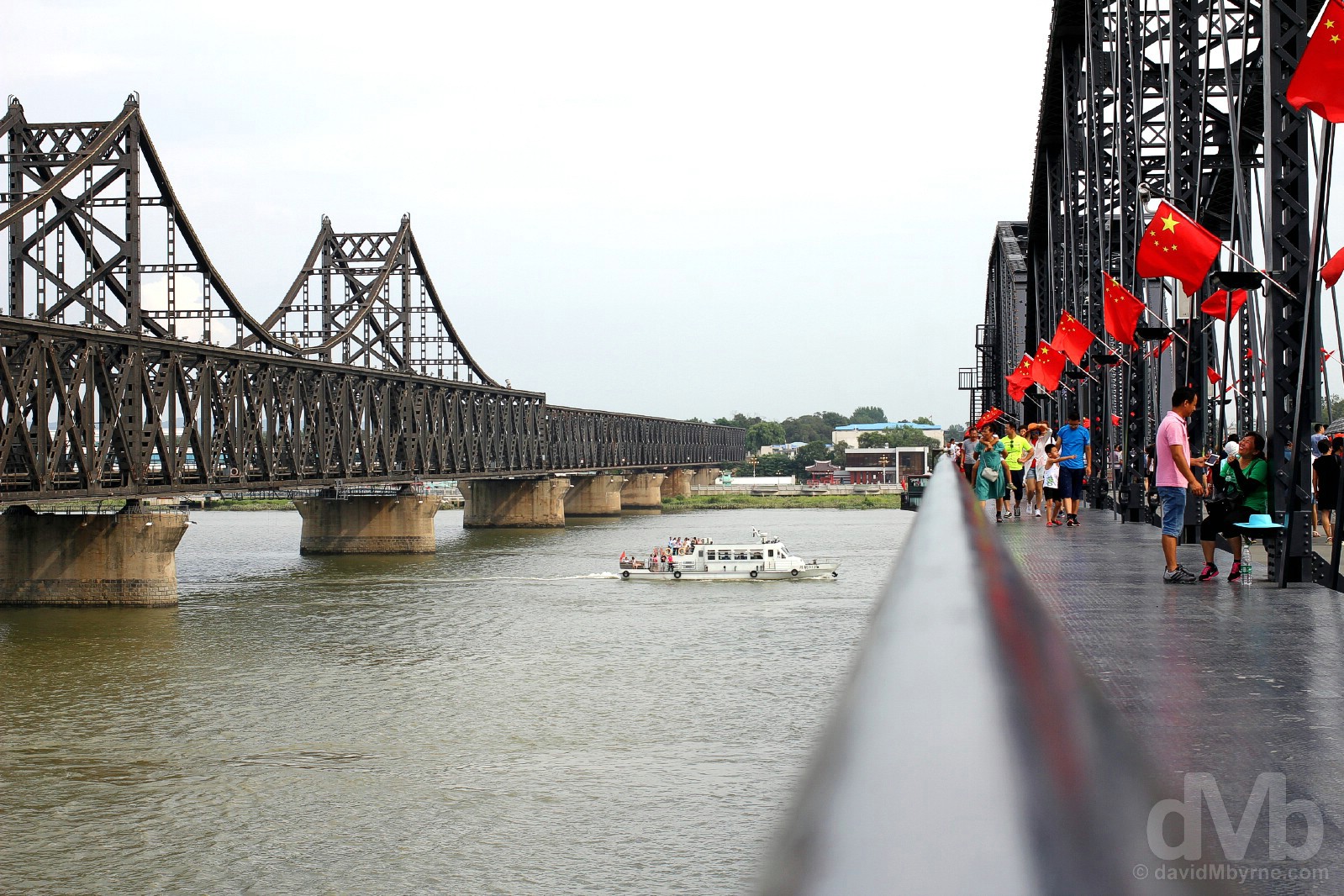 Korea In China
Belying its relative remoteness, Dandong is a popular place, especially with South Koreans – It’s about as close to their northern neighbour as they can get, even closer than a visit to the DMZ. Needless to say the Chinese flock here too, both to see their own border and to experience the uniqueness of the city – being here affords them the opportunity, while remaining in China, to immerse themselves in all things Korea while gawking across into the Hermit Kingdom, the latter of which they can do from either from the banks of the city’s Yalu River, from tourist boats that ply its waters, or from the end of the so-called Broken Bridge, the city’s definite symbol and by some way its biggest draw. 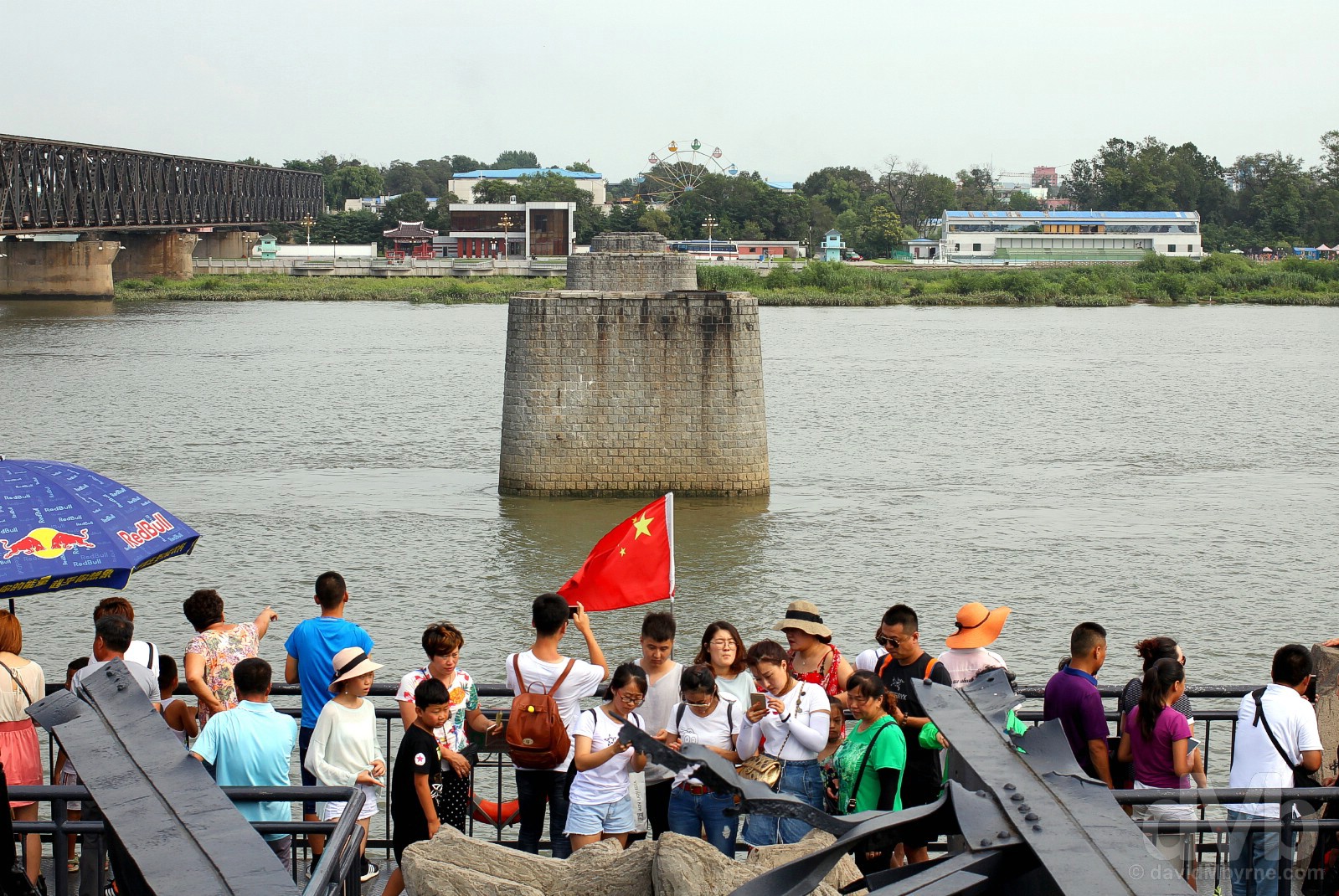 BROKEN BRIDGE/OLD YALU BRIDGE || At the end of the Broken Bridge of the Yalu River in Dandong, Liaoning Province, China. August 13, 2017.

Completed between 1909 and 1911, when Dandong was known as Andong, this was the first iron bridge to span the Yalu River. Measuring 944 metres long and 11 metres wide, only 4 of the bridge’s original 12 arches survived American bombing in 1950, an American response to China entering the Korean War. The bridge today, what’s left of it a well preserved and a popular tourist attraction, ends abruptly in a mass of twisted metal about half way across the river, an abundance of Chinese flags, thirty framed pictures of its original construction (by the Japanese, who held sway on the Korean Peninsula from 1910-1945), piped revolutionary music and a huge screen looping Korean War footage there to accompany you as you peer the rest of the way, with the aid of binoculars if necessary, into the curiosity that is North Korea, the world’s very last Stalinist dictatorship. 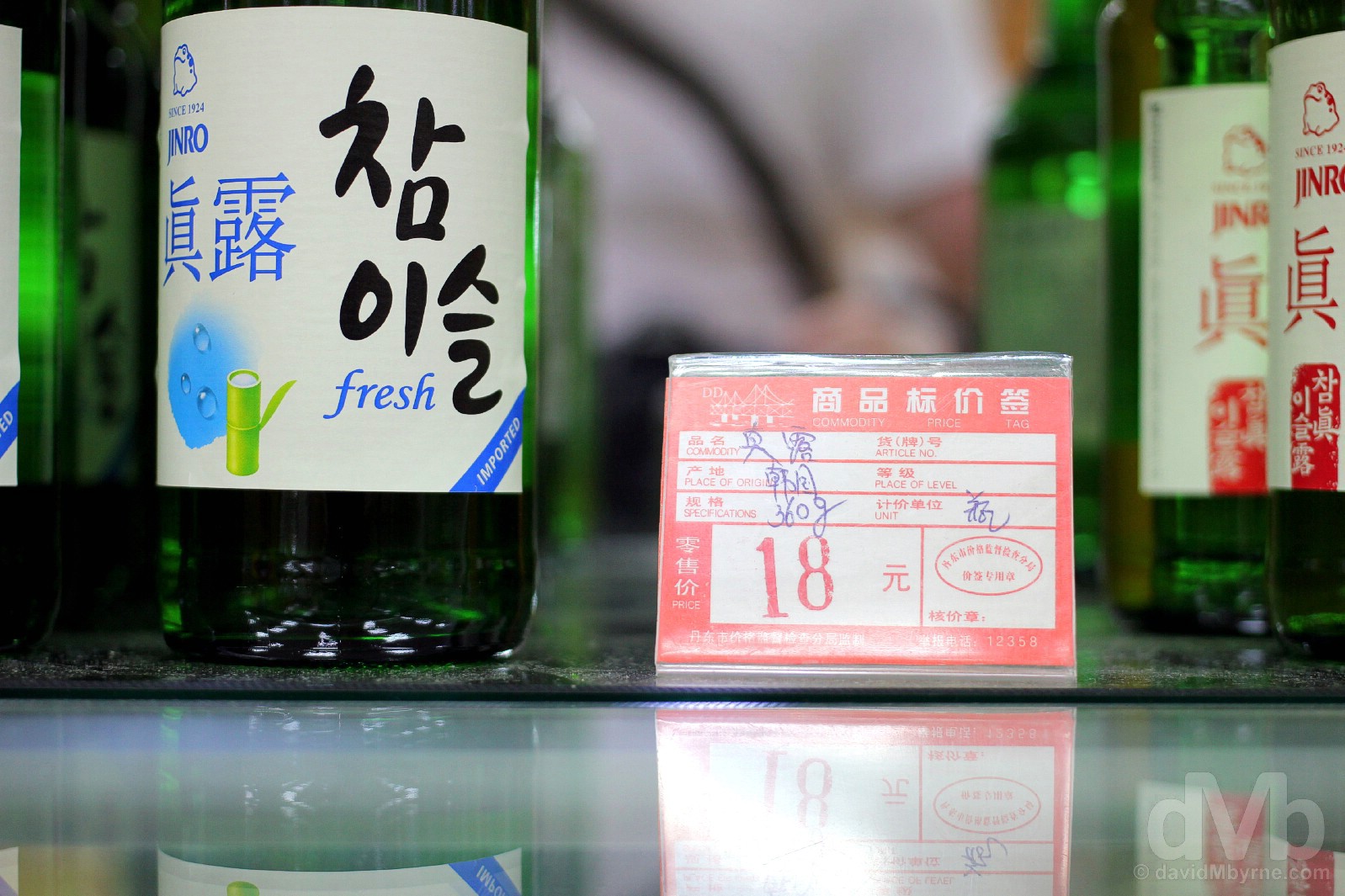 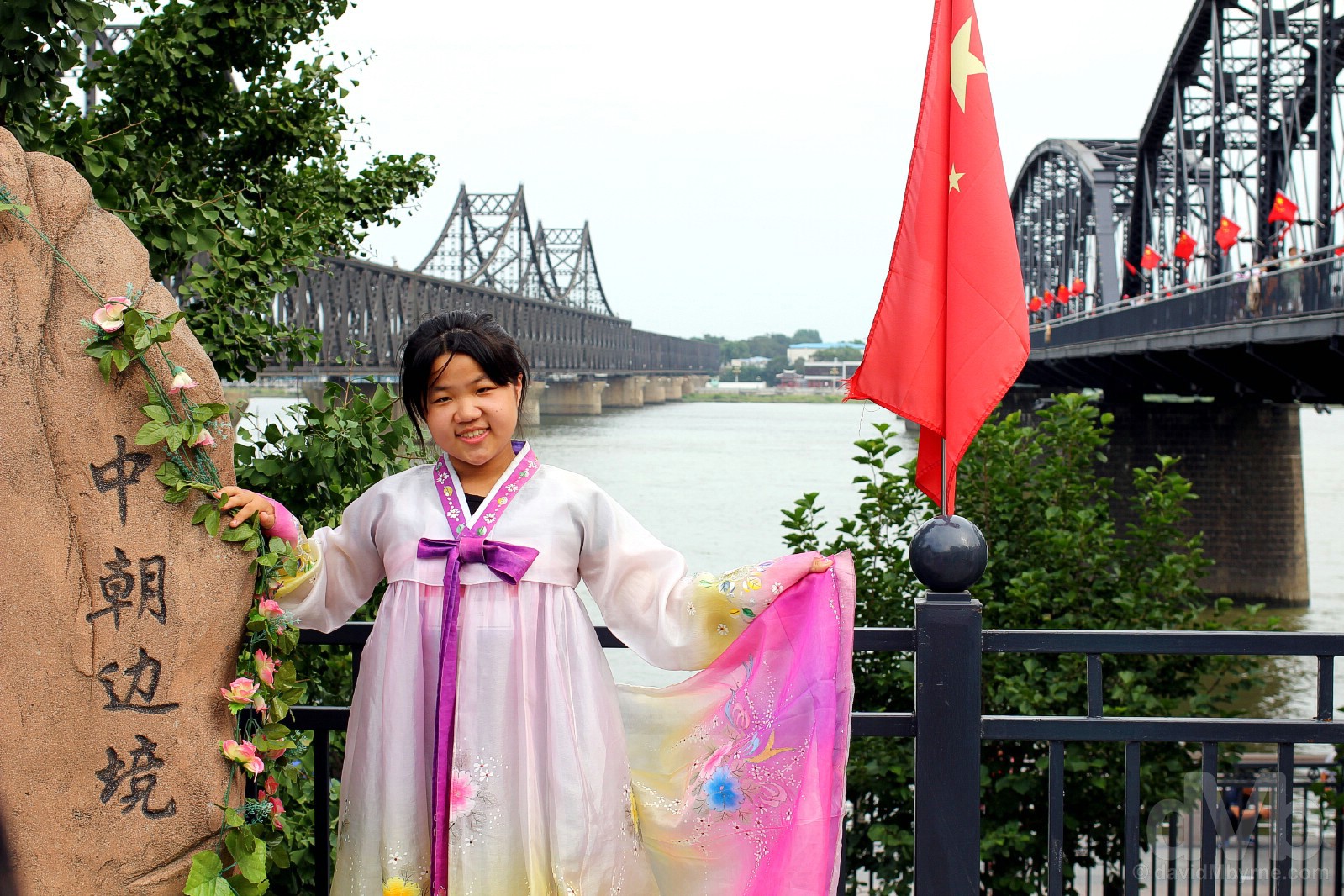 KOREA IN CHINA – HANBOK || A young Chinese girl posing in a traditional Korean hanbok by the edge of the Yalu River in Dandong, Liaoning Province, China. August 13, 2017.

The Chinese love pretending to be Korean when here in Dandong (and the Koreans love being Koreans). I guess it’s all part of the draw. 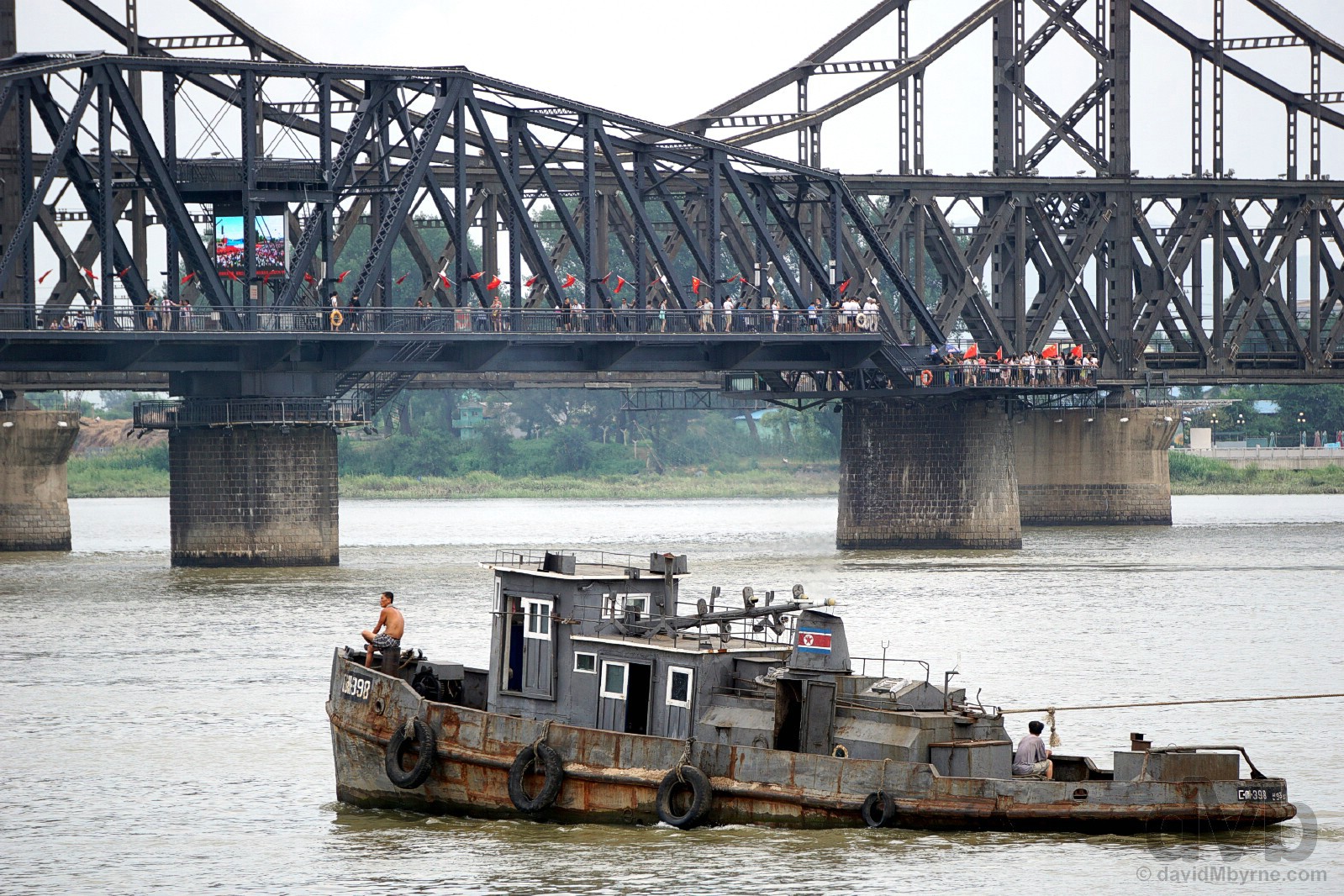 A North Korean-registered tug boat (spot the flag) plies the Yalu River with the Sino-Korean Friendship Bridge & the Broken Bridge in the background as seen from Dandong, Liaoning Province, China. August 13, 2017.

A few other captures from today in Dangdong, a city I spent a whole lot of time walking around. 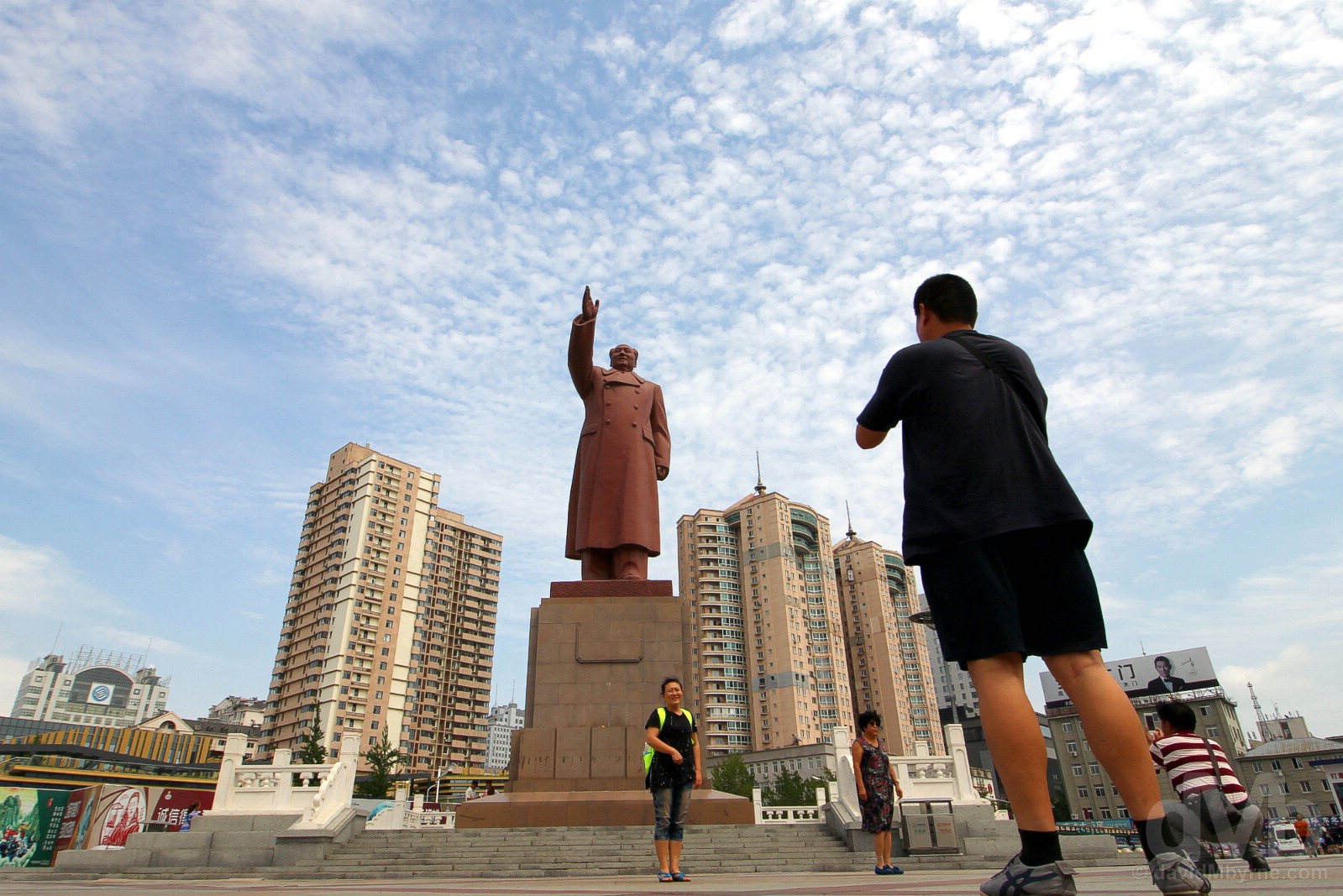 China doesn’t really do past communist dictator statues on the scale of say Russia, but this towering and unmissable Mao Zedong statue fronting Dandong’s train station would give any Lenin statue still standing anywhere in the vast former Soviet Union a run for its money. Needless to say, it provides quite the photo op. 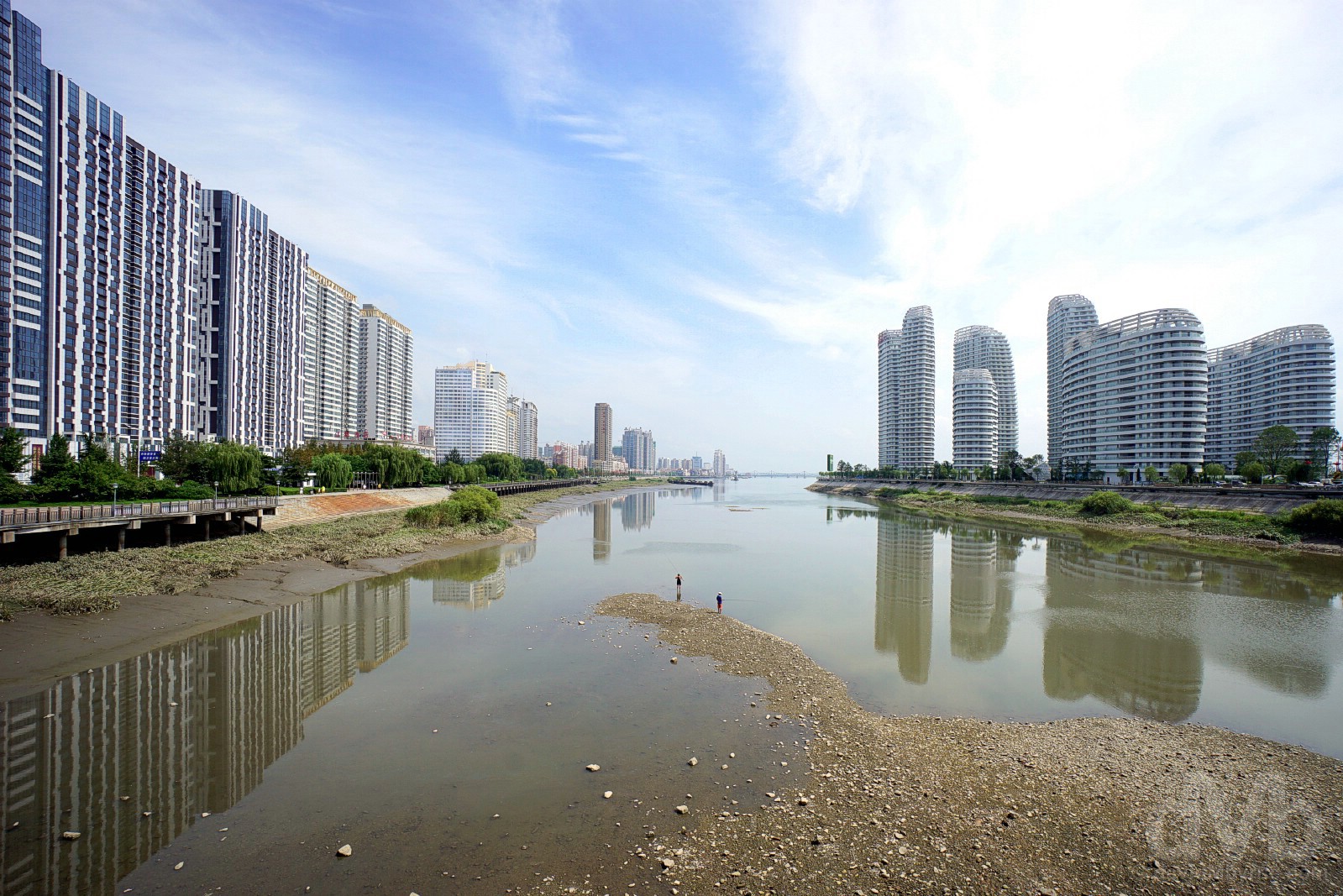 MOON ISLAND || Low tide on the Yalu River, the Fibre Residential District (left) and the towers of Moon Island (right) as seen from the bridge to Moon Island in Dandong, Liaoning Province, China. August 13, 2017.

Wow. Blue skies. A Chinese rarity. Add to the mix a few reflections and even this far-flung corner of China can look pretty.

Going The Extra Kilometre
Most who come here to Dandong are happy to ogle at North Korea from a distance. Few, relatively speaking, take the next step and cross the river to enter the regressive totalitarian dictatorship itself, a niche adventure to say the least (and the majority that do are Chinese). Tomorrow I’ll do just that, crossing the Sino-Korean Friendship Bridge via rail the short distance to Sinuiju train station where my North Korean odyssey will begin in earnest. But I can’t help but question my timing, something I don’t seem very good at with regard to North Korea. Two-and-a-half-years ago my initial attempt to get to the DPRK ended in frustration & inconvenience, my trip cancelled at the eleventh hour due to the Ebola outbreak in West Africa, a geographical region nowhere near the Korean Peninsula. This time regional tensions are high – are they ever? – with young & pigheaded Kim Jong-un, determined to push forward with military modernisation, lobbing missiles around the region for fun of late. People are worried, the South Koreans & Japanese in particular, and outcomes remain uncertain. The Stalinist state is also a tad miffed right now, irked by a recent increase in UN economic sanctions against it. Suffice to say it’s not the ideal time, if there is indeed an ideal time, to be paying a visit to North Korea. That said, it – my visit to North Korea – will be brief, but with the US military seemingly “locked and loaded” and with Trump threatening less than a week ago to rain down “fire and fury” on Pyongyang, where I’ll spend the next few days, here’s hoping my timing isn’t that bad after all.