The Sobering Site Of Humankind’s Most Extensive Experiment In Genocide

Auschwitz / Birkenau in Poland was the site of the largest of the World War II Nazi concentration camps, death camps produced at the height of Nazi oppression in Europe with the aim of systematically eradicating the races of society the Nazis deemed ‘sub-human’. The camp, located 50 kilomtres from Krakow near the Polish town of Oswiecim (Auschwitz in German), is a convenient day trip from Krakow. I’ve just spent a chilling – both physically & mentally – afternoon at the site, now a museum to the victims who died there. Touring the site reminded me of my visit to the Cambodian Killing Fields some years earlier. While the intent in Cambodia was no different, the procedure was less methodical and on a smaller scale when compared to the Nazi genocide operation in Europe. I was initially aiming to tour the site independently, but in hindsight I was glad I signed up for the 3-hour guided tour on offer; it gives a good overview of the two camp sites – Auschwitz & Birkenau – and I received a better insight into the horrors that were perpetrated here than I would have received otherwise.

It’s hard to explain what it’s like to visit a concentration camp, let alone one on the scale of Auschwitz. Enjoyable? Of course not. Sobering? Of course. Take what you will from what follows, a pictorial look at my visit to the darkest remnant of one of the darkest periods in human history. 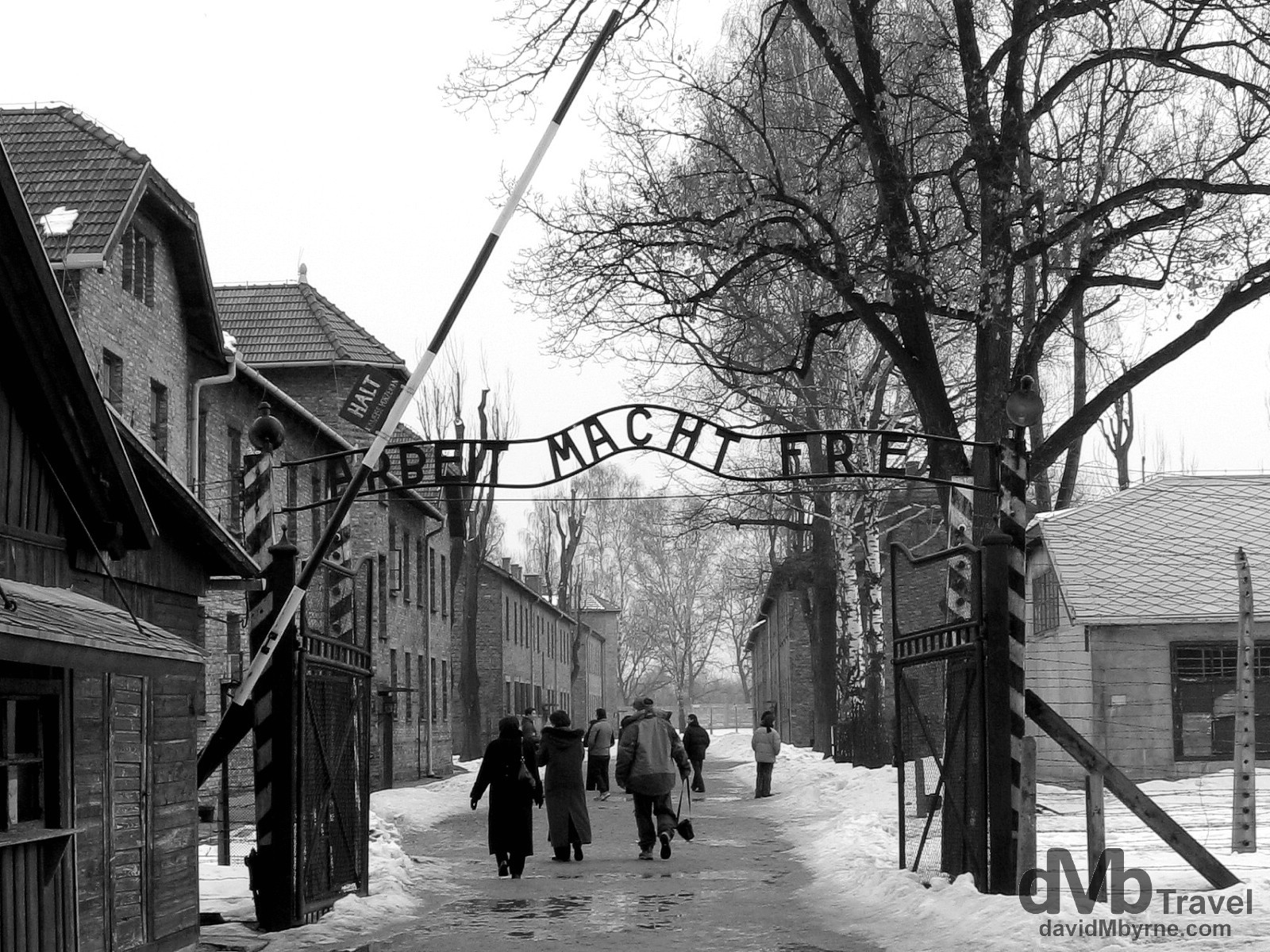 The infamous main entrance to the first, and smaller, of the 2 concentration camps, a.k.a. Auschwitz I, created in the town of Oswiecim, some 50 kilometres west of Krakow. It was through this gate that the working prisoners, the lucky ones, were marched each day on their way to and from work. The cynical German inscription reads Arbeit macht frei, which translates into ‘work brings freedom‘. The State Museum in Oswiecim (Auschwitz) (

In 1941, SS Reichsfuhrer Heinrich Himmler singled out the town of Oswiecim as the perfect location for the site of the proposed eradication of, among other undesirable elements of society, the Jewish population. The motives behind his decision were made clear in a memo to camp commandant Rudolf Hoss.

The existing extermination centres in the East are not sufficient to cope with an operation on such a scale. Therefore I have designated Auschwitz for this purpose, both because of its convenient location as regards communication and because the area can easily be isolated and camouflaged.

Commonly referred to as Auschwitz I, this camp quickly outgrew its capacity and a bigger, purpose-built camp (Birkenau, or Auschwitz II) was soon created 3 kilometres west across town from here to meet the demands. Between 1940 and 1945, these 2 camps, along with a 3rd relatively unheard of camp (Monowitz) further west of Oswiecim, were the locations of the most extensive experiment in genocide in the history of humankind – it is estimated that 1.5 to 2 million people died here between April 1940 and January 1945, about 90% of which were Jews. The sites now house the State Museum in Oswiecim. First opened in 1947, it does a wonderful job detailing the horrors perpetrated here. 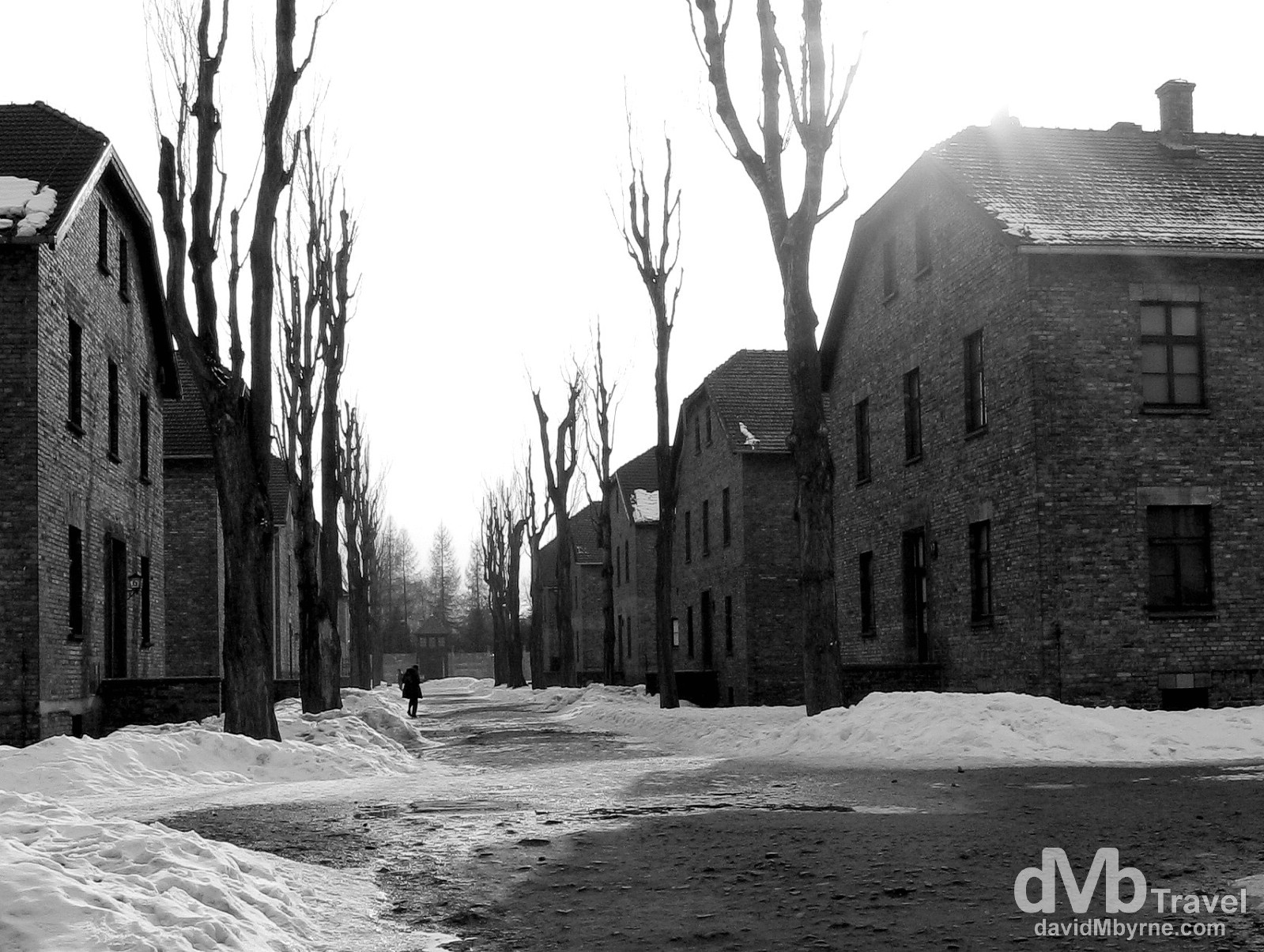 Auschwitz I was built on the site of an old Polish army barracks. Initially the camp comprised 20 buildings/blocks, some of which are seen here & which today house the State Museum of Oswiecim. Various expansions, using camp slave labour, saw the capacity of the camp reach 20,000 in 1942 prompting the need for the 2nd & (much) larger camp of Birkenau, a.k.a. Auschwitz II. The State Museum in Oswiecim (Auschwitz), Poland. March 7, 2006. 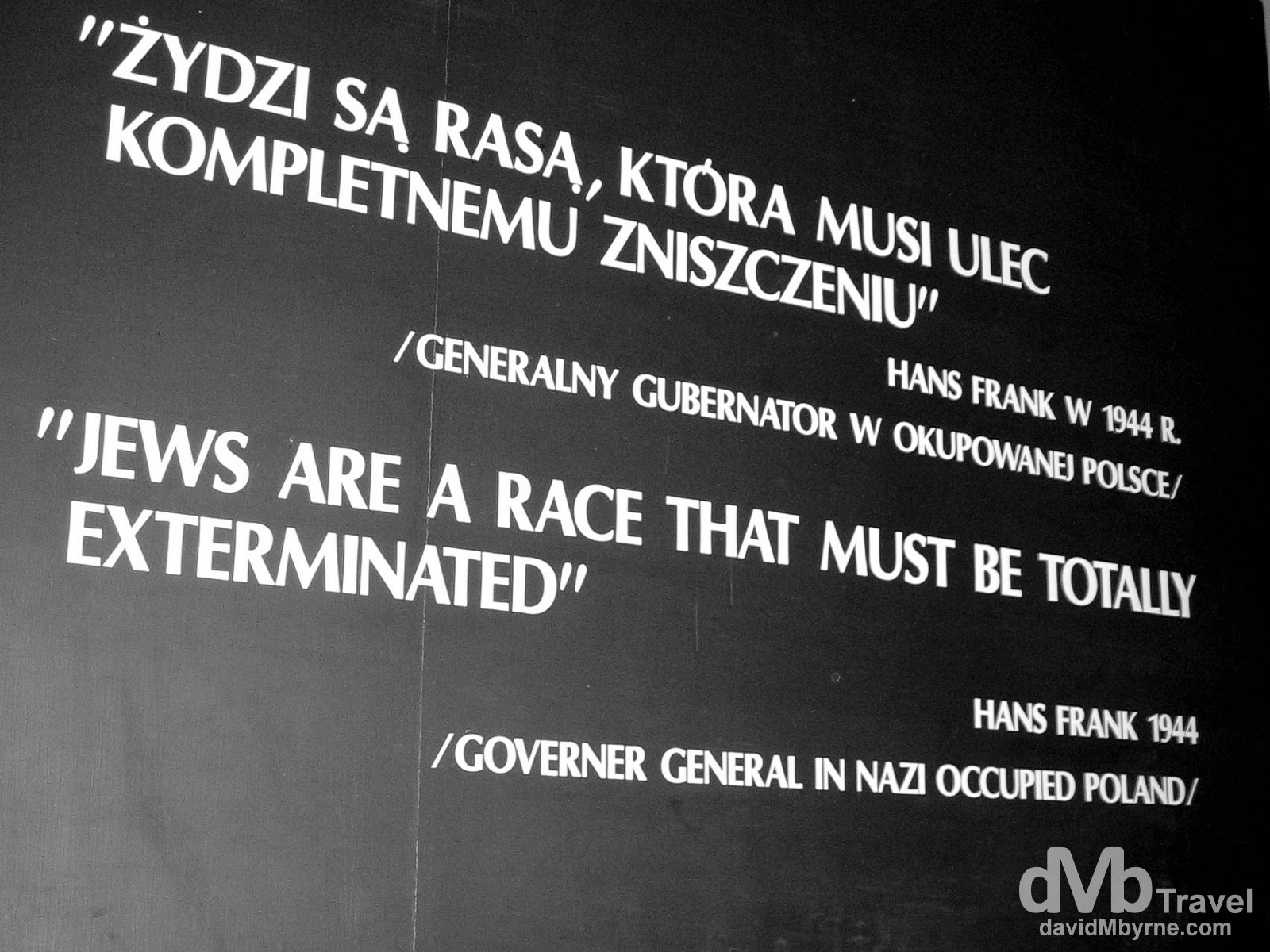 A quote on the walls of one of the buildings of Auschwitz I. The State Museum in Oswiecim (Auschwitz). Oswiecim, Poland. March 7, 2006. 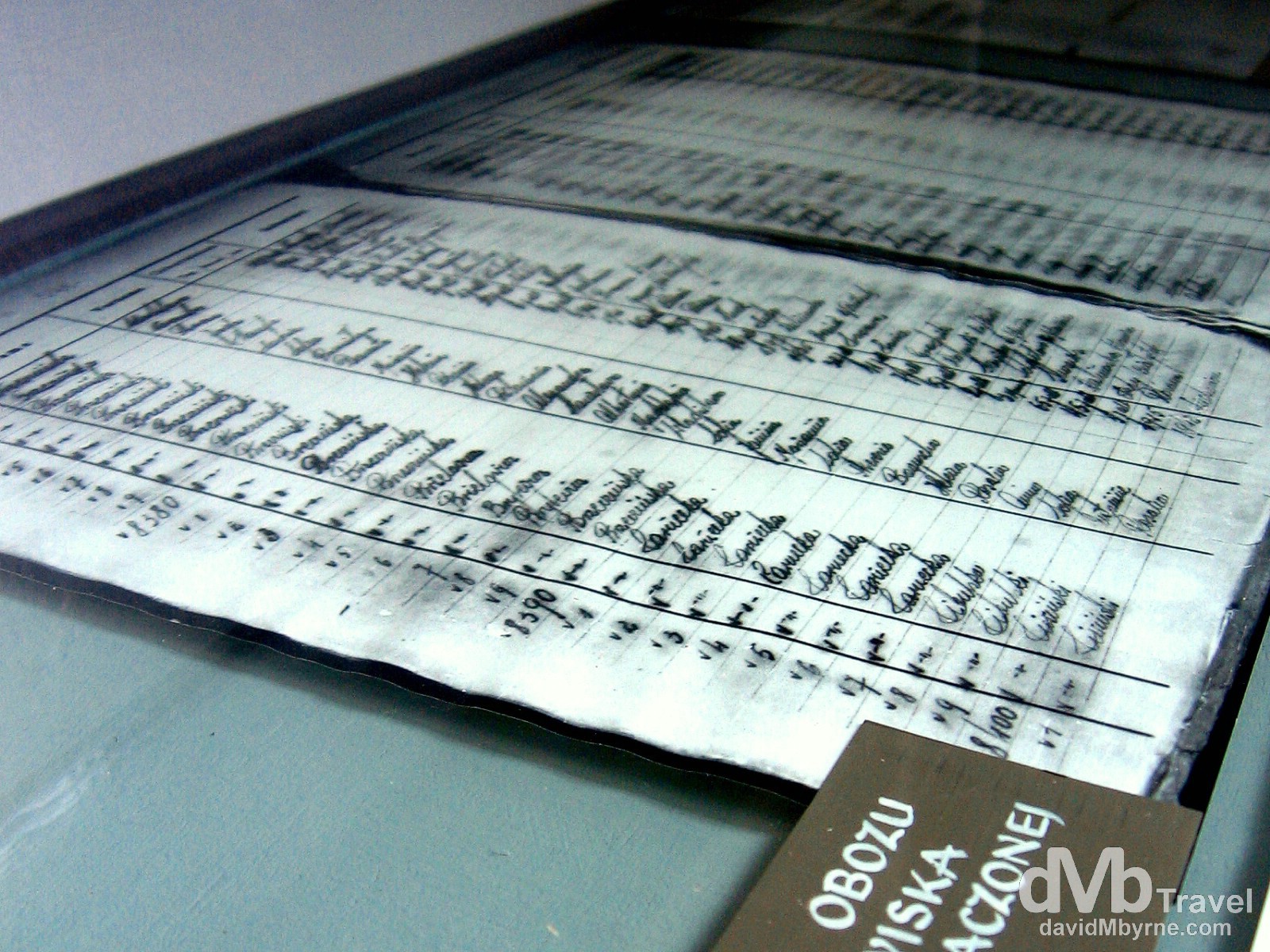 One of the proofs of the Nazi crimes are the many so-called Books of Death, photocopies of which are on display here in the museum. Columns show, in 5-10 minute intervals, fictitious causes and times of death. The majority of people deported to Auschwitz were killed in gas chambers and cremated immediately upon arrival without registration or identification. It is thus very difficult to determine precisely how many perished here – conservative estimates put the total at between 1.5 and 2 million, but the true number will never be known. Block 4 of The State Museum in Oswiecim (Auschwitz), Poland. March 7, 2006. 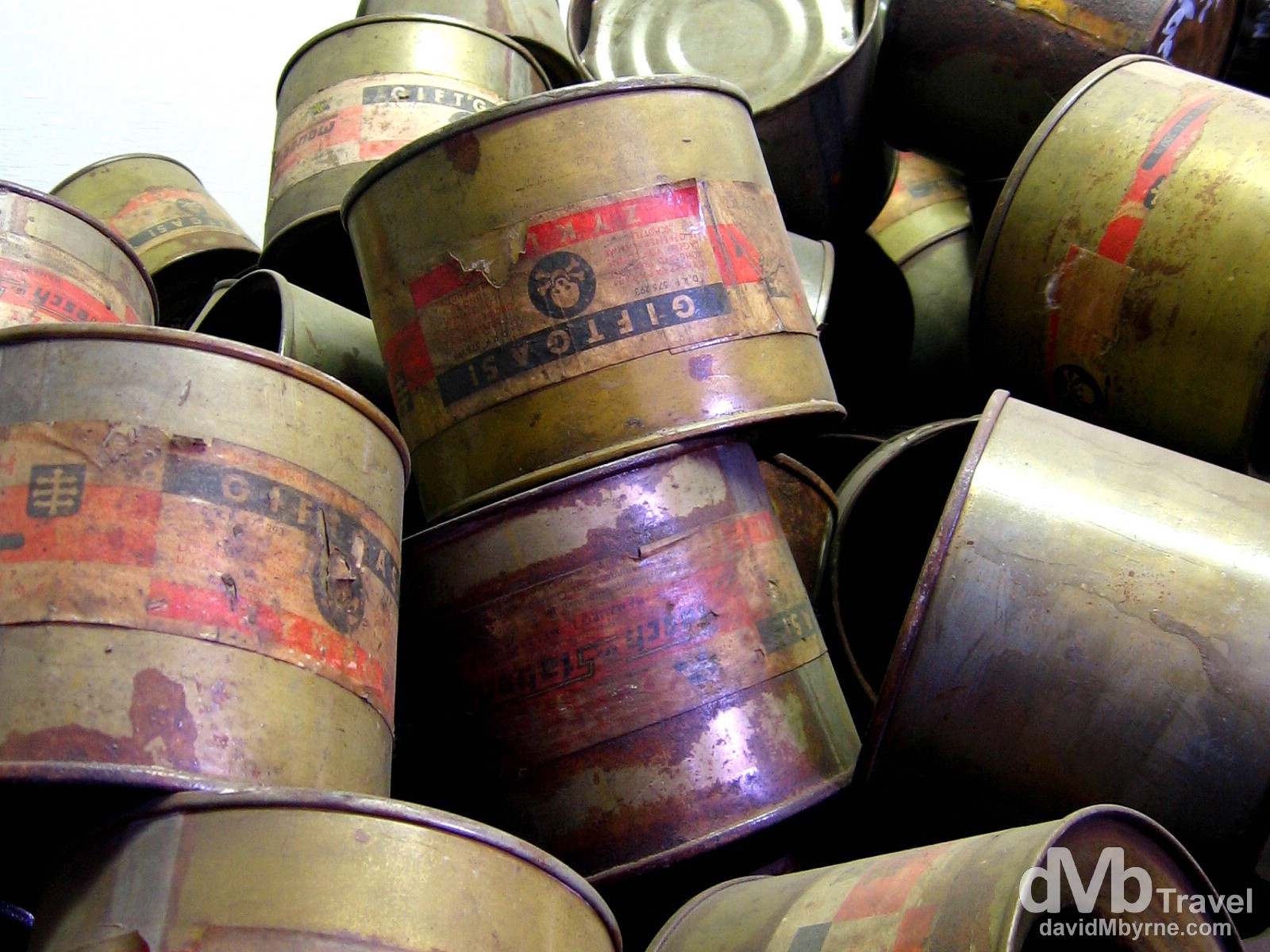 Almost 20 tons of Cyclon B poison was used in Auschwitz gas chambers between 1942 and 1943 alone resulting in tidy profits for the manufacturers, Degesch. Approximately 10 kilograms of the poison was poured into the gas chambers at any one time through special openings in the ceiling, a sufficient amount to ensure all 2,000 people crammed into the room of 235 sq. yards, believing it to be a mass shower, were dead within 15-20 minutes. Today Block 4 of the State Museum of Oswiecim displays piles of used Cyclon B canisters as well as an order authorising collection by lorry of fresh loads (piles of unused cans of Cyclon B crystals were found in warehouses when the camp was liberated by the Soviets in January 1945). The reasons given for their use were always false, i.e. in order to assist the “resettlement of Jews”. Block 4 of The State Museum in Oswiecim (Auschwitz), Poland. March 7, 2006. 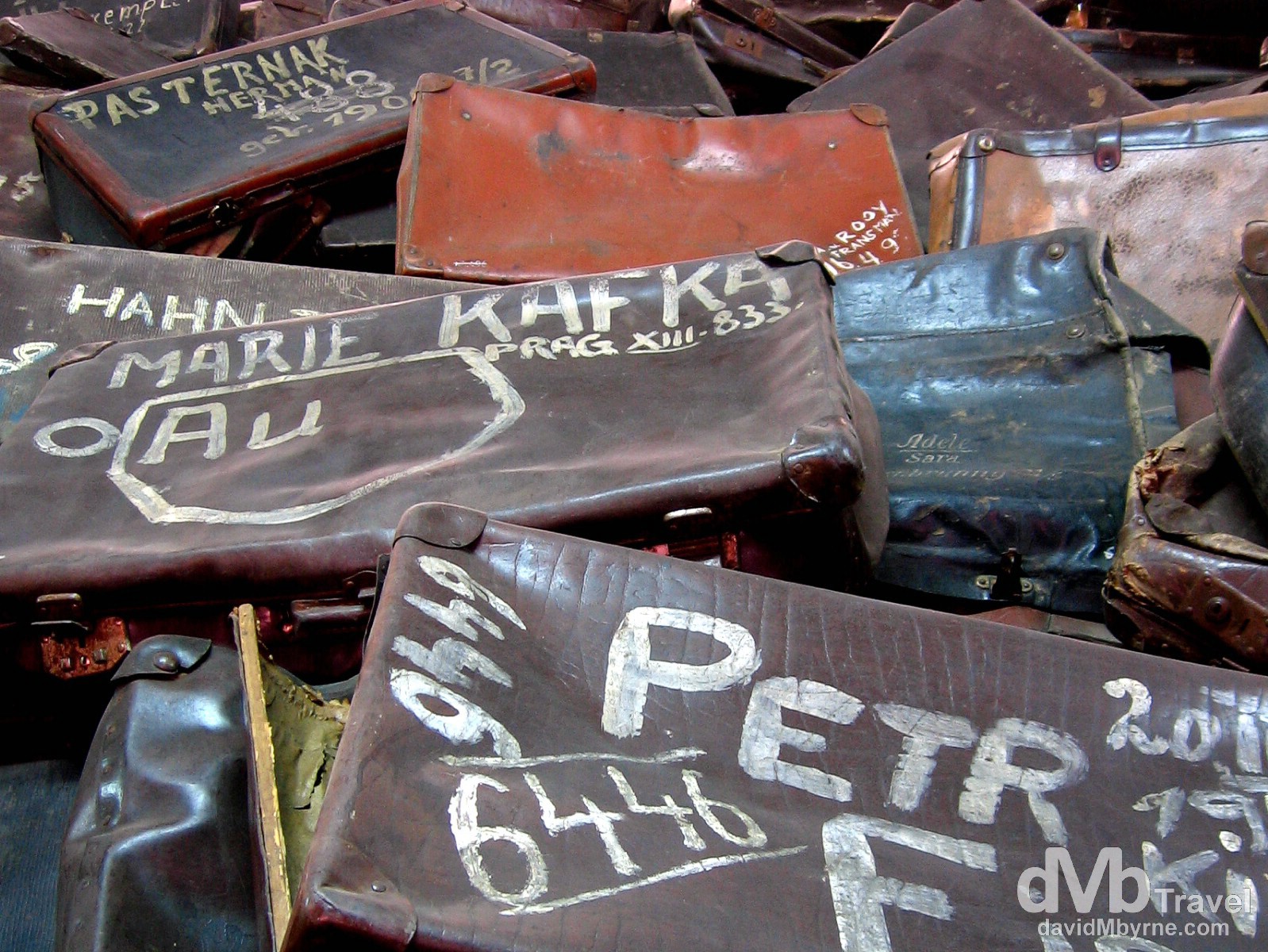 Most of the Jews condemned to death in Auschwitz arrived convinced they had been deported for “resettlement” in Eastern Europe. In particular, Jews from Greece and Hungary were deceived in this way – the Nazis sold them non-existent plots of land, farms, shops or offered them work in fictitious factories. For this reason the deportees always brought their most valuable possessions with them. All personal effects brought to the camps by the deportees were sorted into piles and, before being shipped to the Fatherland, were stored in camp warehouses. A few days before liberation, and in a desperate attempt to obliterate all traces of their crimes, SS men set fire to the warehouses, some of which, & for whatever reason, didn’t burn to the ground. These storage spaces housed piles and piles of shoes, clothes, brushes, bowls and spectacles, pretty much anything the Nazis could recycle to help bolster the war effort back home. Today some of these items are on display in the museum. When seen on mass like this pile of personalised luggage cases it brings a sense of scale of the unthinkable crimes that were perpetrated here. Block 5 of The State Museum in Oswiecim (Auschwitz), Poland. March 7, 2006. 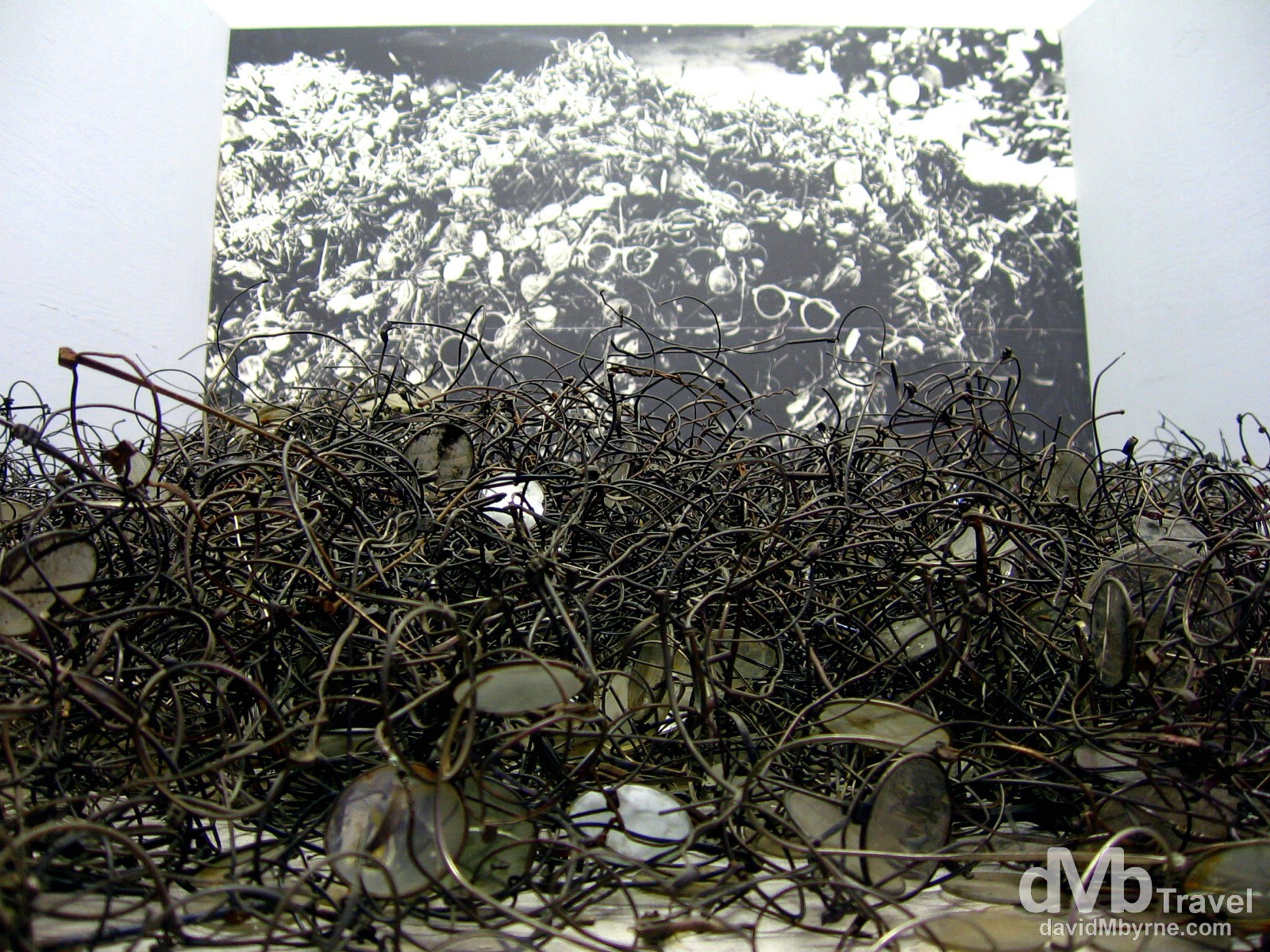 Confiscated glasses/spectacles of victims on display in Block 5 of The State Museum in Oswiecim (Auschwitz), Poland. March 7, 2006. 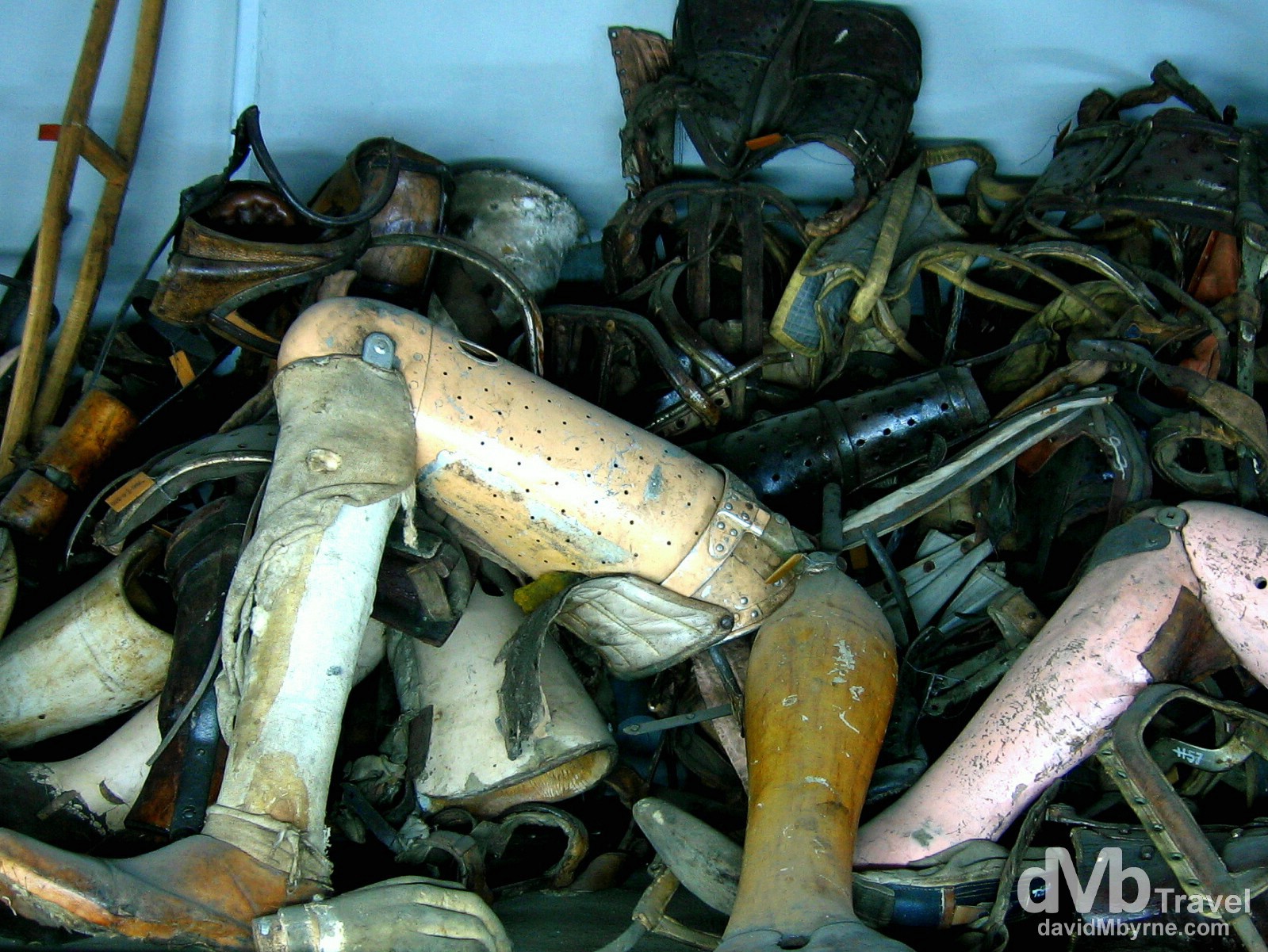 It wasn’t only material effects that were taken from the camp inmates. Hair was shaved off and shipped to the Fatherland (human hair was used by the Reich for various war needs), teeth fillings and prosthetic limbs, shown here, were removed. Anyone with any kind of a handicap was deemed ‘unusable’ and was killed immediately upon arrival at the camp. When the inmates first arrived they were examined by SS doctors, most as soon as they stepped off the train. According to a statement by the camp commandant, Rudolf Hoss, around 70-75% of the total examined were, for various petty reasons, deemed unusable and were sent straight to the gas chambers. Block 5 of The State Museum in Oswiecim (Auschwitz), Poland. March 7, 2006.

We must free the German nation of Poles, Russians, Jews and Gypsies.

– Otto Thierack, Minister for Justice of the Third Reich 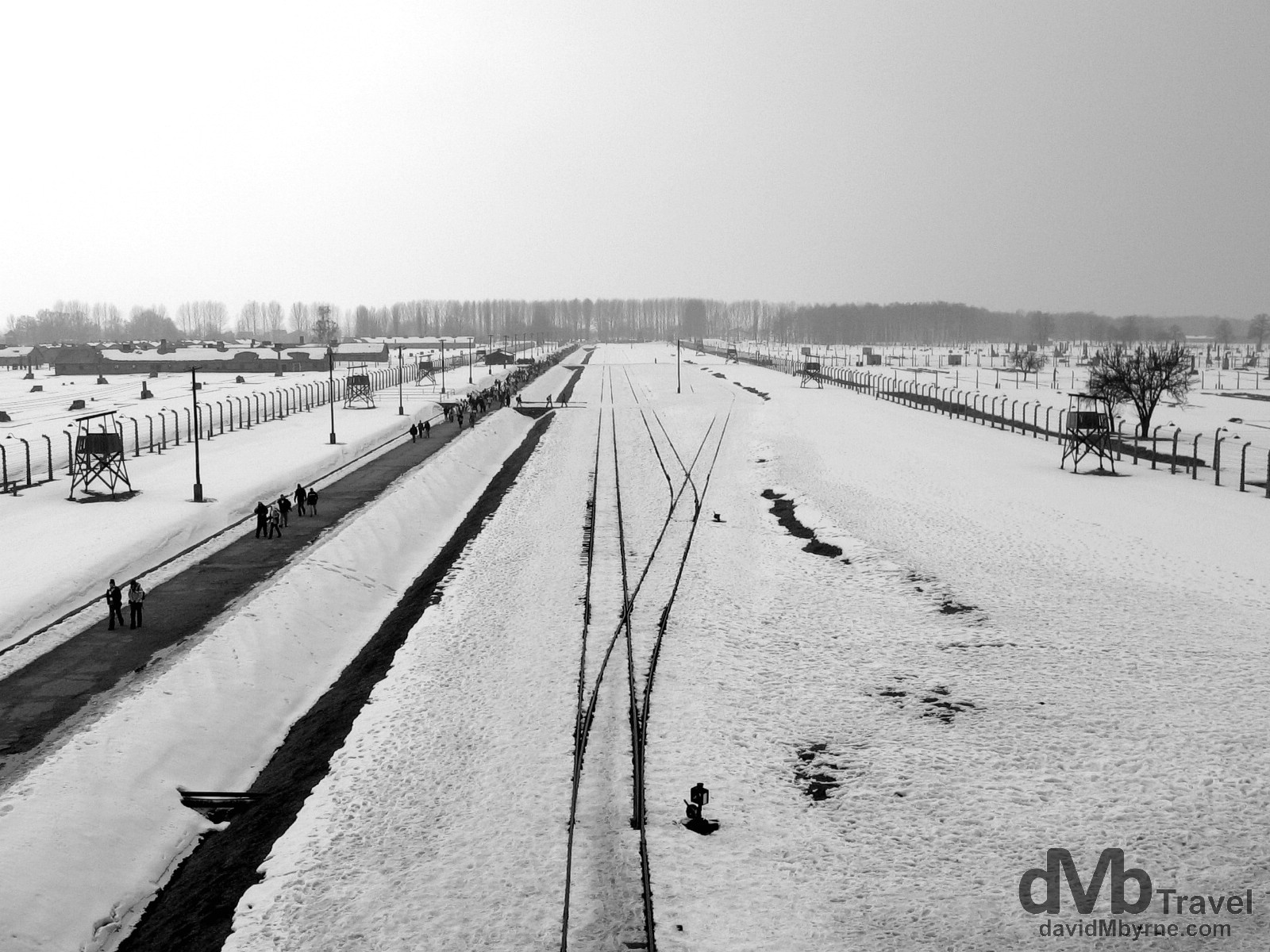 It was actually at Birkenau, or Auschwitz II, 3 kilometres west of Auschwitz I, where most of the killing took place. Built due to the small and inadequate size of Auschwitz I, this purpose-built camp had over 300 prison barracks and could hold up to 200,000 inmates. Although most of the camp was destroyed by retreating Nazis, the most important remaining constructions are the remnants of the 4 huge gas chambers and matching crematoria at the rear of the camp (in the far distance); each chamber could accommodate 2,000 people. I took this photo from the viewing platform above the main entrance of the camp. It provides a great prospective of the whole 175 hectares site and provides some idea of the scale of this heinous crime. It was through this entrance that the trains from various parts of Europe would enter the camp. They would then unload their cargo of deportees at the special loading platforms for examination by the SS doctors. Those deemed fit enough would be sent to the makeshift accommodations on either side of the train tracks and those deemed unsuitable would be sent straight to the gas chambers. Birkenau Concentration Camp, Brzezinka, Poland. March 7, 2006. 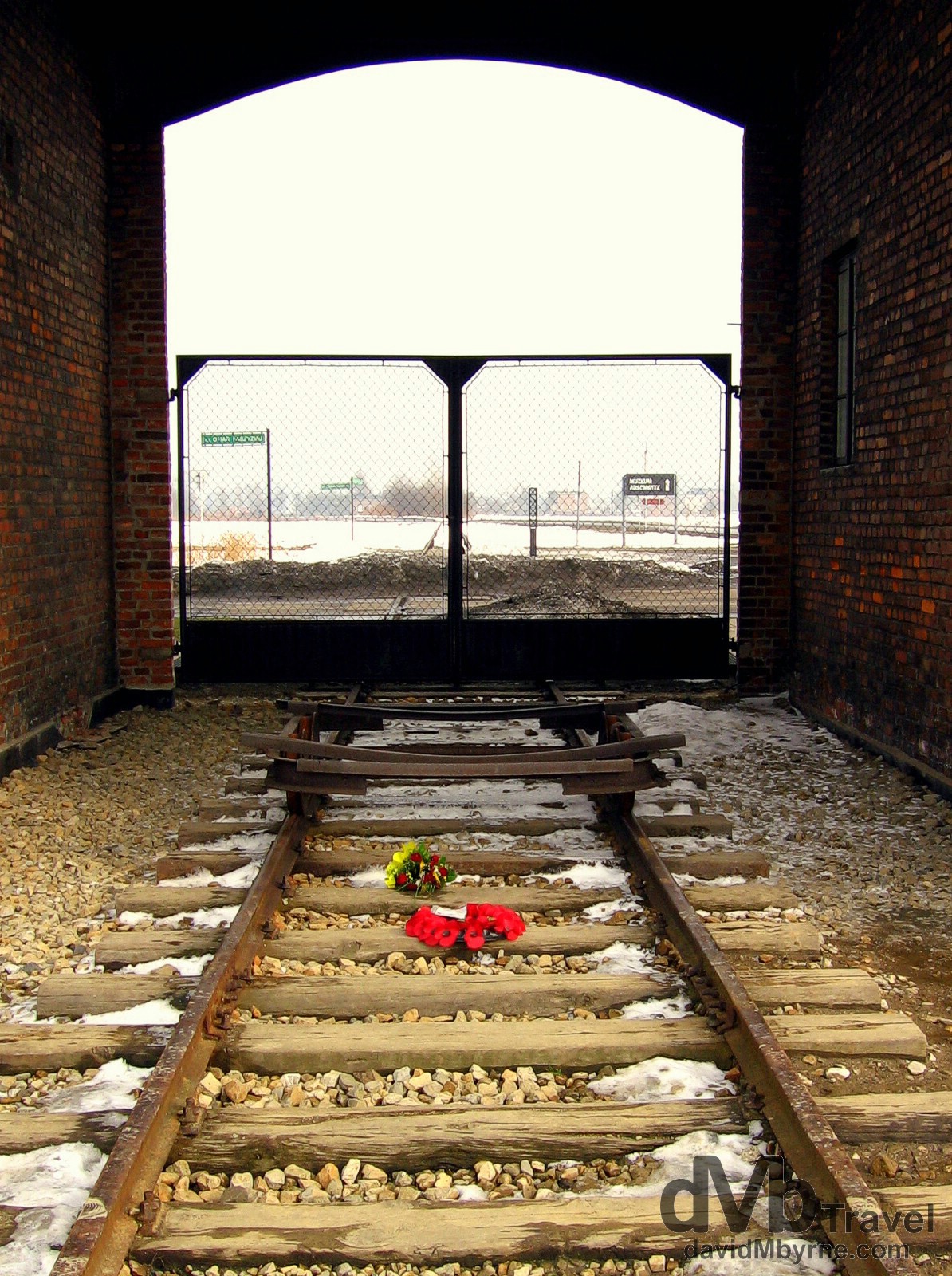 Two small bouquets on the tracks at the entrance to the Birkenau Concentration Camp, Brzezinka, Poland. March 7th 2006. 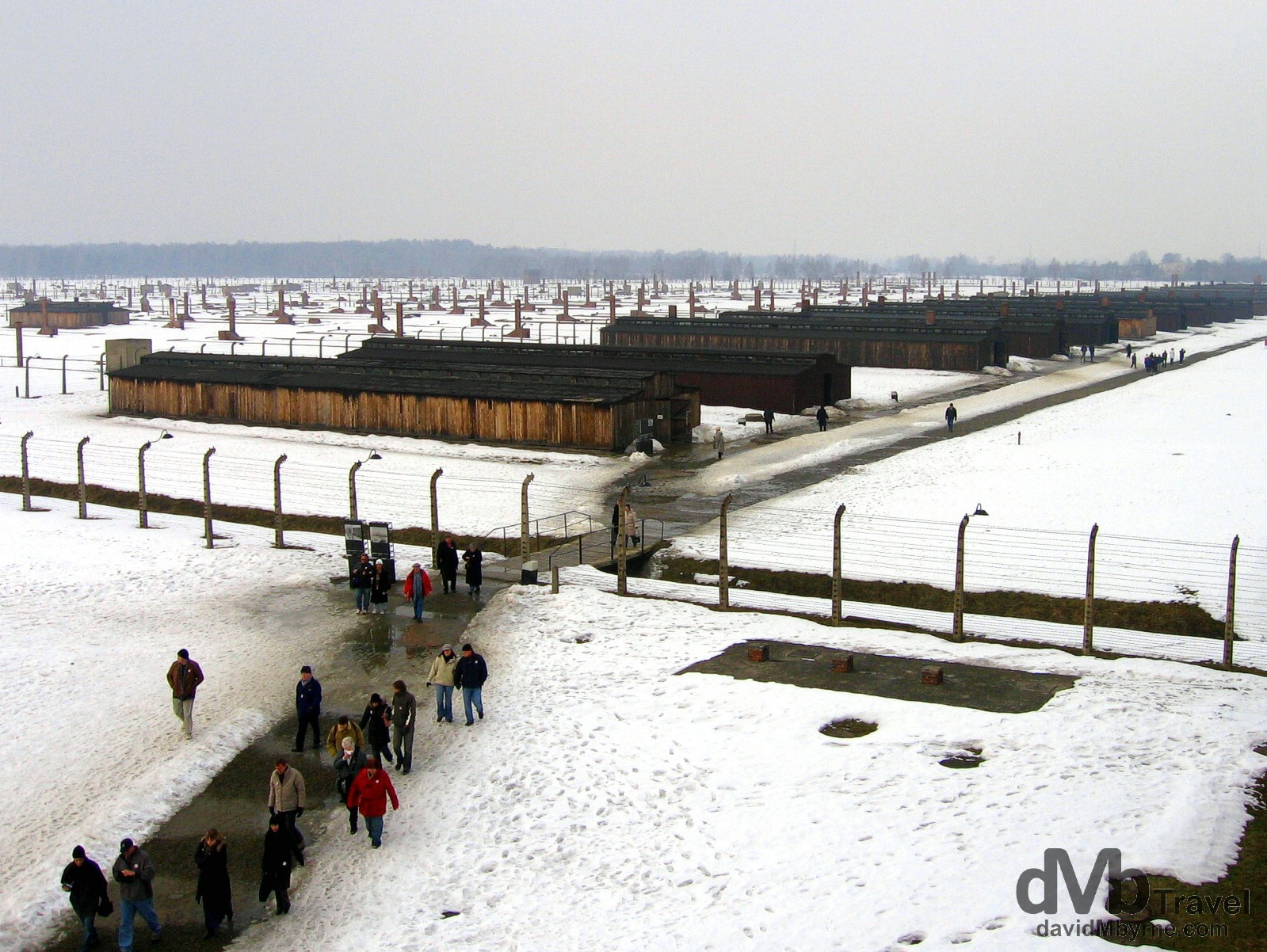 The remains of the makeshift accommodations of the Birkenau Concentration Camp as seen from the the viewing platform above the main entrance of the camp. Of the 300 original site buildings, 67 still stand today, 45 of which made of brick and 22 of wood. These buildings once served as field stables and after minimum modifications they were used to house up to 1,000 prisoners in 3 tier wooden bunks. Needless to say the living conditions were beyond deplorable. The camp inmates were plagued by lack of water, terrible sanitary conditions, a huge number of rats and, in the winter, freezing temperatures. All these combined with the harsh work requirements, poor nutrition and hygiene led to high death rates among the prisoners who were lucky enough to escape the gas chambers. Birkenau Concentration Camp, Brzezinka, Poland. March 7, 2006. 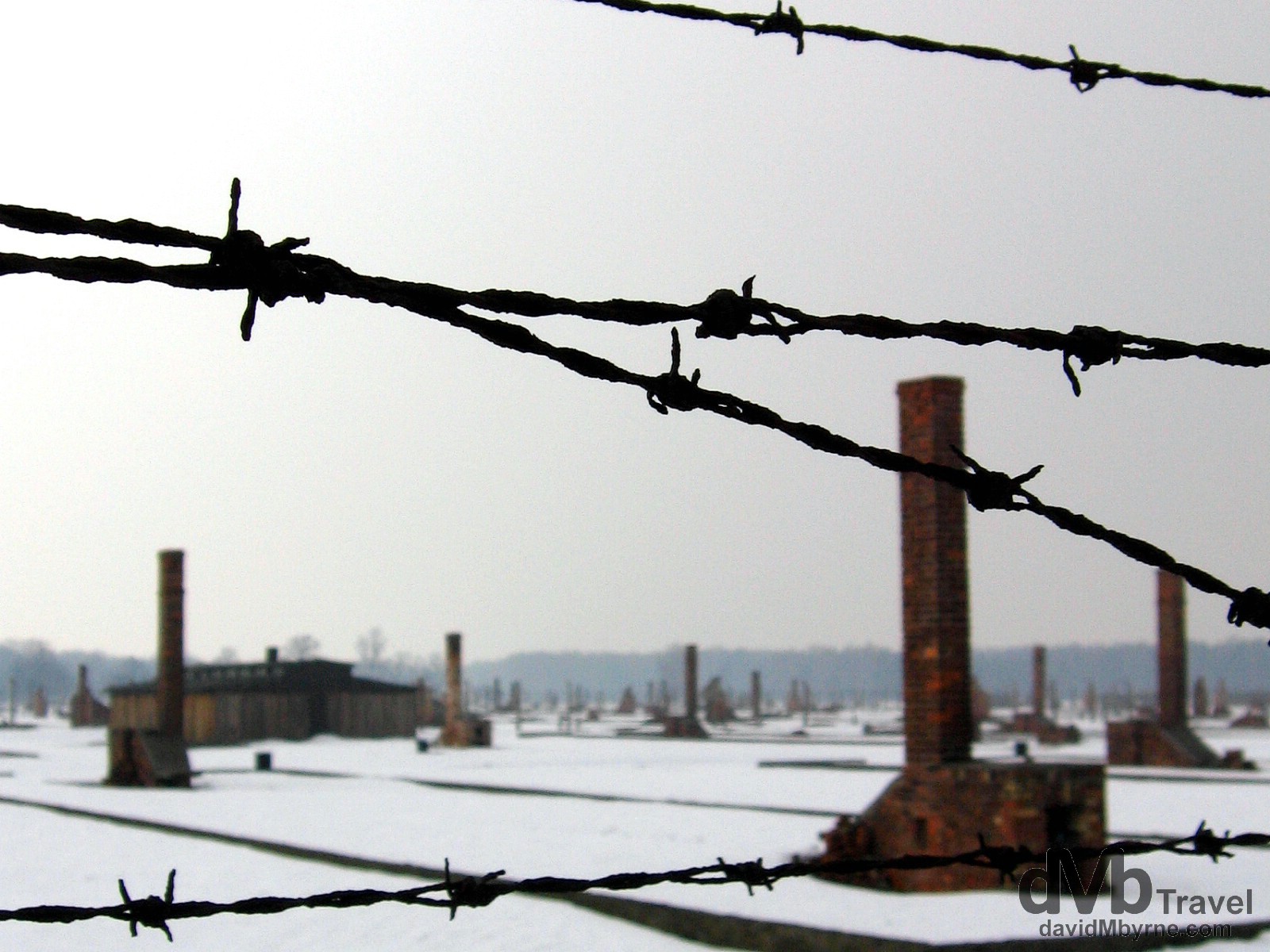 A picture showing the remnants of a chimney flue where once a wooden building had stood – these were either burnt down or demolished by the retreating Nazis. It was envisaged that sufficient heating in the buildings would be provided via smoke from the chimney flue. However, this was totally inadequate and many of the weakened inmates died from hypothermia during the bitterly cold winter months. Birkenau Concentration Camp in Brzezinka, Poland. March 7, 2006. 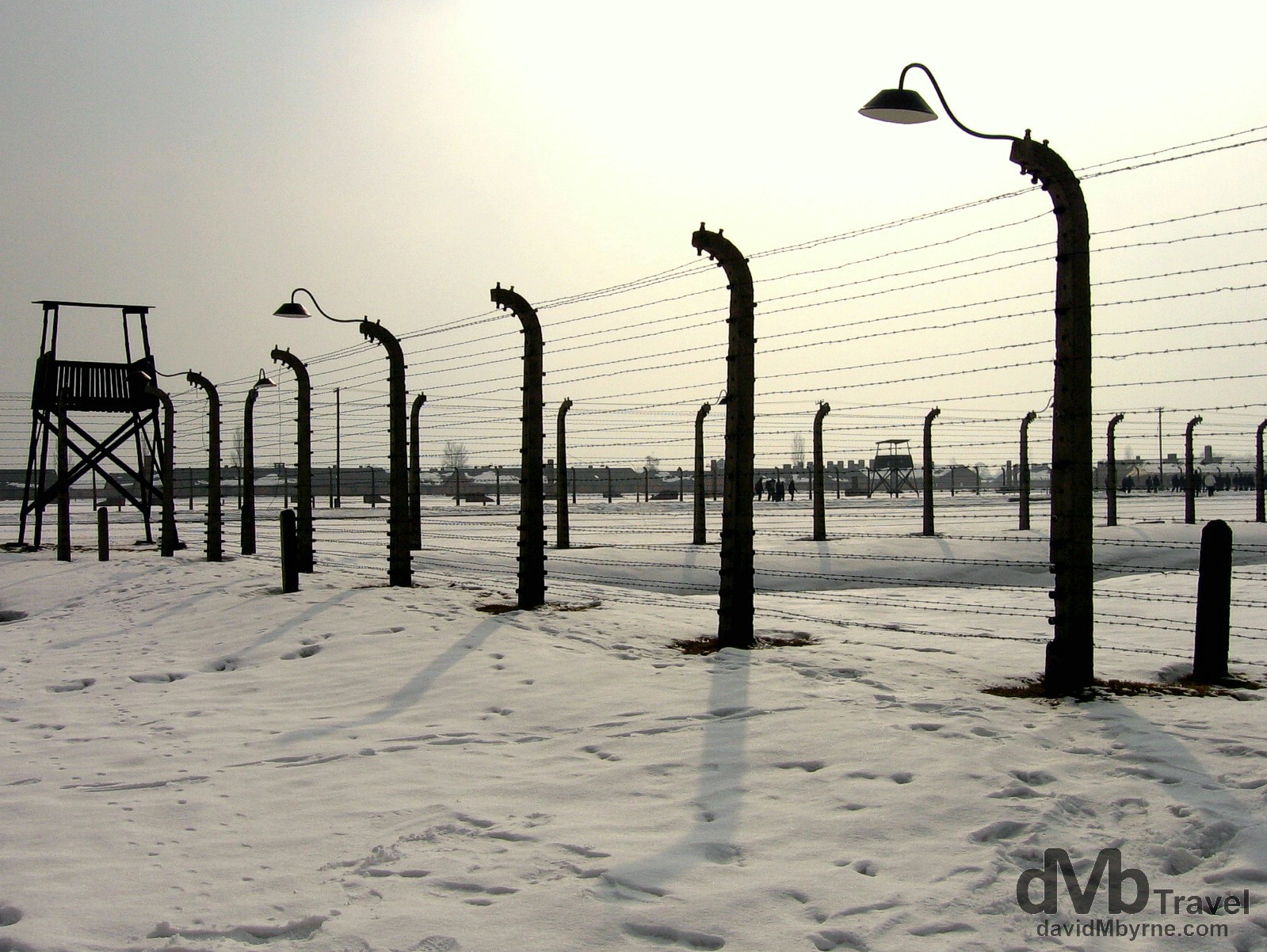 All over the camp are watch towers and barbed wire fencing, most of which has been untouched since the day the Russians liberated the camp on January 27, 1945. Birkenau Concentration Camp, Brzezinka, Poland. March 7, 2006. 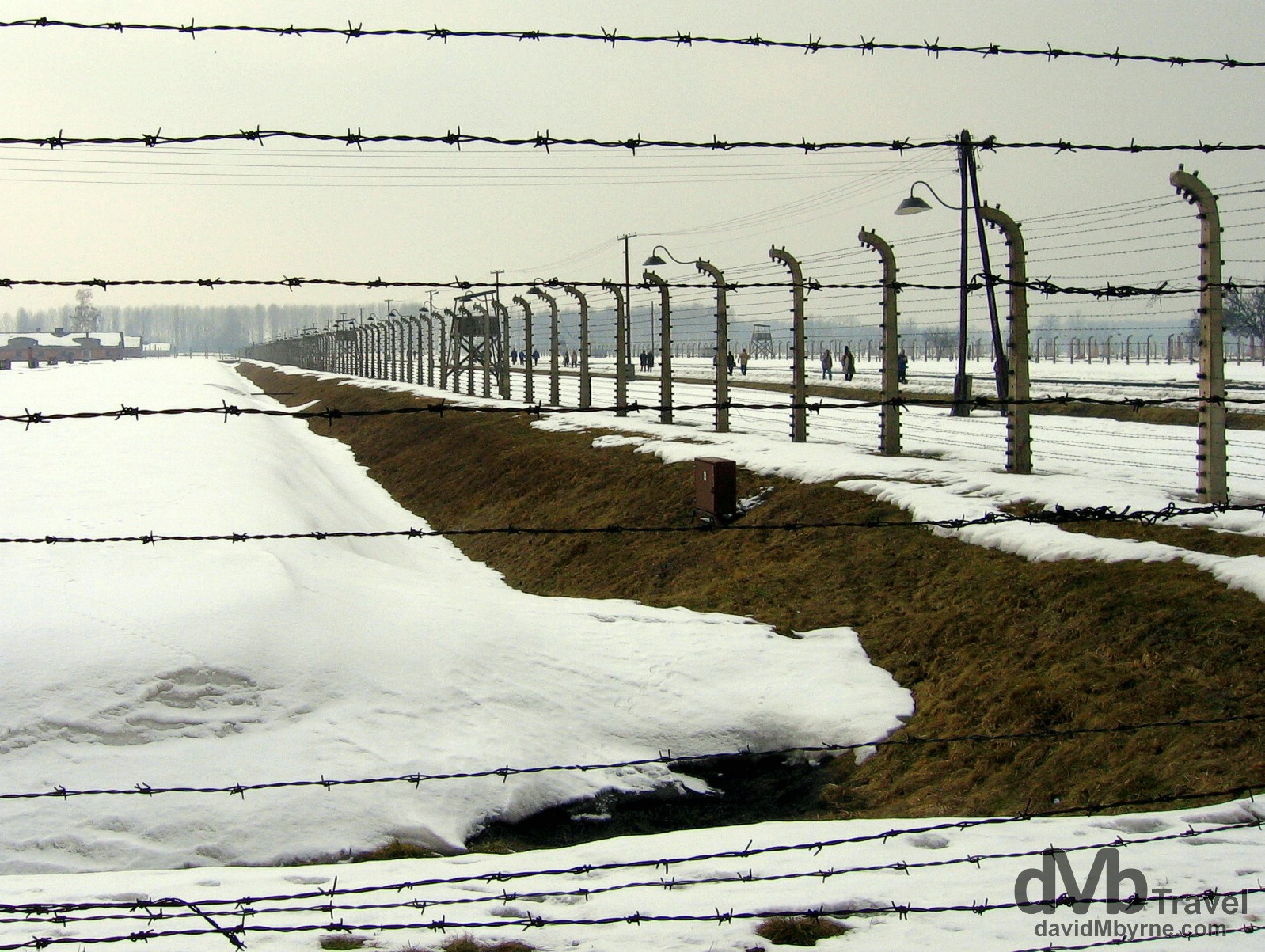