One of the world’s oldest civilizations and the world’s very first Christian nation, Armenia is a landlocked republic in southwestern Asia. Formerly an Asian soviet, the country impresses with a pretty capital & an array of medieval UNESCO World Heritage-listed church & monastery complexes.

Read all postings from the road in chronological order or jump to specific postings using these links.

Posts From The Armenian Road (Presented In Chronological Order)

I arrived in Yerevan, Armenia, early yesterday off the overnight train from Tbilisi in Georgia. I leave the city later today. It was only ever going to be a quick visit to the capital of one of the world’s oldest cultures and the capital of the country that was the world’s first Christian nation – Armenia nailed its colours to the Christian cross in the early 4th century (the official date is 301 AD) becoming the first state in the world to adopt Christianity as its official religion. So needless to say there’s plenty of religious history here. Maybe not in the laid-back, cafe culture capital (ironically Yerevan’s largest church is one of the city’s newest structures) but certainly where I’m headed, the village of Alaverdi in the north of the country. There are plenty of ancient remnants of the Christian past in the hills around there, or so I’m led to believe, mostly churches & monasteries, some of which are even UNESCO World Heritage-listed. I’ll explore those tomorrow but for now here’s a few pictures from yesterday & today, pictures from the limited time I gave myself taking a look around the Armenian. 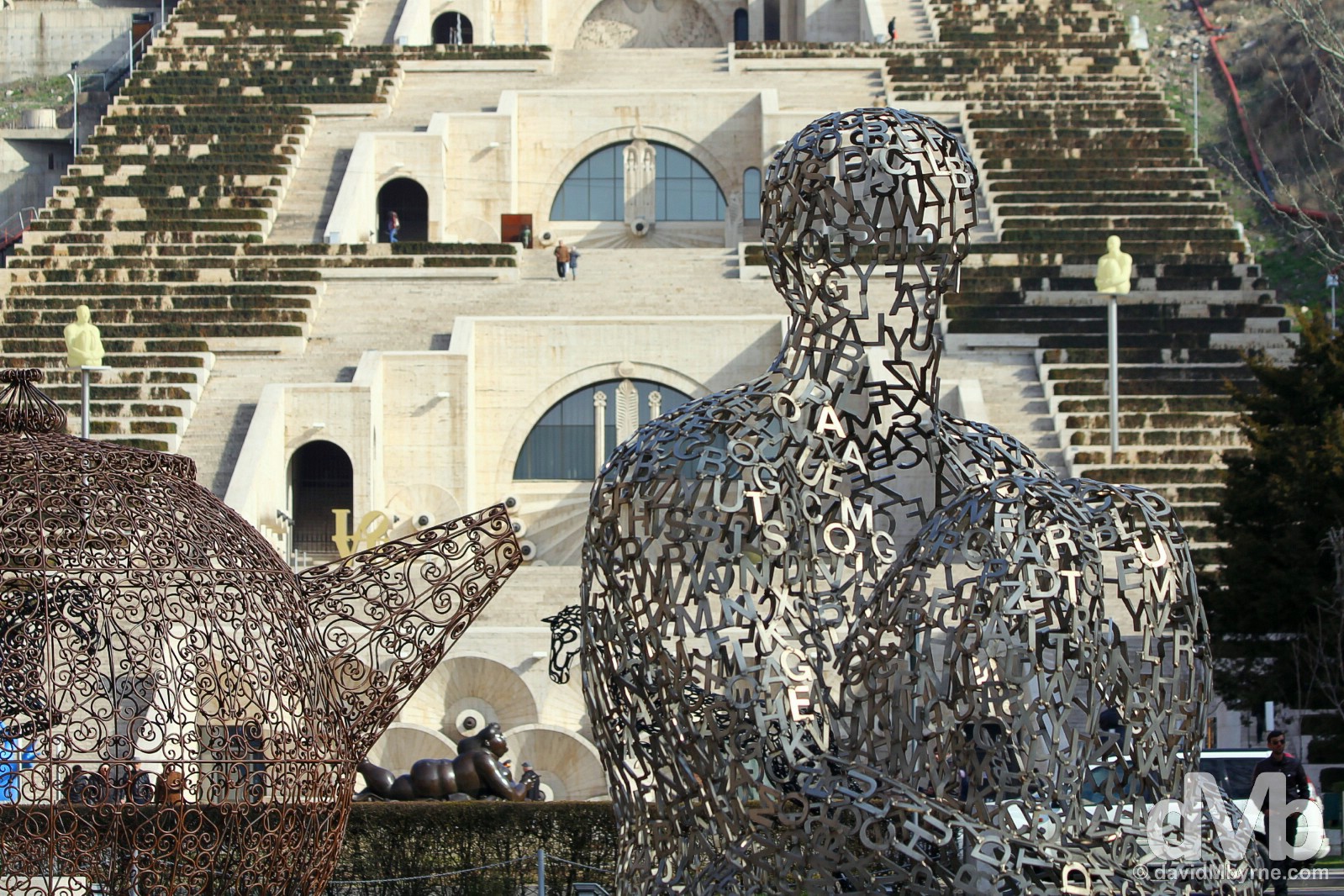 CASCADE – KNEES-UP || Art fronting the Cascade in central Yerevan. Probably the city’s most iconic sight, the Cascade is a vast hillside structure of five flights of stone steps dotted with various art forms (statues, sculptures etc.) & flowerbeds. It was raining when I first climbed the structure yesterday. Today, however, the sun was out so I paid another visit & captured this picture of some of the art fronting the Cascade including this 2006 piece on the right, my favourite piece on display. Entitled Shadows I & by Spanish artist Jaume Plensa, it’s made of steel letters & depicts a larger-than-life seated human figure with their knees up. Yerevan, Armenia. March 25, 2015. 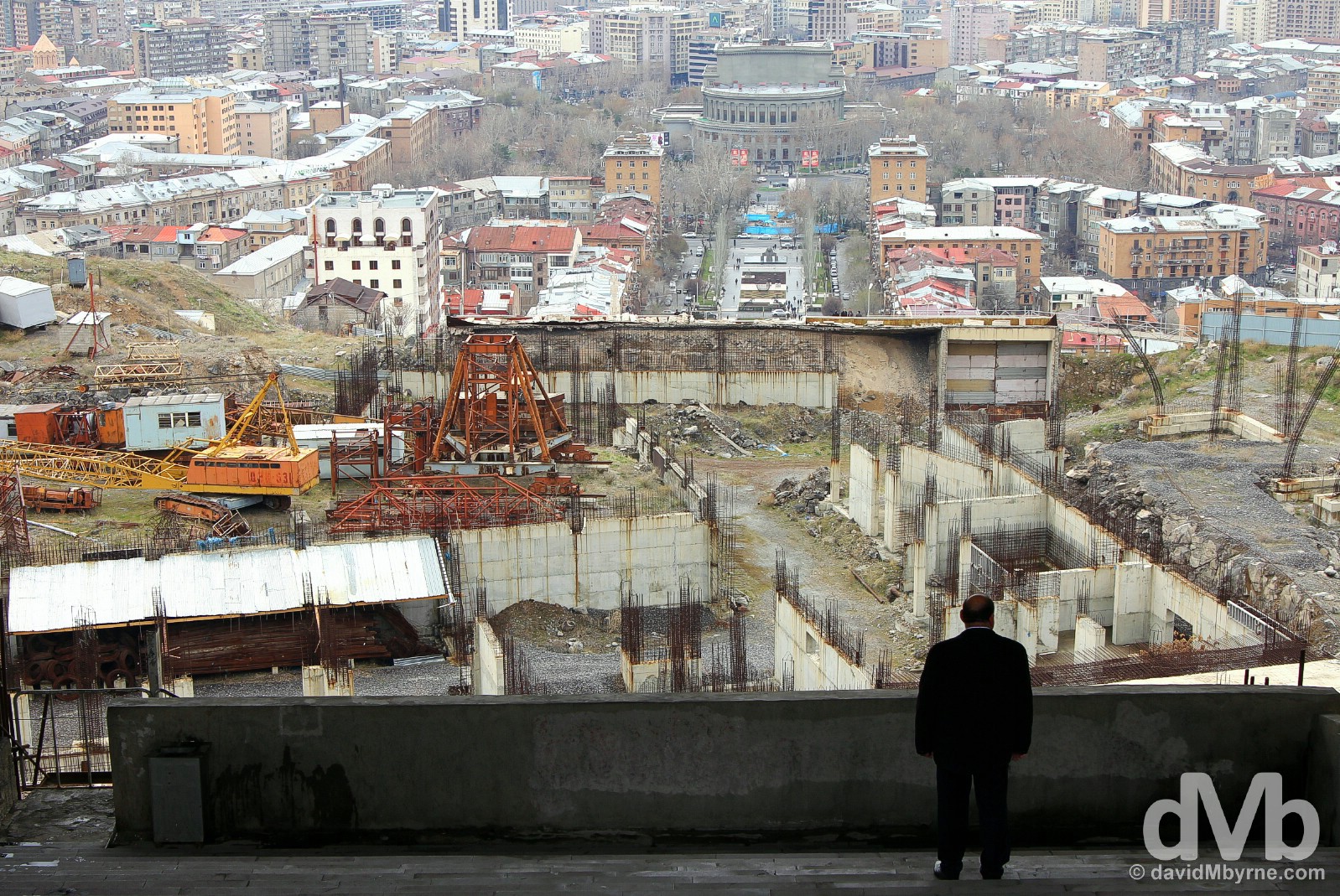 At the very top of the Cascade is the rather tall & ugly 50th Anniversary of Soviet Armenia Monument. From here the views down over the city are rather special assuming, of course, you look beyond the unfinished construction site in the foreground that connects the top of the Cascade to the monument itself, something that is admittedly hard to do. Yerevan, Armenia. March 24, 2015. 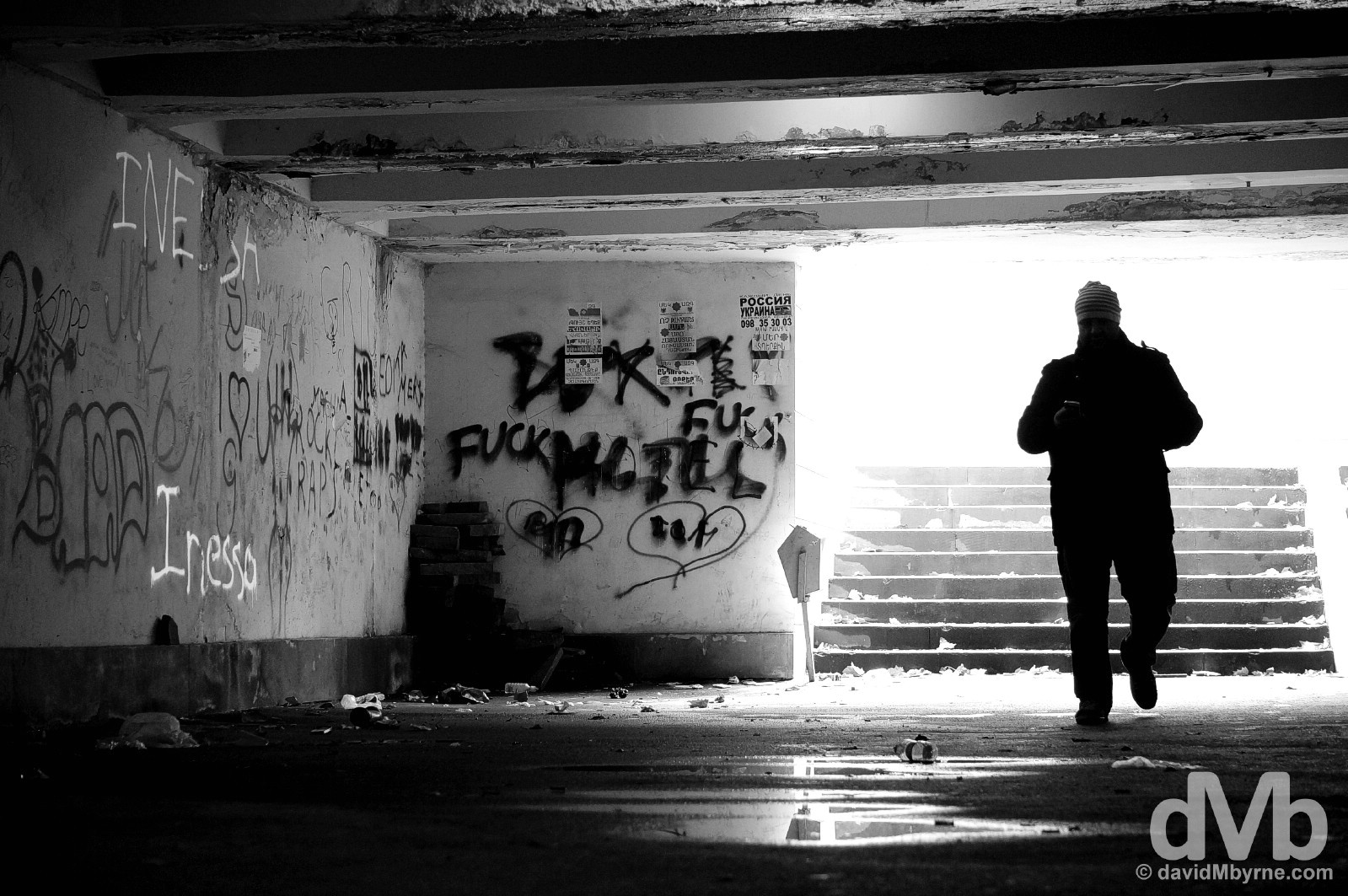 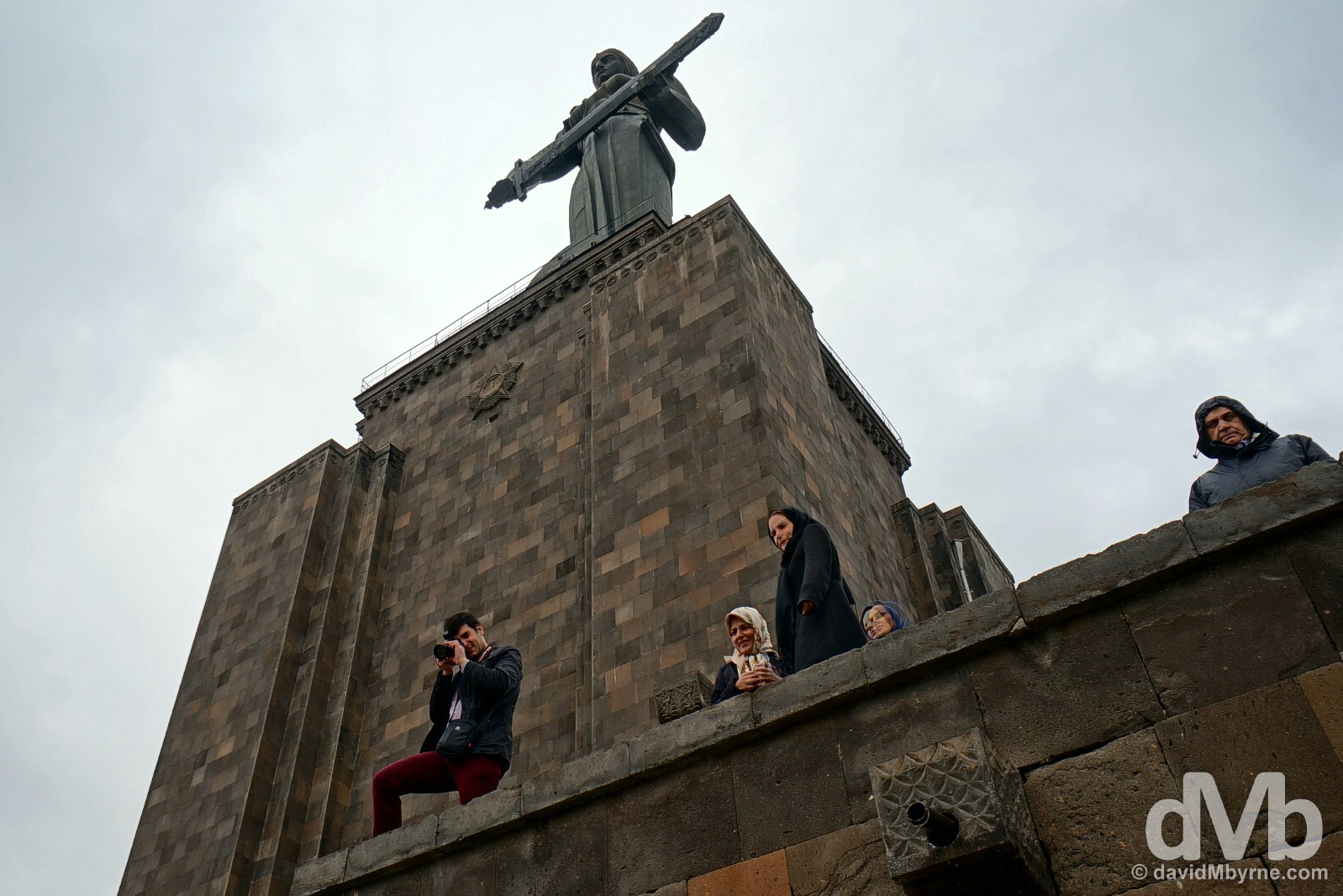 MAYR HAYASTAN || At the base of the 51-metre-high Mayr Hayastan (Mother Armenia) statue overlooking the city & visible from anywhere within it. The base of the statue, which replaced a Stalin statue in 1967, houses two museums, one detailing the Armenian contribution to World War II while the other highlights the late 80s to mid-90s ethic Karabakh War with neighbouring Azerbaijan. Out front there’s an eternal flame commemorating all who died in both conflicts. It’s one of two such flames in the city of Armenia, the other located at the the city’s Tsitsernakaberd (The Armenian Genocide Memorial & Museum). Yerevan, Armenia. March 24, 2015.

Modern-day Armenia is but a fragment of ancient Armenia, once one of the world’s oldest civilizations; for over 2-and-a-half millennia the Armenian people have been invaded and oppressed by their neighbours, notably the Ottoman Turks in the early part of the 20th century, a bleak period in the county’s history that is commemorated at Yerevan’s sombre Tsitsernakaberd (The Armenian Genocide Memorial & Museum). 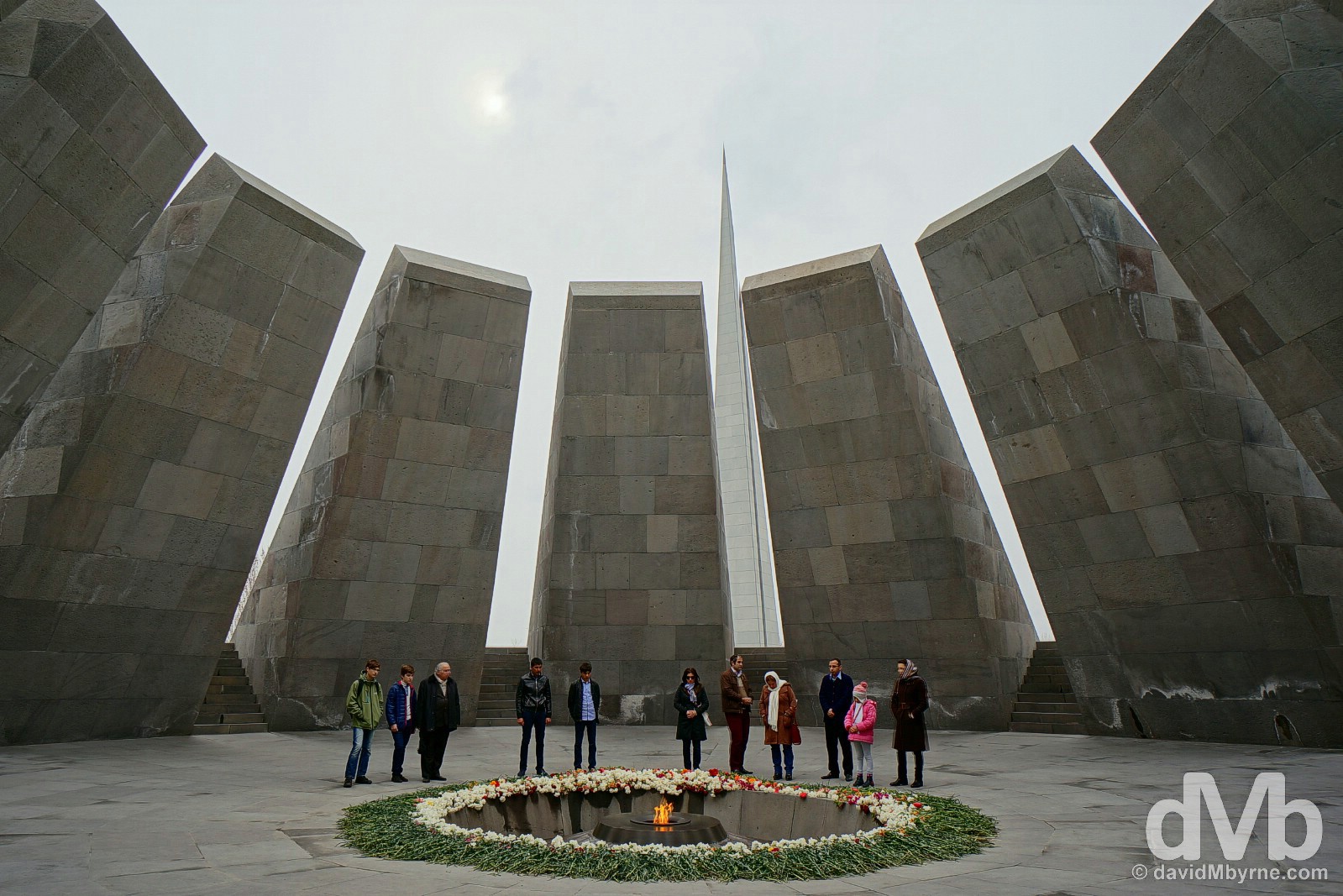 TSITSERNAKABERD/GENOCIDE MEMORIAL & MUSEUM || Yerevan’s other eternal flame can be found in the centre of its haunting Tsitsernakaberd, the Armenian Genocide Memorial & Museum. The striking memorial commemorates the some 1.5 million Armenians who perished between April 1915 & 1922 when the then Ottoman government tried to eradicate the Armenian people & their homeland. An act of genocide that the present-day Turkish government incredulously deny ever happened, this dark period of Armenia’s recent history is still an obvious bone of contention between the two countries, neighbours that don’t particularly like each other. Yerevan, Armenia. March 24, 2015. 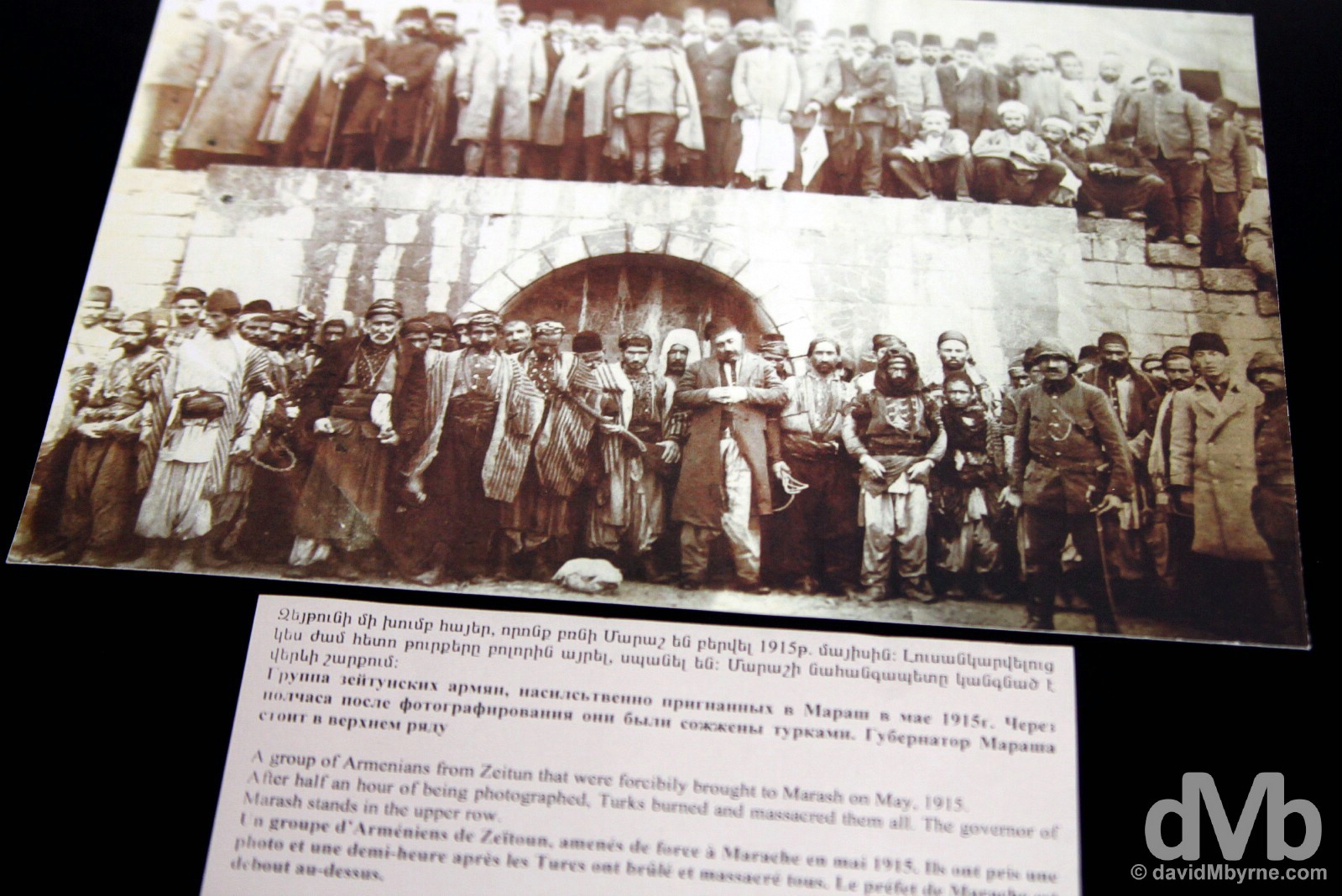 A display in the museum of the Armenian Genocide Memorial & Museum. The caption reads ‘A group of Armenians from Zeitun that were forcibly brought to Marash in May 1915. After half an hour of being photographed, Turks burned and massacred them all. The governor of Marash stands in the upper row.‘ Tsitsernakaberd / The Armenian Genocide Memorial & Museum, Yerevan, Armenia. March 24, 2015. 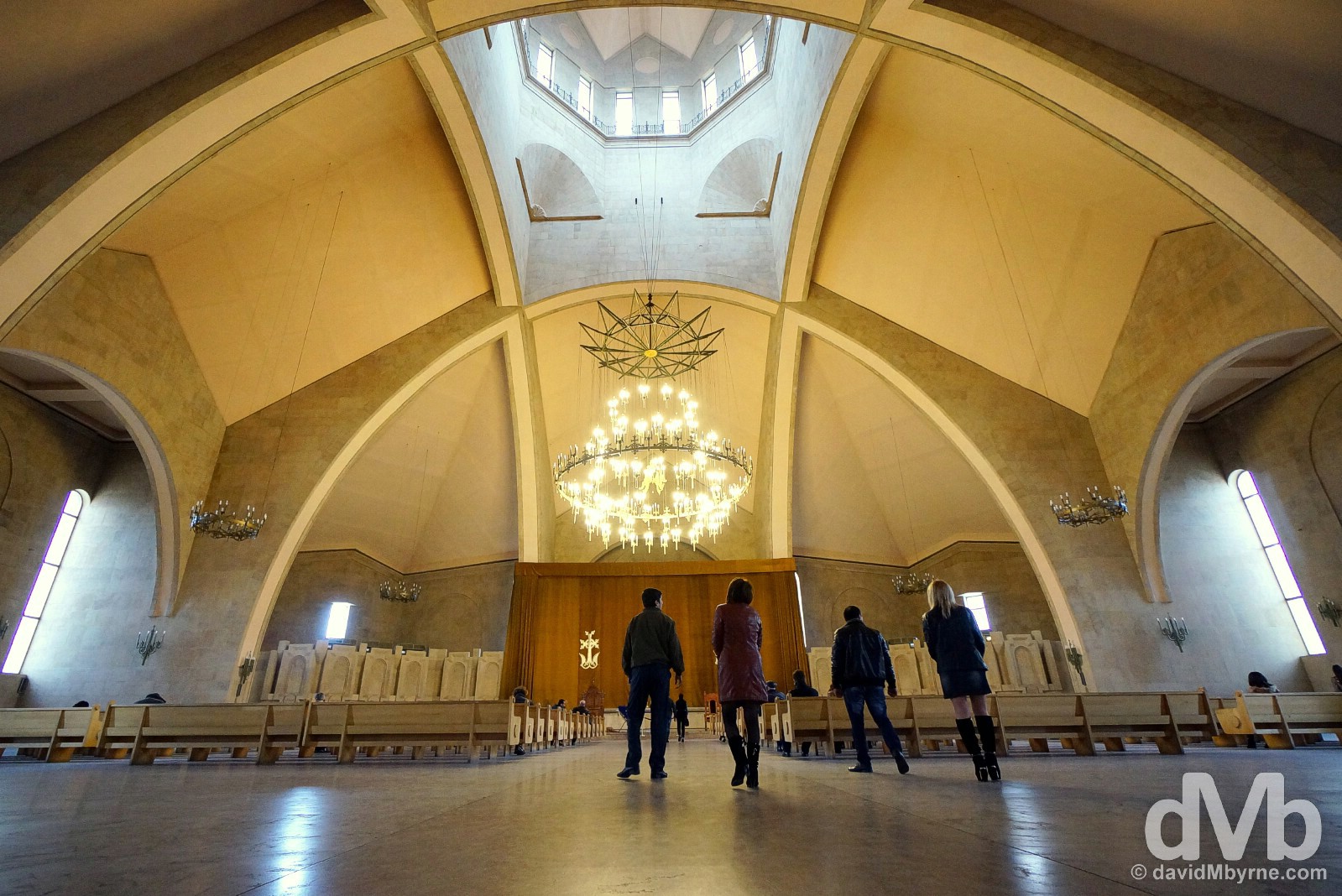 SURP GRIGOR LUSAVORICH CATHEDRAL || The interior of Surp Grigor Lusavorich Cathedral, the city’s largest church, & indeed the largest church in the Caucasus. Consecrated in 2001, it was built to celebrate 1,700 years of Christianity in the country. Needless to say the church is massive, its interior vast. I was immediately struck by the obvious differences between the interior of this church, the first I’d visited in Armenia, and the numerous church interiors I’d visited in neighbouring Georgia – whereas the interior of this church was bright & airy & boasted seating, every church I’d visited in Georgia was dark and absent of seating of any kind. Yerevan, Armenia. March 24, 2015. 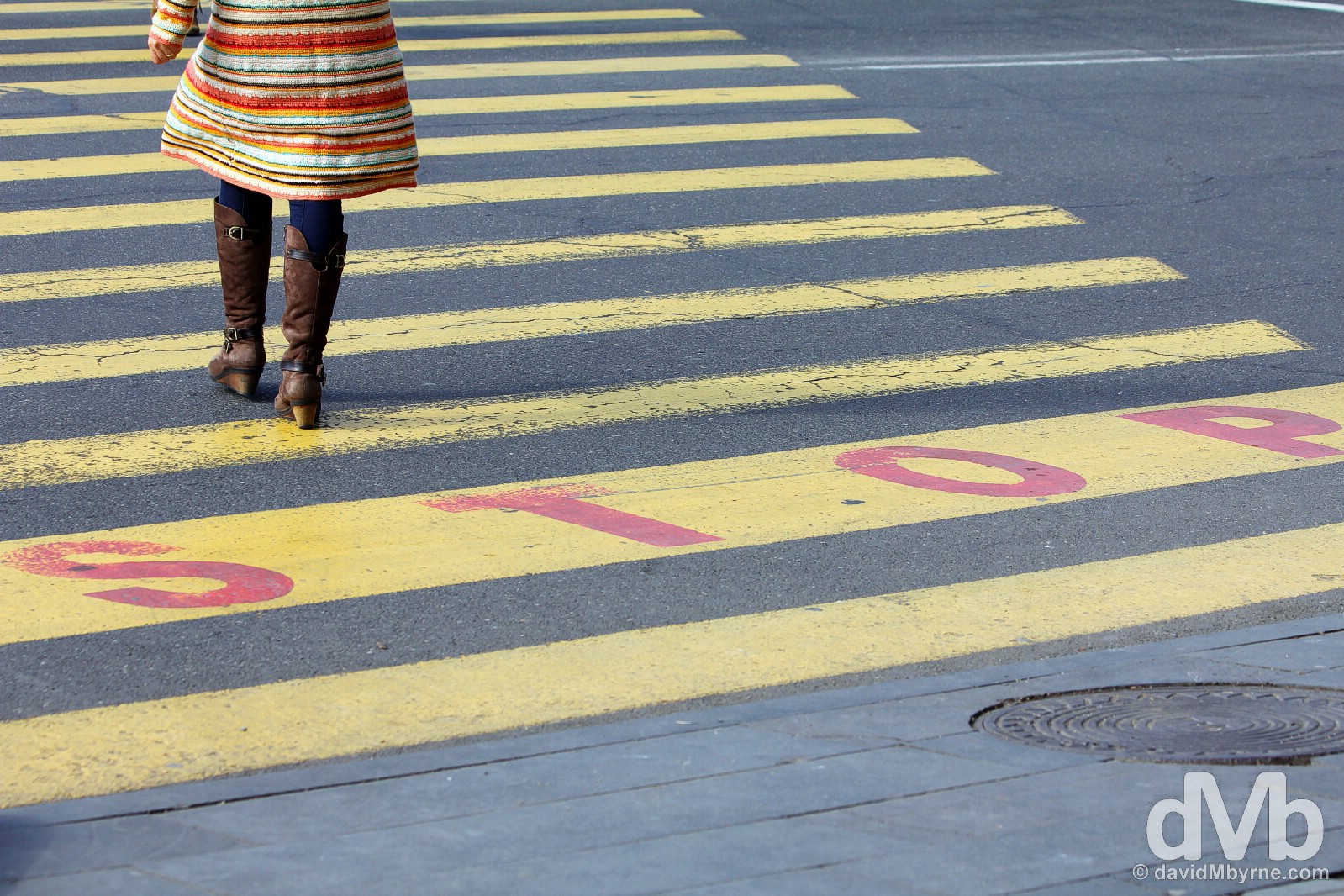 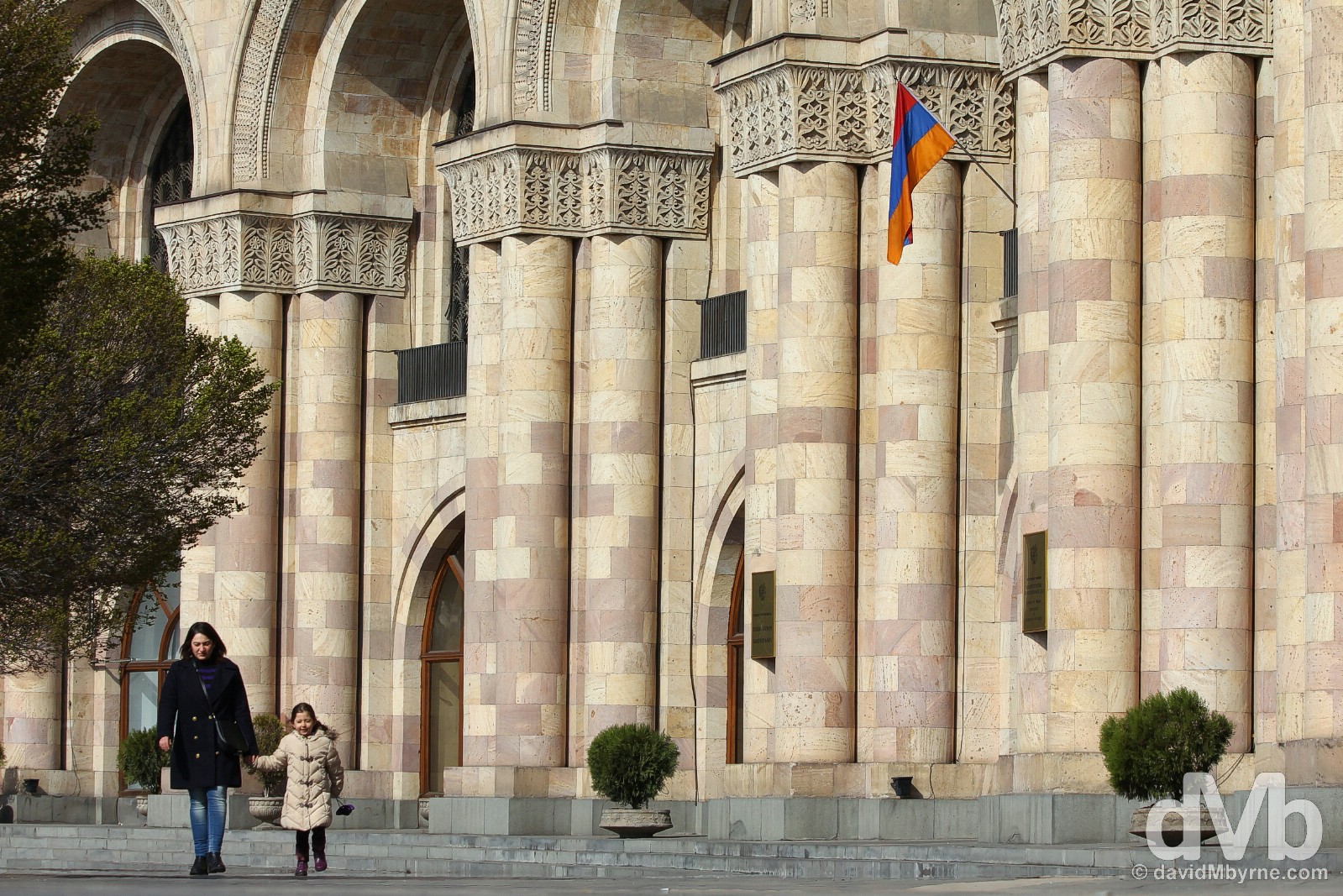 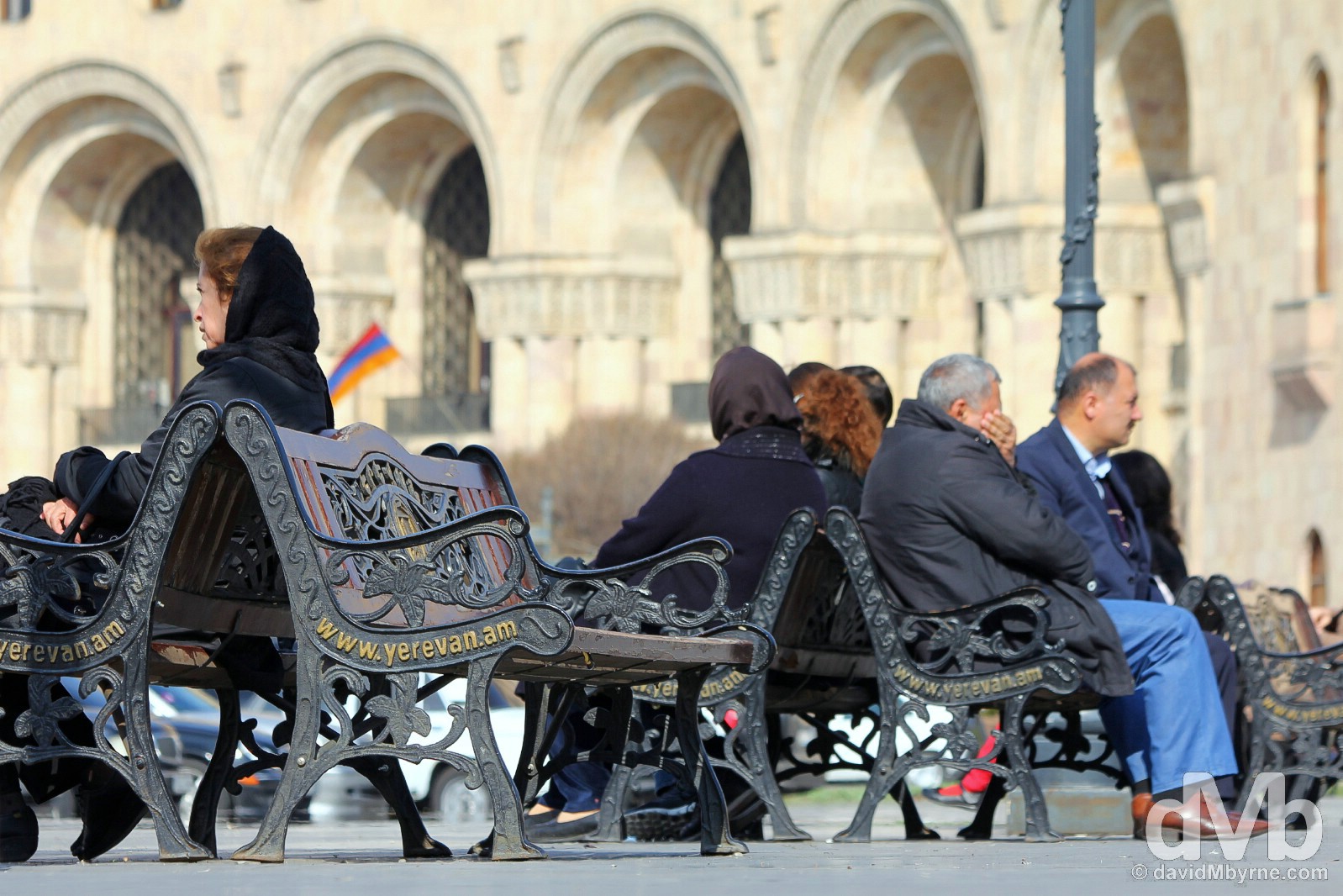 Not that one would want to of course, but it’s hard to avoid churches here in Armenia. The country adopted Christianity way back in 301 AD making it the world’s very first Christian nation. So needless to say churches (& monasteries) are dime a dozen & collectively they rank as Armenia’s premier tourist attraction. 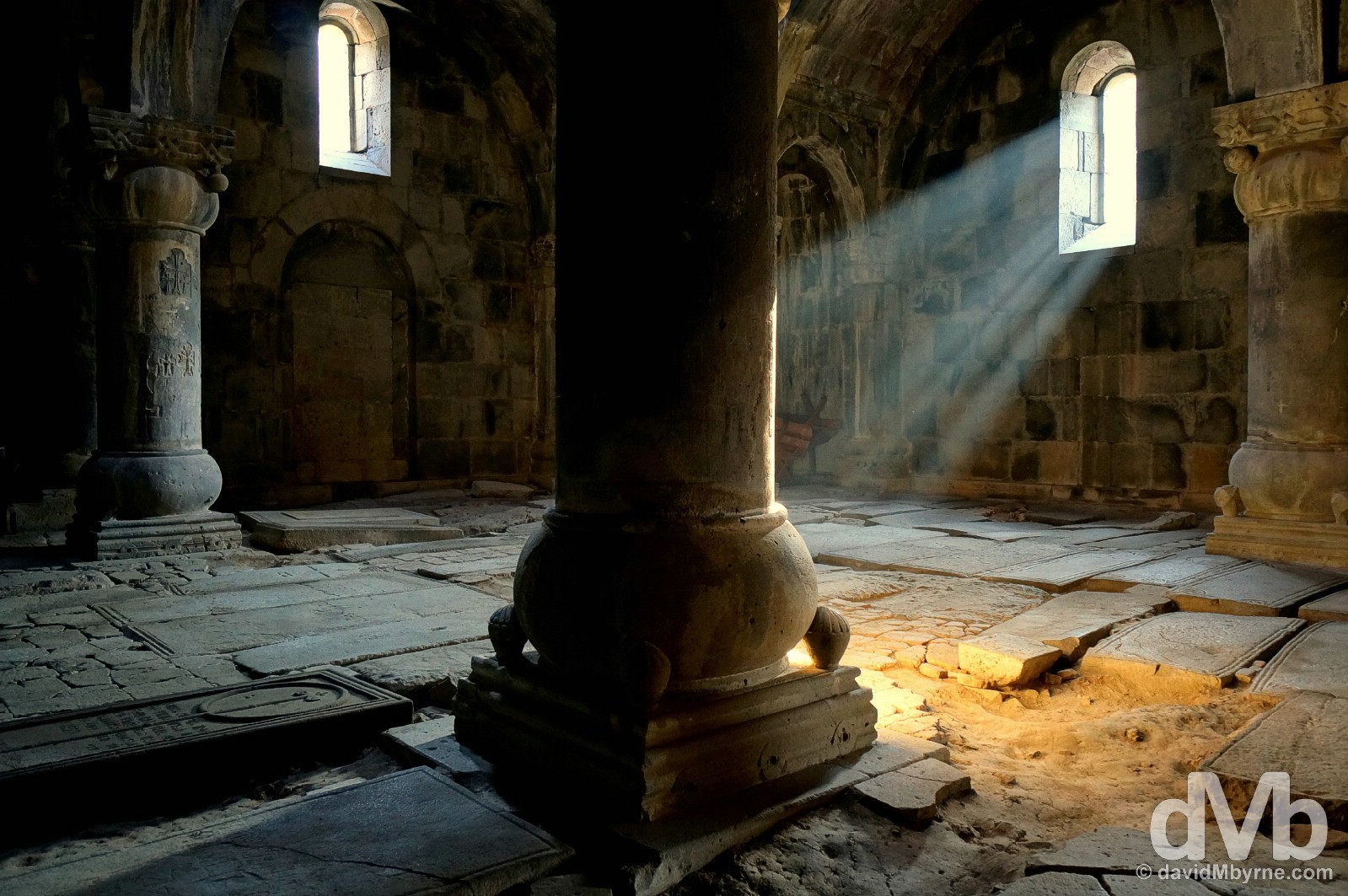 The musty interior of the UNESCO-listed Sanahin Monastery outside the town of Alaverdi in Lori, northern Armenia. March 16, 2015.

Lori’s Debed Canyon || Angkor For Churches
My time in Armenia was always going to be brief but still I couldn’t leave the country without visiting some of its medieval church & monastery complexes. Lori, one of the marz, administrative regions in the north of the country, offers these in abundance, not to mention some nice scenery. So I stopped off for a few nights en route from the capital Yerevan back to Tbilisi, Georgia. I based myself on the outskirts of the town of Alaverdi, the largest of many such villages hugging the bends of the region’s Debed Canyon. With its ugly copper mine & rows of apartment high rises, both remnants of the dark Soviet days, Alaverdi itself is a bit an eyesore. But it’s the hills – oh the hills – surrounding the town where the attractions lay, dotted as they are with ancient, atmospheric churches & monastery complexes. It’s like Angkor for churches and today I used a combination of taxis & my feet to visit three well-known monastery complexes, two of which, Haghpat & Sanahin, are UNESCO World Heritage-listed sites.

These two Byzantine monasteries in the Tumanian region from the period of prosperity during the Kiurikian dynasty (10th to 13th century) were important centres of learning. Sanahin was renowned for its school of illuminators and calligraphers. The two monastic complexes represent the highest flowering of Armenian religious architecture, whose unique style developed from a blending of elements of Byzantine ecclesiastical architecture and the traditional vernacular architecture of the Caucasian region.

UNESCO commenting on the Monasteries of Haghpat and Sanahin

Haghpat
Haghpat has architectural splendor in abundance. Its location isn’t bad either. Perched on the lip of the Debed Canyon ensured the views on offer of the surrounding landscape and of far-off snow-capped peaks were reward enough for the effort it took to ultimately get here (the gazumping shenanigans of my Alaverdi-based taxi driver ensured I had to walk 5 kilometres to reach Haghpat, and a further 12 kilometres from here to reach Sanahin). 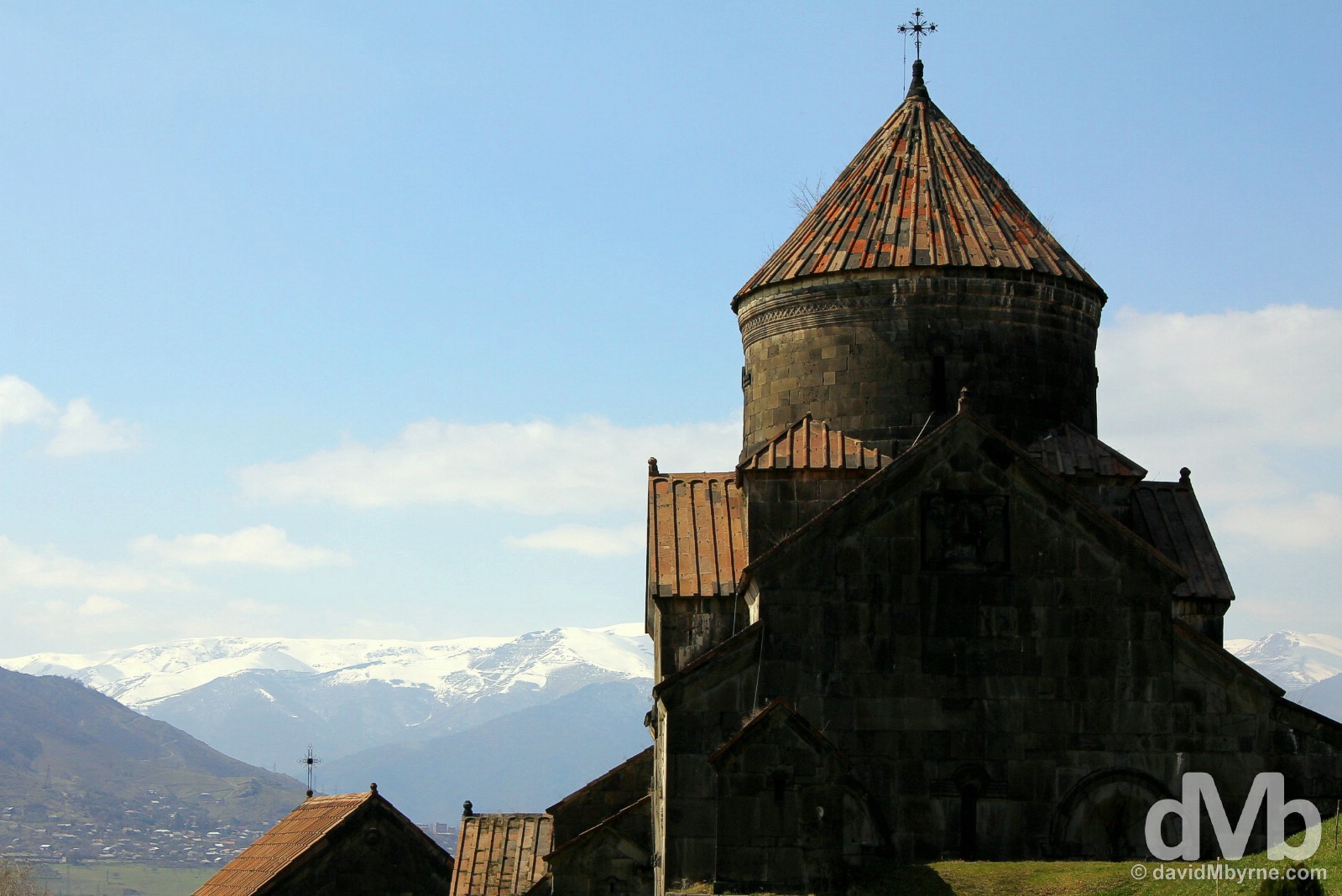 HAGHPAT || Aside from the ruins and historical importance of Armenia, the land is a mountainous region of beauty that stretches on for miles, something very evident when standing in the grounds of the Haghpat Monastery. Lori, Armenia. March 26, 2015.

Founded around 976, Haghpat’s golden period of construction was the 12th century when it was a a bustling centre of learning. Added to the UNESCO World Heritage list in 2000, Haghpat’s location coupled with its ensemble of churches, a bell tower, a refectory, a book depository, and over 80 khachkars (an Armenian cross-stone that was a characteristic of Medieval Christian Armenian art, a carved memorial stele bearing a cross and often decorated with additional motifs) meant this was my favourite location of the day. With the complex all to myself, I spent quite a bit of time here poking around. 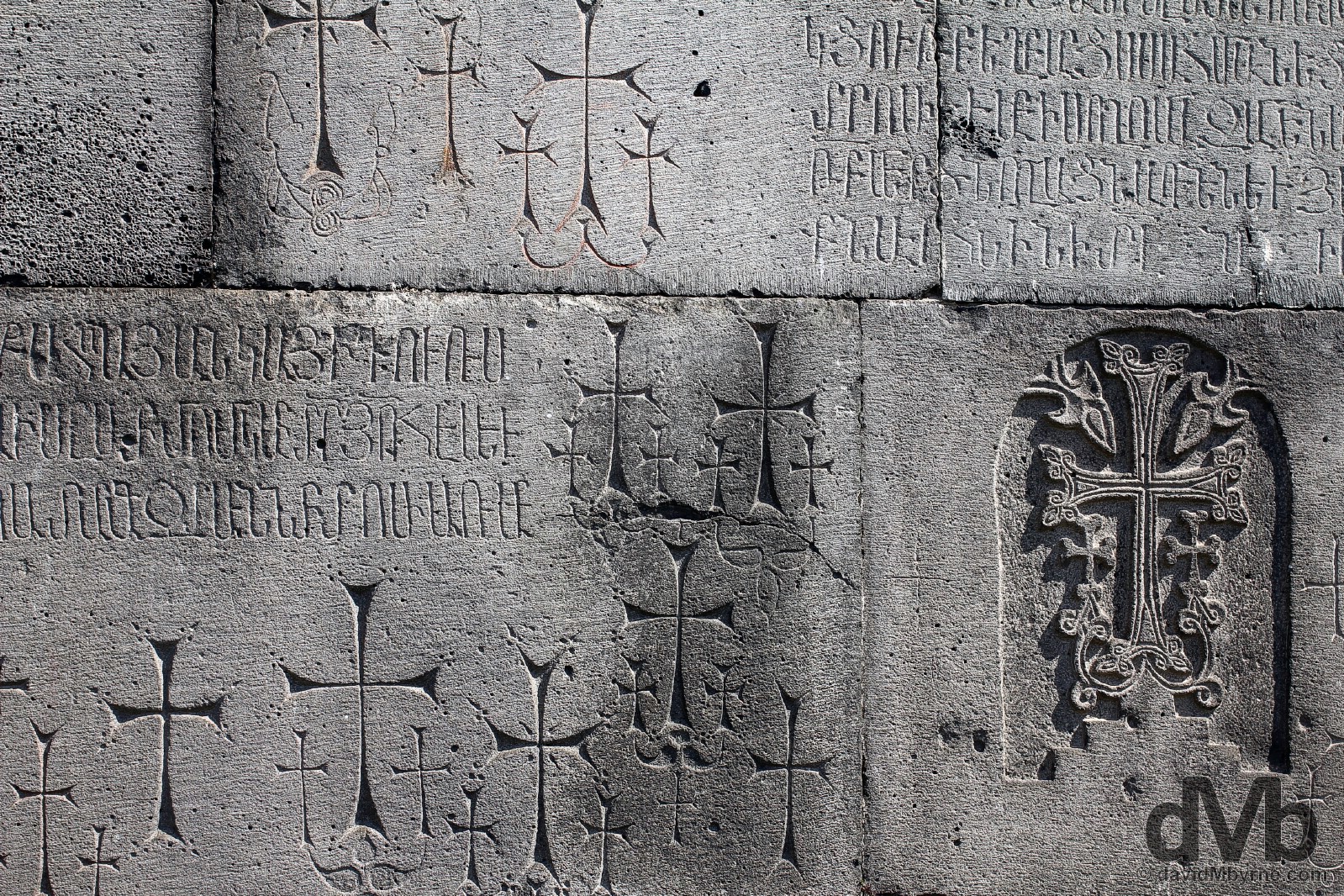 Carvings, including a khachkar, bottom right, on the walls of the UNESCO-listed Haghpat Monastery in Lori, northern Armenia. March 26, 2015.

Sanahin
A 2 hour, 12-kilometre hike from Haghpat brought me to the crumbling, dusty, dark, eery, moss-covered & grave-infested Sanahin Monastery. Again finding it deserted and having it all to myself, this would have been the perfect place for me to play out all those ghoulish Halloween fantasies I never had. 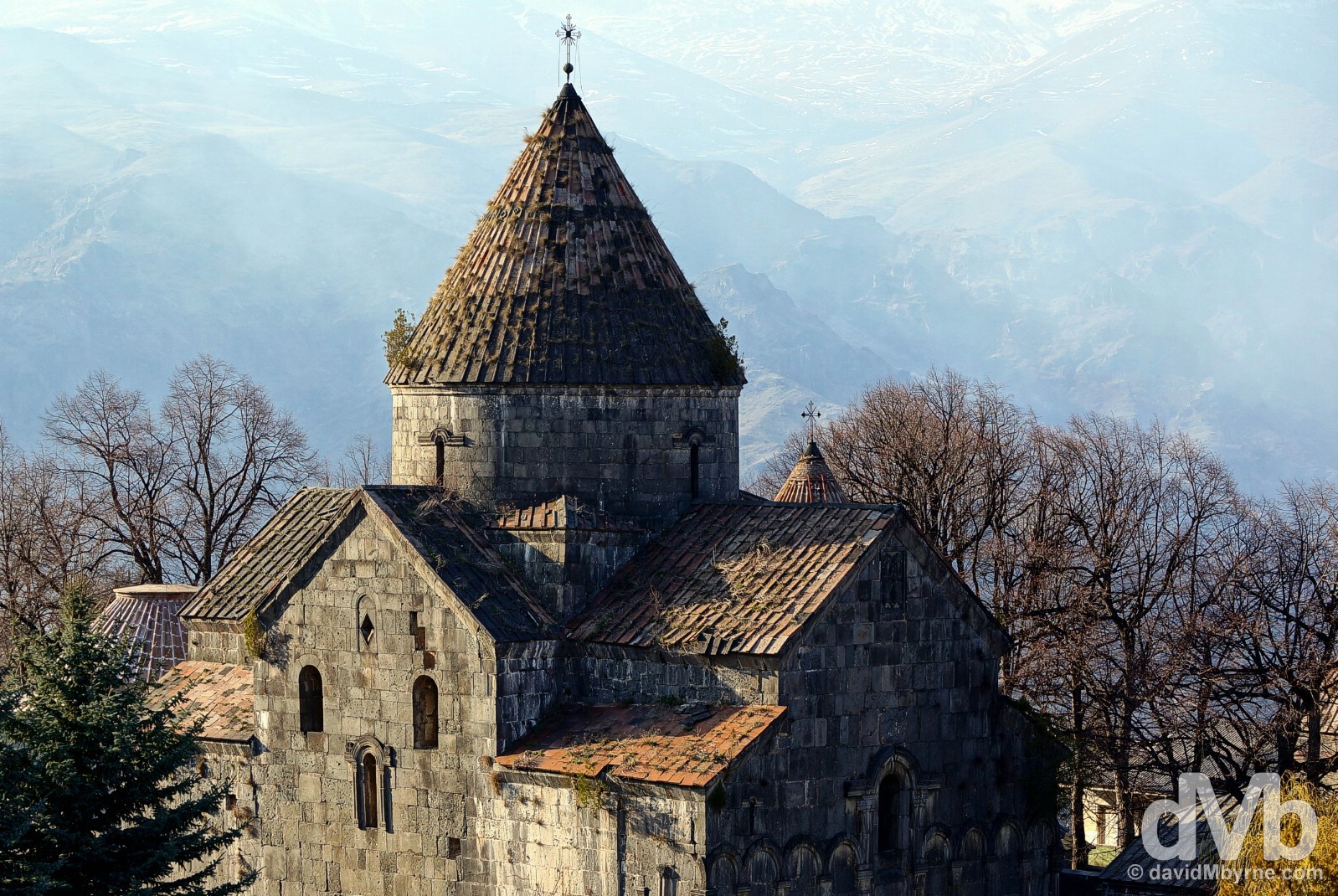 Sanahin means ‘older than that one’, a reference to its younger cousin Haghpat. Just like Haghpat, the 10th – 13th century monastery has a prime location perched above the lip of the Debed Canyon high over Alaverdi. This was another monastery complex that was once an important learning centre – a library was created here in 1062 & a medical school flourished here in the 12th century. Of all the Debed Canyon monastery complexes, Sanahin was the first of Armenia’s monasteries to attain World Hertiage status when it was officially recognised by UNESCO in 1996, 4 years before Haghpat.

Akhtala
The other monastery complex I visited, & the first I visited on this day, was the 13th-century Akhtala Monastery some 25 kilometres from Alaverdi (I visited here while still having cordial relations with my taxi driver). While Akhtala may not boast UNESCO status/protection, it has something both Haghpat & Sanahin do not – stunning frescoes, the big attractions of this particular monastery. 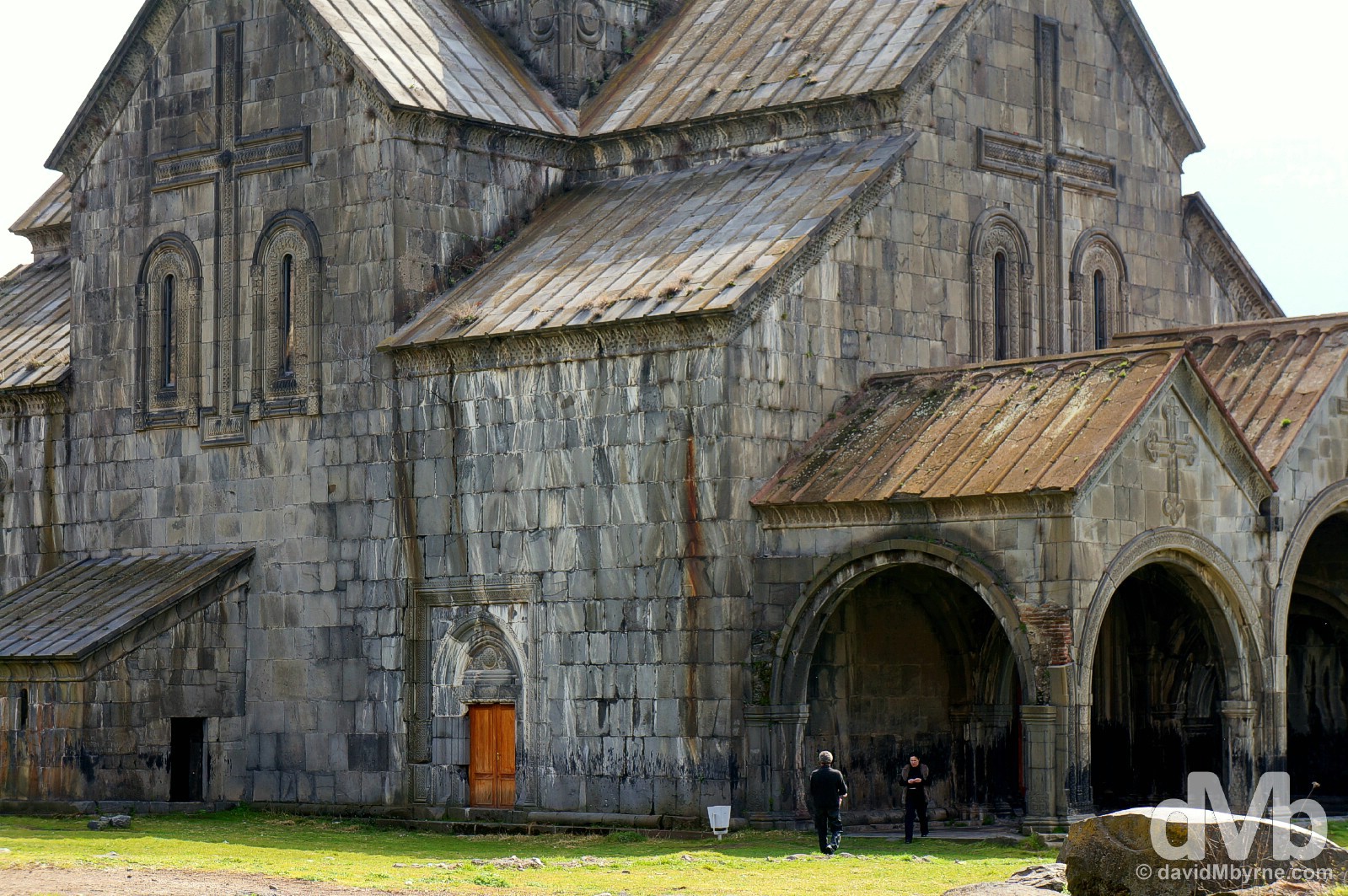 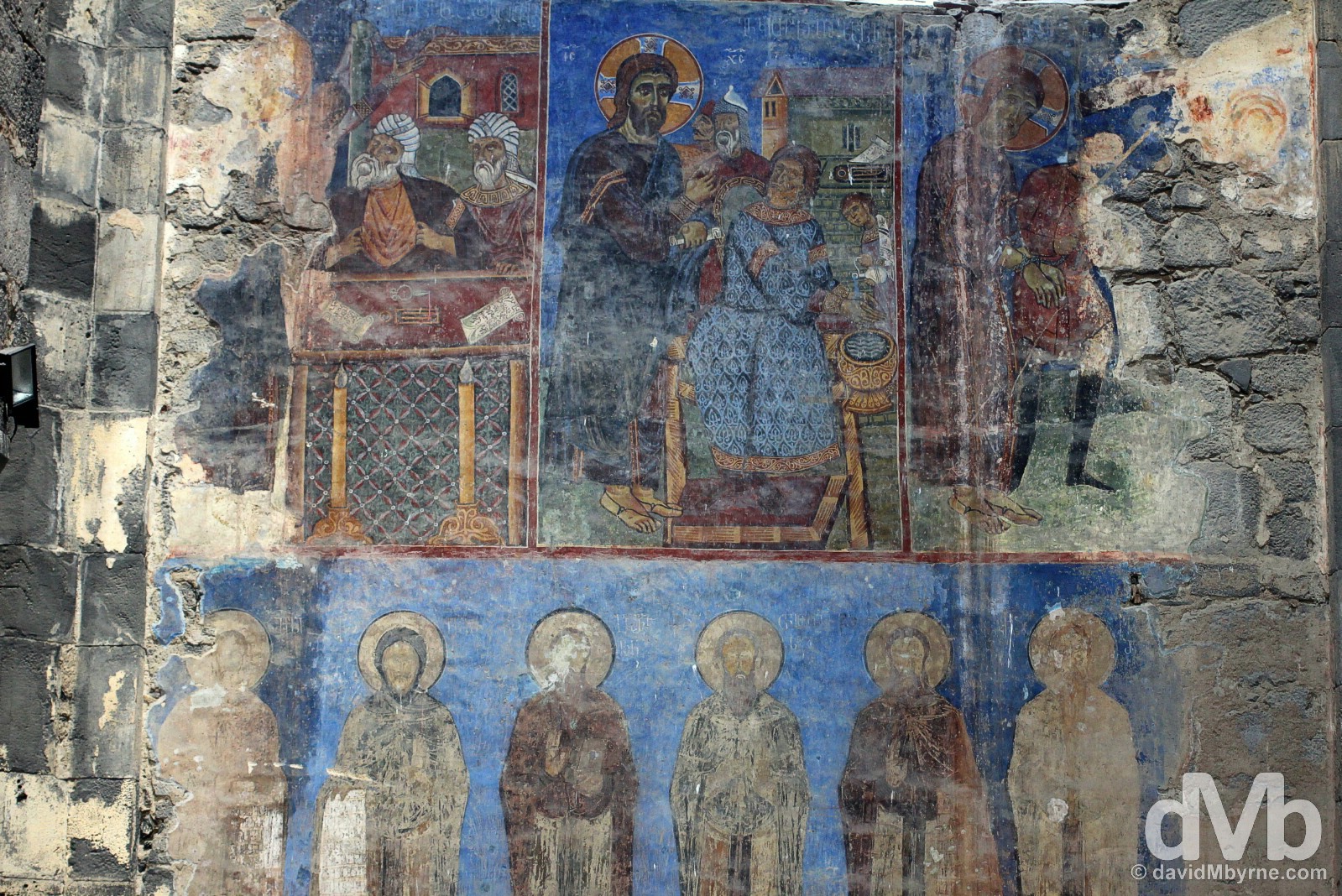 Frescoes adorning the walls of the Akhtala Monastery in Lori, northern Armenia. March 26, 2015.