”… pick your island of choice. Better still, pick a few. Check the ferry schedule and set sail. Settle into a quaint room. Wander among whitewashed lanes. Wash down your souvlaki with a beer or a carafe of wine in a local taverna. And when all that is done you can hop to the next island and do it all over again. C’est la belle vie Greek style, one sun-drenched island at a time.”

Greek island hopping. Where to go? When? And how to get there? With an astonishing 6,000 islands and islets scattered among the shimmering Aegean and Ionian Seas, the fact that only some 220 of them are inhabited doesn’t help much with the where-to-go-when-and-how first world conundrum invariably tackled by many a Greek island-hopper. Yes, you could fly. But where’s the fun in that? And why rush? Island-hopping via ferry is an unrushed and integral part of the Greek escape, one not to be missed. 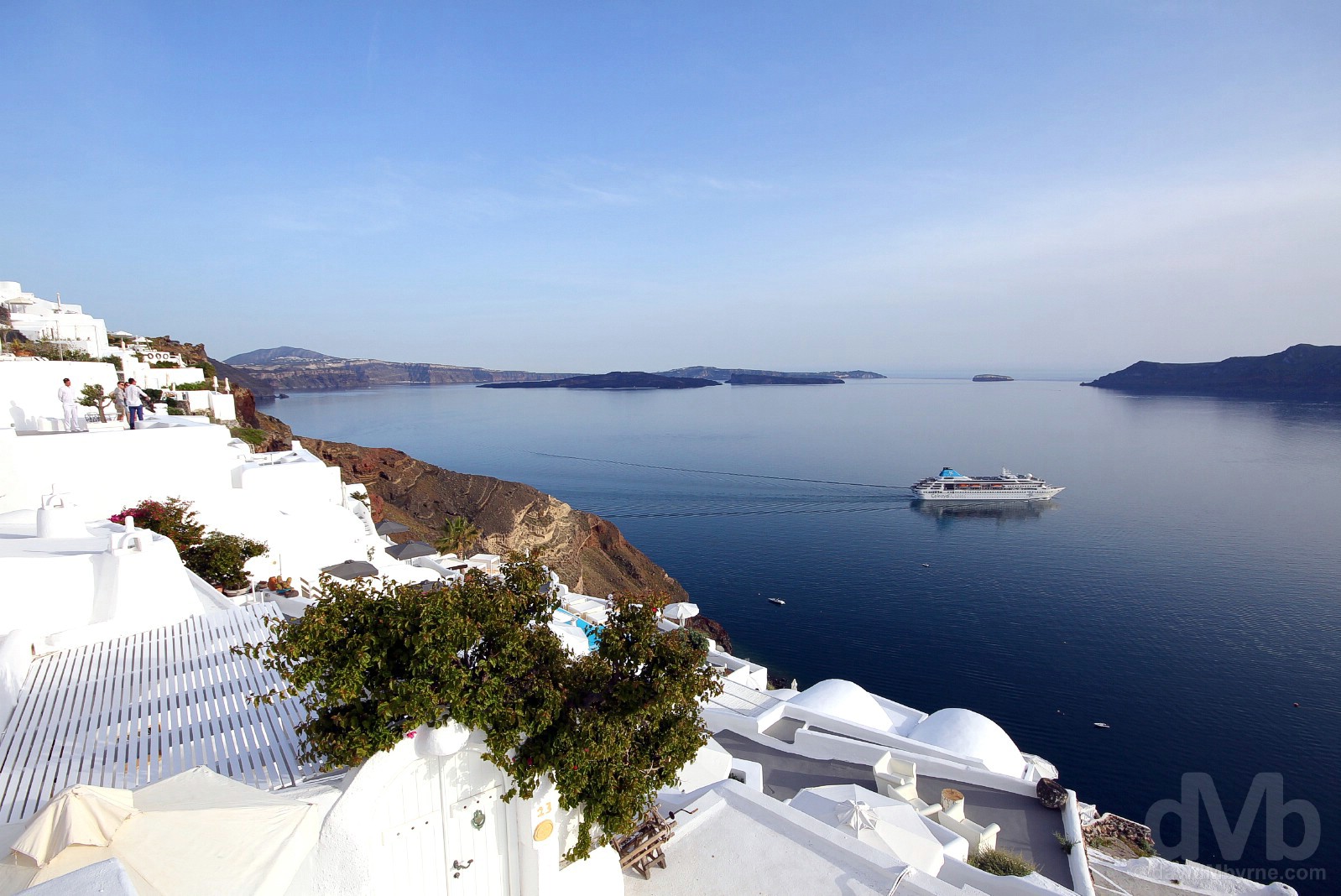 Islands In The Sun
The southeastern Dodecanese islands of Kos and Rhodes are popular, as are the western Ionian Islands of Corfu and Kefalonia. But it’s the Aegean Sea’s Cyclades archipelago, offering Greece’s best and most convenient island-hopping, thats draws the largest flotillas. Named for the circle they form around the sacred island of Delos, the Cyclades comprise of over 200 islands in total scattered like jewels across the azure Aegean Sea between the Greek mainland and Crete. The majority are small and uninhabited with about 20-plus main islands each with their own distinct character. Some are household names with crowds to match. Some are still relatively unheard-of escapes. 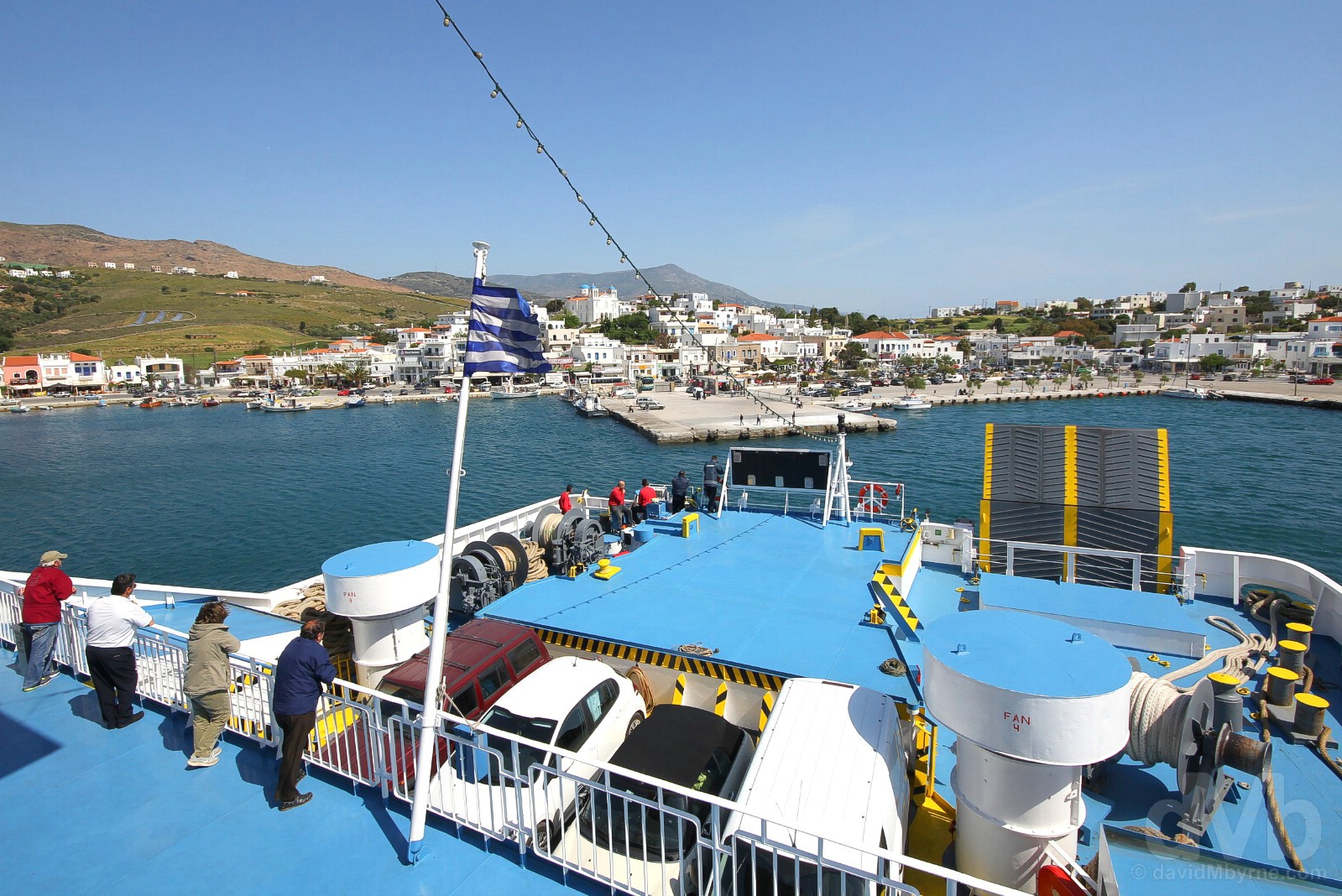 Stopping off at Gavrio port on Ándros, the second-largest and northernmost island of the Cyclades archipelago, en route from Mýkonos to Rafina Port, Greece. May 3, 2017.

All but two of the Cyclades are rugged peaks of submerged mountains (the exceptions being the volcanic islands of Santoríni and Mílos), and all but Náxos, the group’s largest island, are arid and barren where very little grows. Renowned for their laid-back lifestyle and brilliant-white, picture-perfect cubist architecture, blue-domed churches, and whitewashed Old Town passageways of chic boutiques, artisan jewellery stores, trendy galleries, cafes, bars and restaurants, the Cyclades offer history, partying, culture, hiking, romance, and once-in-a-lifetime escapes, although rarely all on the same island. Research is key, selectivity generally a must. 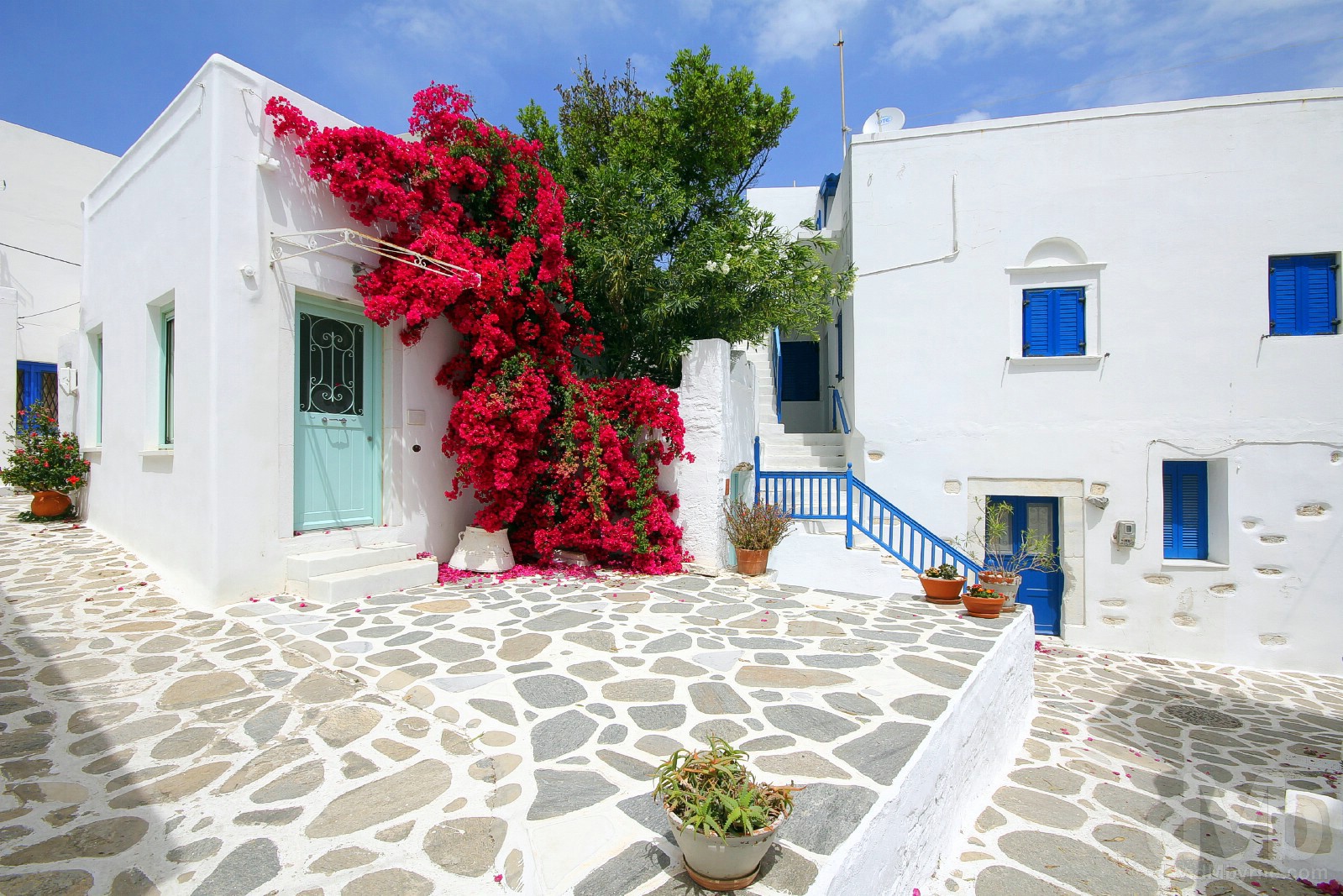 Whitewashed ‘sugar’ house cubist architecture adorned with characteristic blue, complementing pastels, and brilliant bougainvillea reveal themselves around many a corner in a twisting narrow maze of laneways paved with whitewash-outlined flagstones. Prototypical Cyclades and oh-so pretty. Parikiá, the bayside capital of Páros, Cyclades.

So, pick your island of choice. Better still, pick a few. Check the ferry schedule and set sail. Settle into a quaint room. Wander among whitewashed lanes. Wash down your souvlaki with a beer or a carafe of wine in a local taverna. And when all that is done you can hop to the next island and do it all over again. C’est la belle vie Greek style, one sun-drenched island at a time. 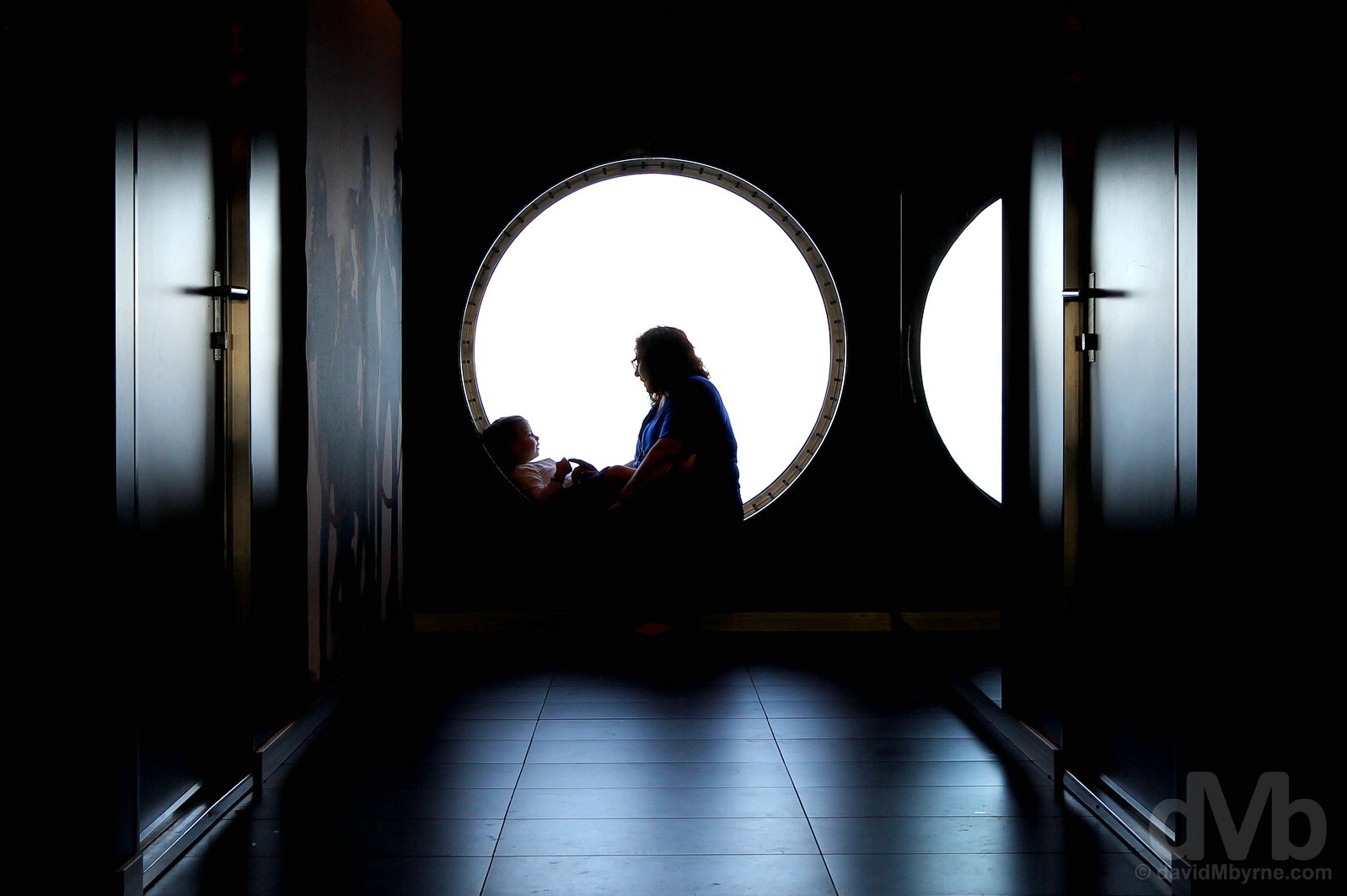 Porthole patter on the Zákynthos to Kyllini ferry. Ionian Sea, Greece. May 6, 2017.

Sail with me as I hop between six Greek islands, five in the Cyclades – Santoríni, Páros, Mýkonos, Delos and Tínos – with one Ionian island, Zákynthos/Zante, tacked on for good measure.

”… a somewhat exclusive destination of unparalleled global appeal, a place-to-see-before-you-die location par excellence. Oozing romance and voguish in the extreme, its world-famous vistas, architecture, and cave house infinity pools have graced the pages of nearly every glossy travel or lifestyle magazine ever printed and formed the backdrop for many a bikini-clad fashion model shoot, (staged) social media influencer selfie, or dreamy wanderlust-inspiring GoPro video footage.”

”Páros… was all the more charming for what it wasn’t – it wasn’t busy, it wasn’t expensive, and it wasn’t as ostentatious as elsewhere. But it was still sufficiently Cyclades-esque swank and downright seductive, almost coquettishly so. And pretty. Oh-so pretty.”

”It’s not the exclusive celeb and jet set hangout it used to be in the 50s and 60s… but fabulous gay-friendly Mýkonos is still the Cyclades glamour capital, not to mention its party central.”

”… one of the holiest sanctuaries in Greek mythology, the island is the mythical birthplace of the gods Apollo and his twin sister Artemis. Today, the fascinating archaeological site on the island, one of the most important collections of ancient Greek ruins on earth, preserves the remains of a sanctuary to Apollo and Artemis and the once-magnificent city… that developed around it.”

Image || Supervisor at the Terrace of the Lions of the archaeological site Ancient Delos. May 2, 2017.

”There is more to the Cycladic island of Tínos than the all-encompassing holiness associated with its venerated Church of Virgin Mary/Panagia Evangelistria and its miracle-working icon. But the hulking form of Greece’s major Marian shrine is the only reason I paid the island a visit from nearby Mýkonos meaning Tínos may be as adept at drawing tourists as it is pilgrims.”

”A now-iconic image… the MV Panagiotis… blown off course during adverse weather in October 1980… sitting pretty here ever since in the middle of a secluded white-sand beach and surrounded by towering white limestone cliffs… it is beyond dazzling, easily one of the most picture-perfect scenes I’ve ever pointed a (zoom) lens at.”

Image || The rusting MV Panagiotis in Navago/Shipwreck Bay, Zákynthos. May 5, 2017.