“Lost in legend, the statue’s origins are muddy. Some say he’s modelled on a boy who extinguished fires (small ones, no doubt) but the truth, I’m guessing, is probably a little more believable.”

Poor Belgium doesn’t get a very good rap. It has a reputation as being dull & dour. Boring even. I’m not sure why. It boastS an array of amazing medieval old towns & Flemish Renaissance architecture. For food, it has the best chocolate, waffles & beer in the world. It’s tolerant; it’s small; & it’s easy & economical to get around. All of this, and more, holds true for the underappreciated Belgian capital of Brussels. 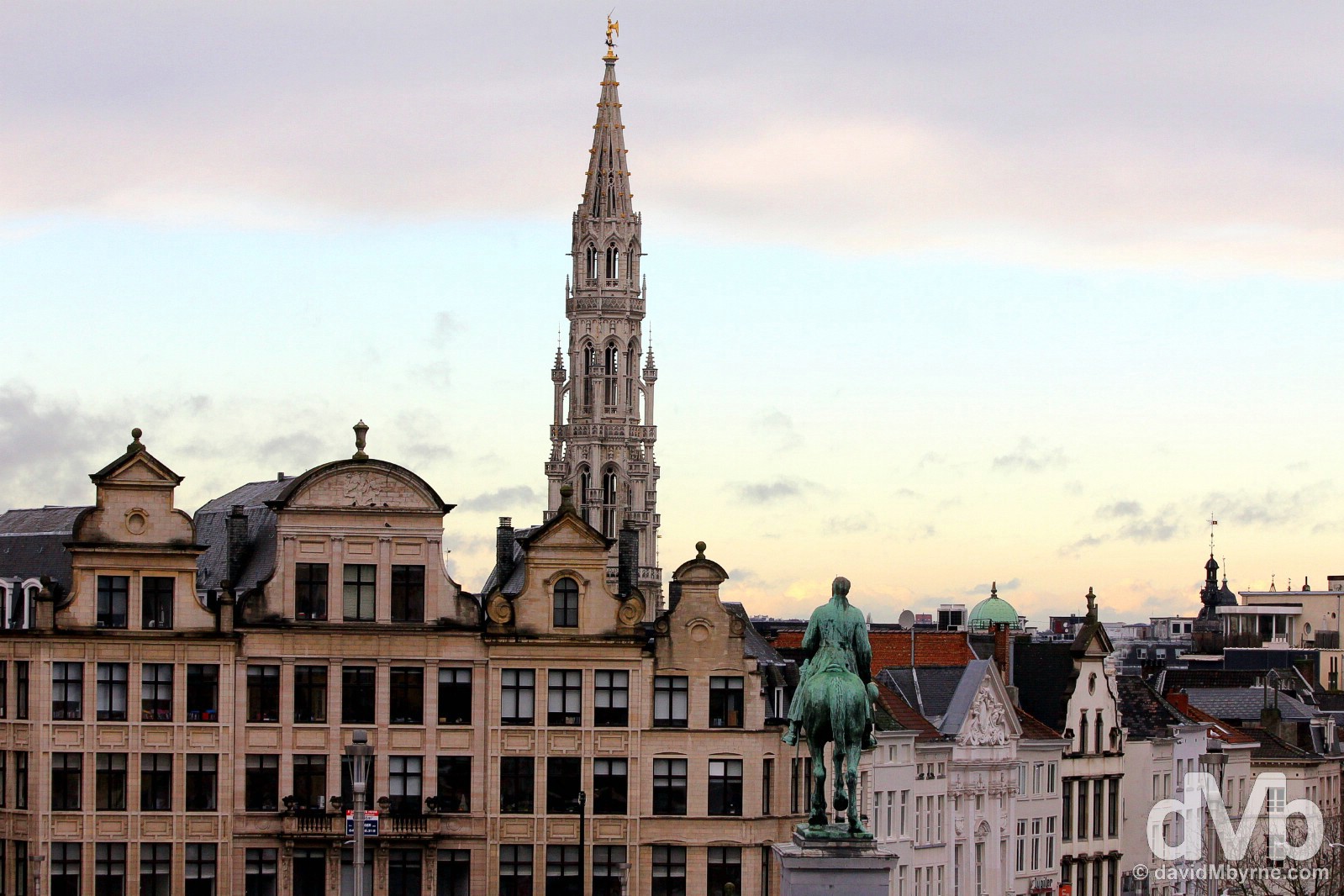 Kunstberg/Mont des Arts, Brussels, Belgium. January 14, 2016 || A center for fashion, art and Belgian culture, Brussels is big, beautiful, multilingual, tolerant, artsy & eminently explorable boasting as it does a certain small town charm. This is a picture overlooking the city’s central Kunstberg, or Mont des Arts (Hill of the Arts). Built in 1965 & presided over by a mounted statue of King Albert I, it’s an historic geometric garden with a 9-jet fountain & and open-air elevated stairway which affords one of the finest views of the city. In the distance is the iconic 96-metre-high spire – topped by a golden statue of Saint Michael, the city’s patron saint, slaying a demon – of the city’s Gothic Town Hall (Hotel de Ville in French, Stadhuis in Dutch). It’s located in the city’s UNESCO-listed Grand Place, the historic medieval centre of Brussels.

I’ve been to Brussels before. Indeed, I’ve even worked here in the past, albeit only for a few days and so long ago (it was in 1999) that I scarcely remember anything about the city. I spend the best part of two days in the city on this latest visit. Prior to arrival, I had earmarked areas of the city for exploration; I hadn’t time to see it all. Belgium may be one of the smallest countries in Europe but its misunderstood capital is a bit of a spread-out beast. And make no mistake, it’s not a boring spread-out beast either.

The UNESCO-listed square in the historic centre of Brussels, Grand Place (Grote Markt in Dutch) is a 68 metre by 110 metre cobbled rectangular medieval market square surround by opulent guildhalls and jaw-dropping edifices. It was my first port of call on this return visit to Brussels. 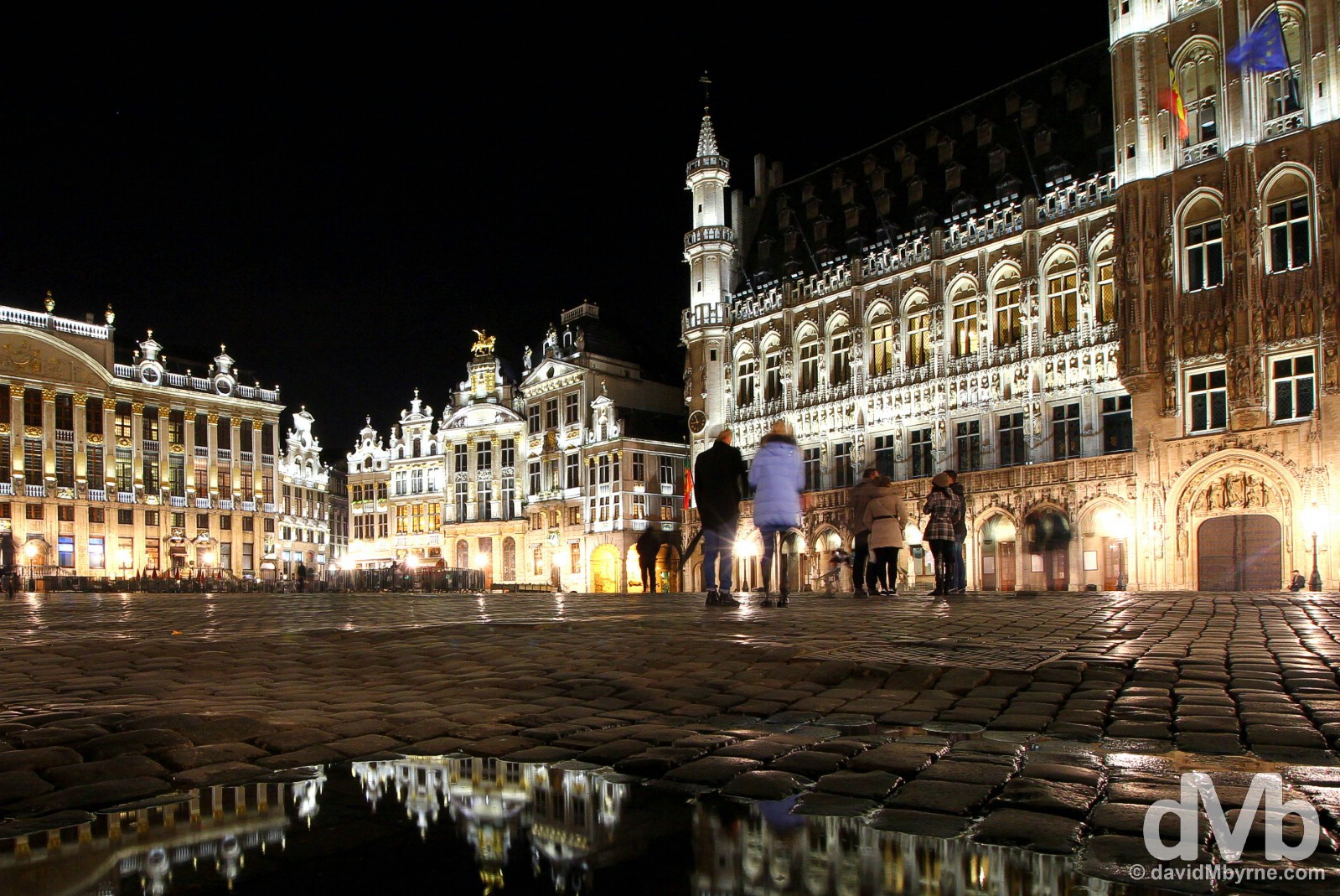 Grand Place/Grote Markt, the cobbled historic centre of medieval Lower Town in Brussels, Belgium. January 13, 2016 || There are beautiful, delicately carved baroque guildhalls in many Belgian towns – I guess it’s all part of the boring-busting charm – but none quite reaches the heights of those in Brussels’ Grand Place/Grote Markt, one of Europe’s finest urban squares. First laid out in the 12th century, Grand Place was to grow to reflect the booming city which was a centre of European cloth trade in medieval times. Back then the square was the hub of commercial, political & civic life in the city & most of the lavish buildings overlooking the cobbled square were built by wealthy merchant guilds as headquarters for their enterprises – guildhalls. Largely destroyed by bombing in 1695, the buildings standing today are 17th century replacements of the original constructions. || First posted from the road in the January 2016 entry Belgium – An Exploration of Belgium’s Big Four of Brussels, Ghent, Bruges & Antwerp. ||

La Grand-Place in Brussels is a remarkably homogeneous body of public and private buildings, dating mainly from the late 17th century. The architecture provides a vivid illustration of the level of social and cultural life of the period in this important political and commercial centre. 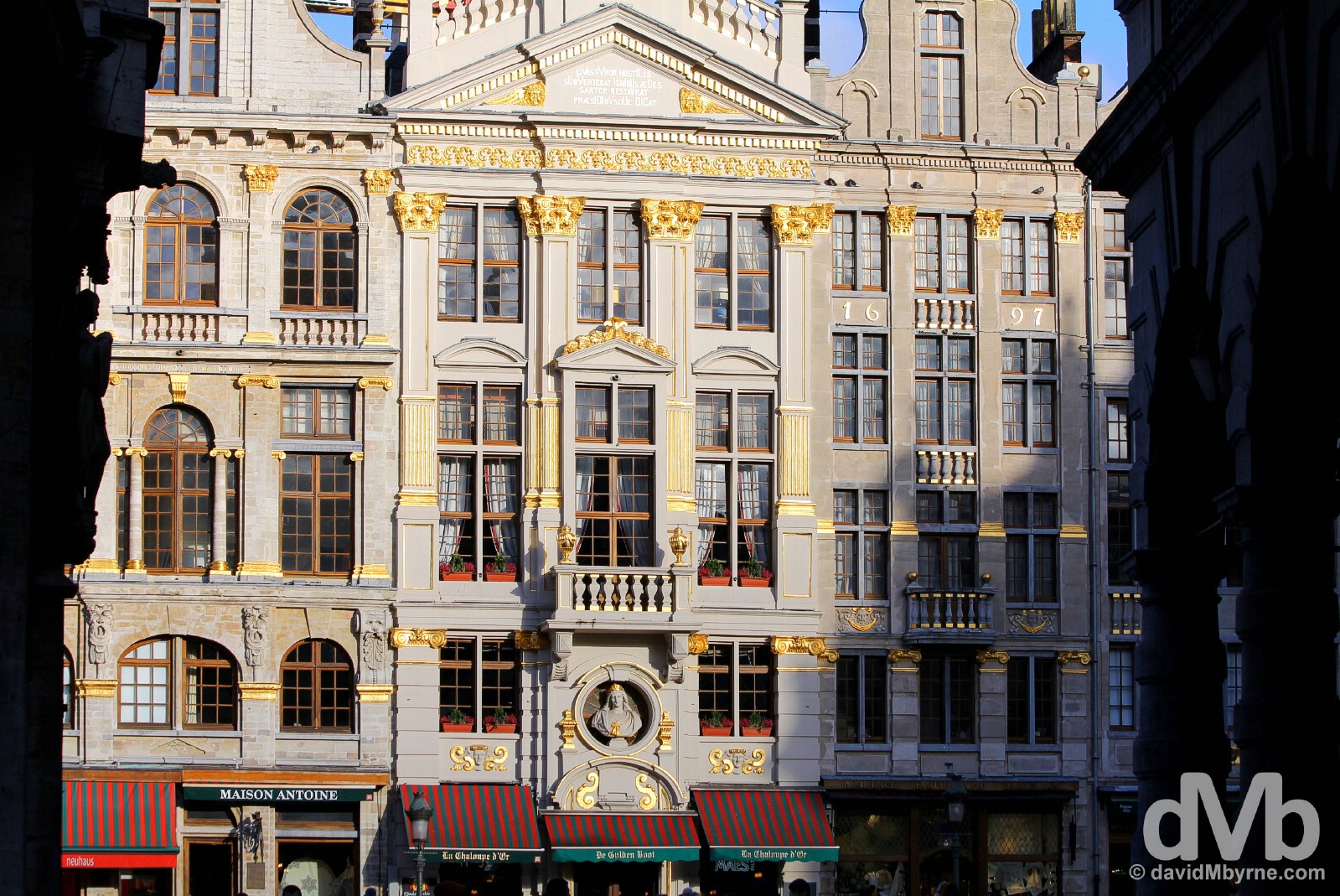 Illuminated guildhall facades in Grand Place/Grote Markt as seen from one of the narrow side alleys providing access to the square. Brussels, Belgium. January 14, 2016. 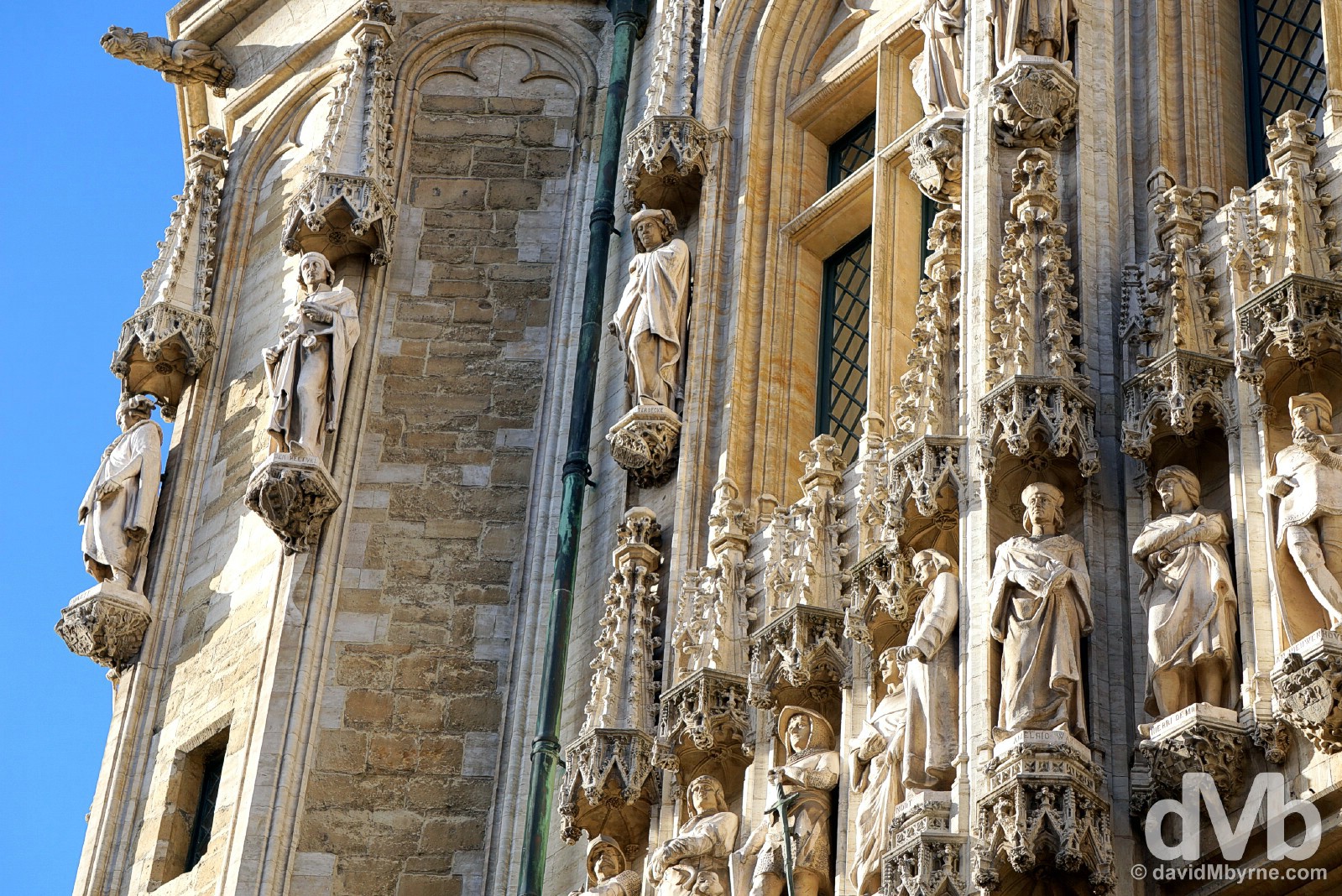 Detail on Hotel de Ville (Town Hall) in Grand Place, Brussels, Belgium. January 14, 2016 || The Grand Place’s most famous edifice is undoubtedly the Gothic showstopper that is the Town Hall (Hotel de Ville in French, Stadhuis in Dutch). Built on the south side of the square in stages between 1401 and 1455, its construction made the Grand Place the seat of municipal power. It was the only building on the Grand Place to survive the bombing of 1695, ironic considering it was the target. With its piercing 96-metre-high spire, the Town Hall is probably the finest building in a city of fine buildings, the highlight of which for me was the astonishing facade decorated with numerous statues representing nobles, saints and allegorical figures. These statues, here illuminated brilliantly by the afternoon sun, are reproductions, the older ones now safe in the Brussels City Museum housed in the King’s House, another astonishing Grand Place edifice directly across from the Town Hall. 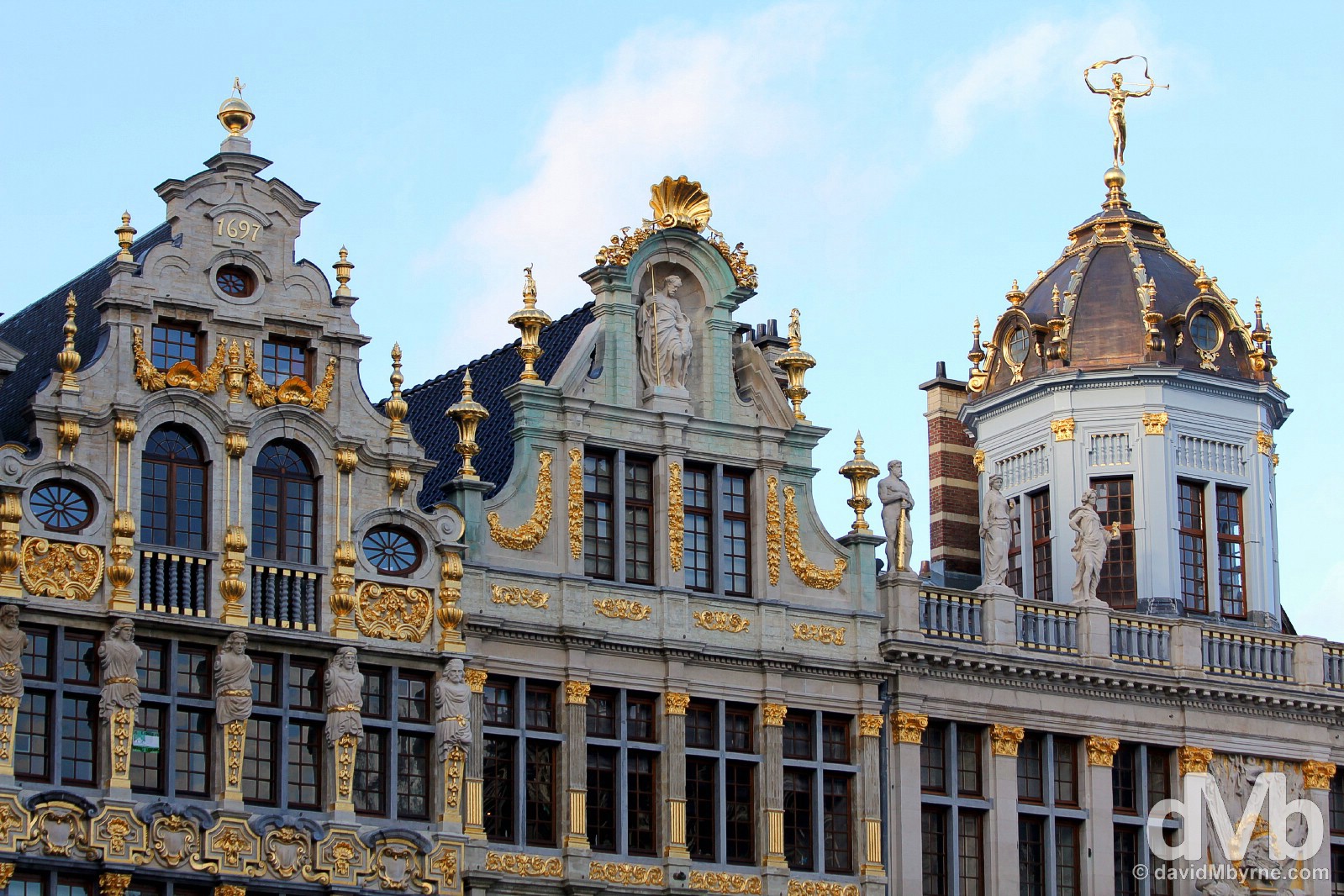 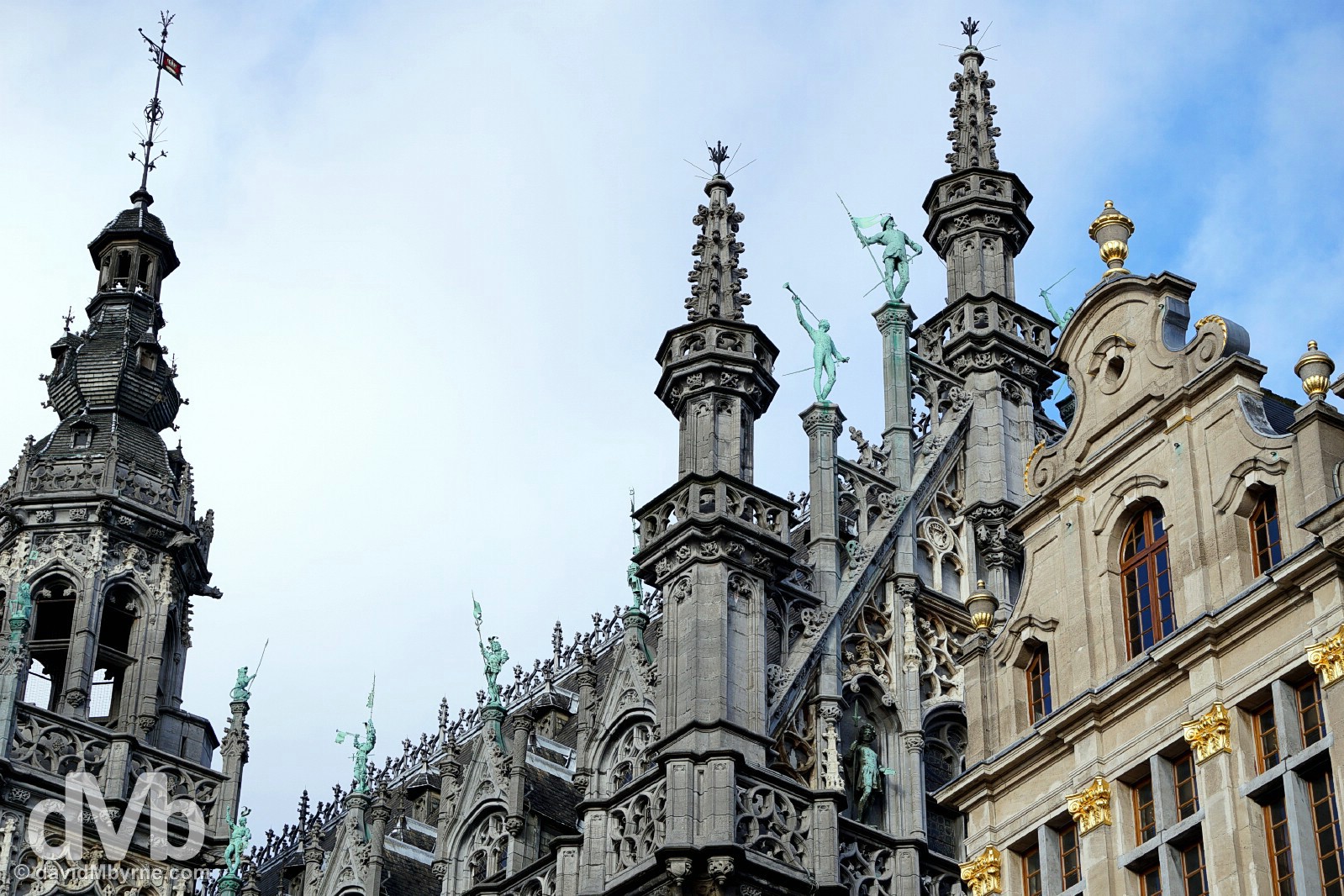 Yes, I had mussels in Brussels. 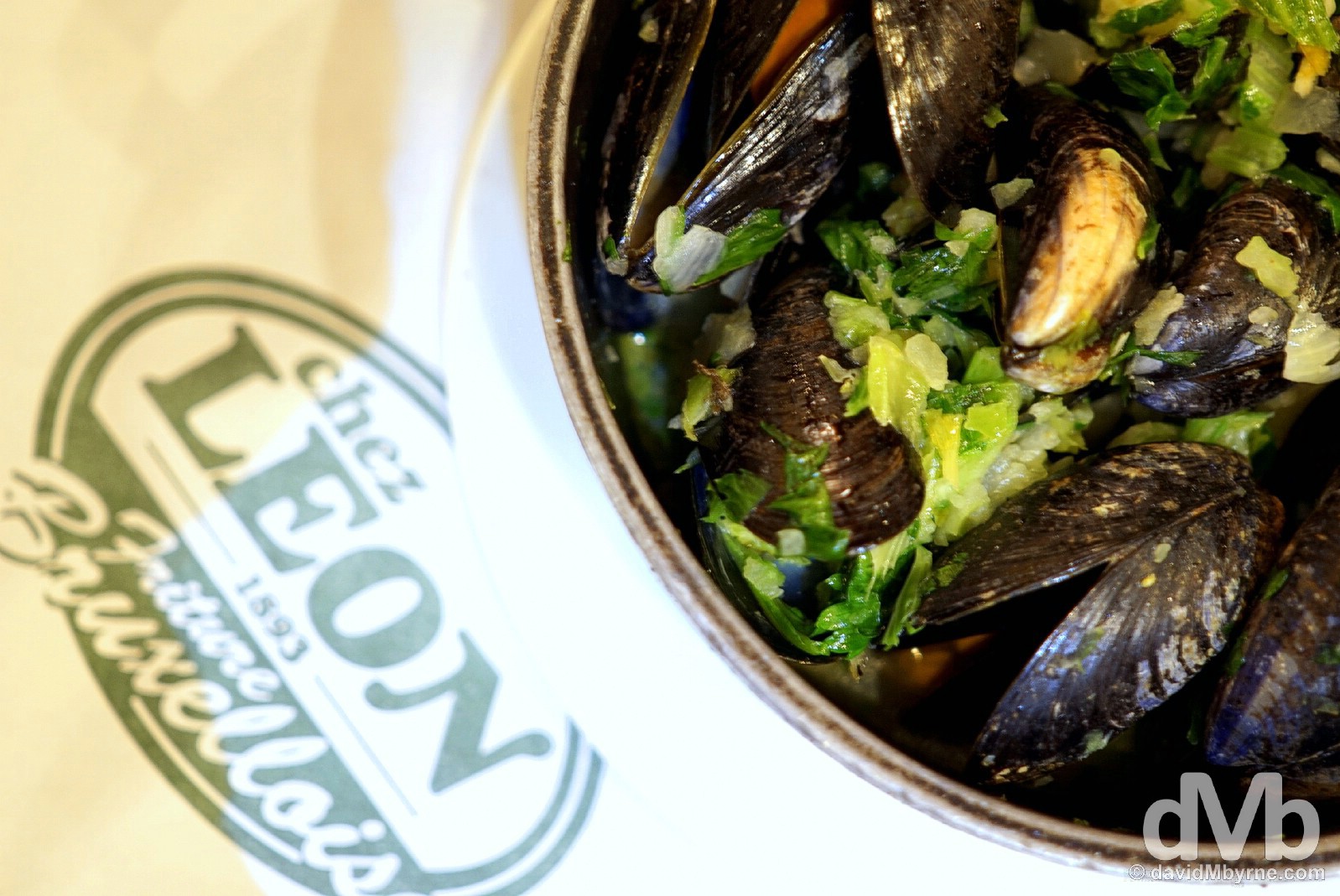 The Belgian national dish of mussels & fries in Chez Leon, Lower Town, Brussels, Belgium. January 13, 2016 || I’m not a foodie but seemingly Brussels is a mighty fine place to eat out. So I did just that on my first night in the city, sampling Belgium’s national dish of mussels & fries in the process (washed down, of course, with one of Belgium’s 2000-plus varieties of beer). Yes, I had mussels in Brussels & I did so in Chez Leon. In business since 1893 on Rue des Bouchers, Brussels’ most famous dining street just off Grand Place, it’s a favourite with tourists but somehow still manages to remain somewhat authentic at the same time. 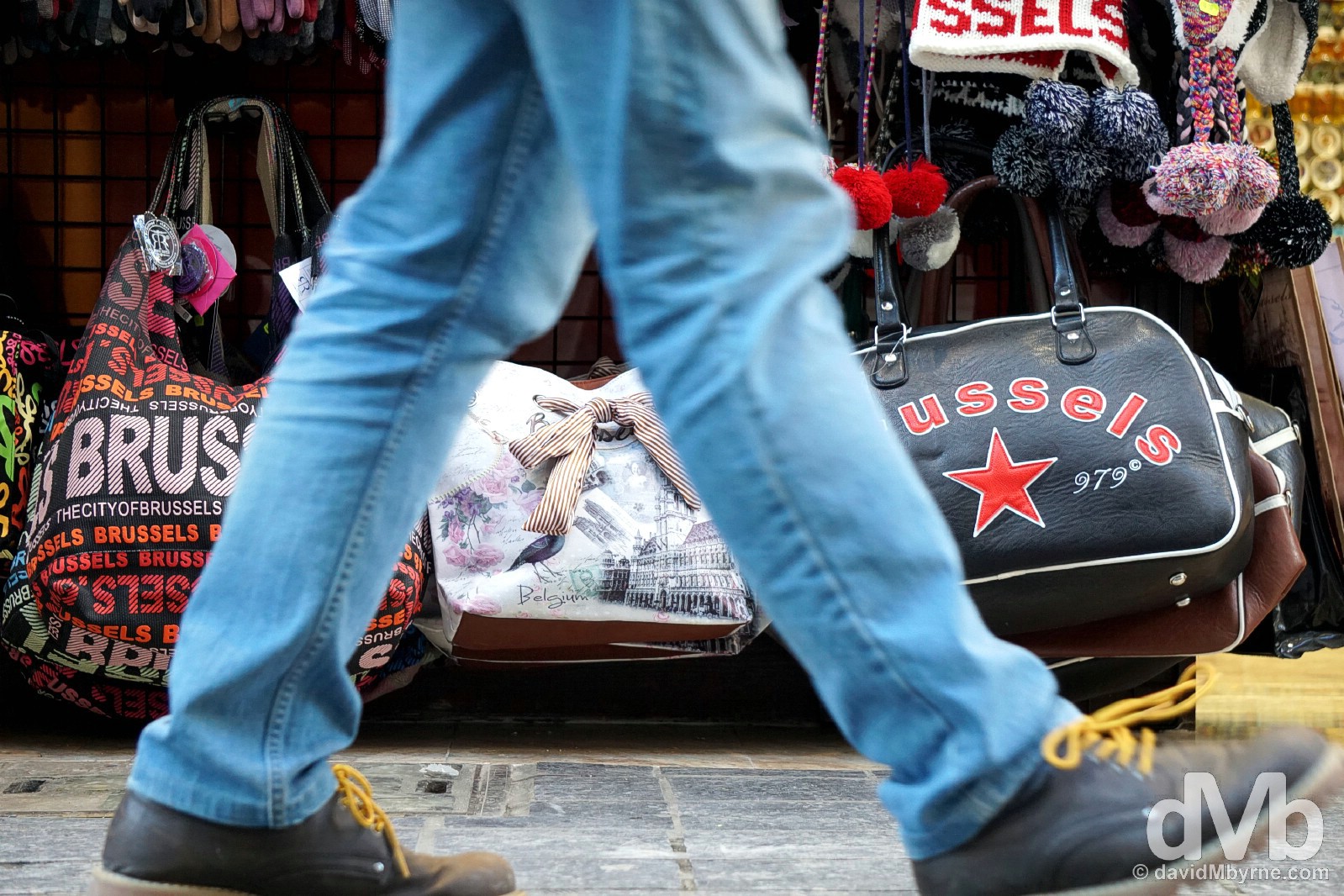 Brussels is the international headquarters of NATO. It’s also the political capital of Europe and the location for the EU Parliament, the directly elected parliamentary institution of the European Union (EU), that unique economic and political partnership comprised of 28 member states that was created after World War II to foster cooperation. As a result, and even though the EU has no official capital and no plans to declare one, some still call Brussels the capital of Europe. 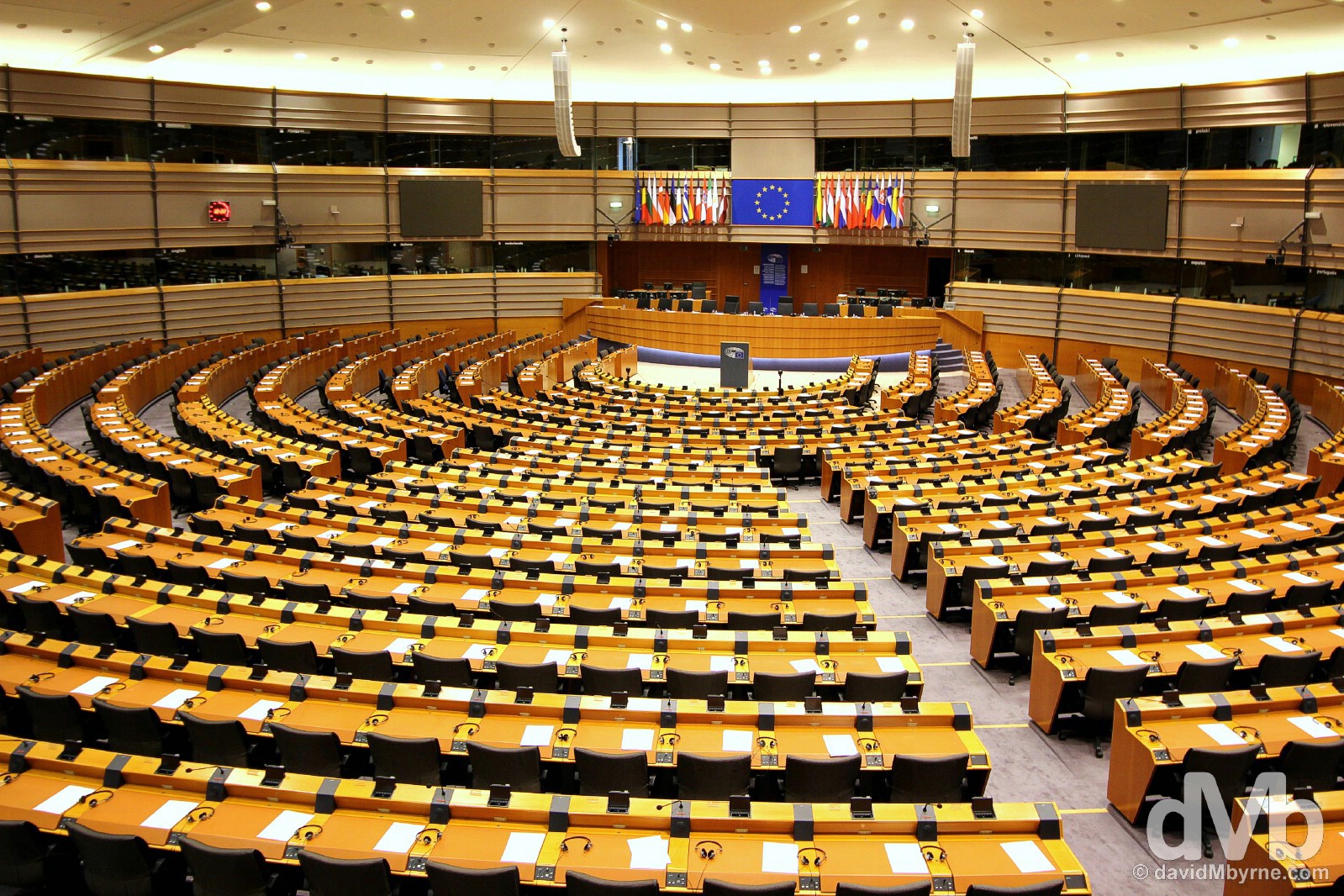 The Hemicycle of the EU Parliament in Brussels, Belgium. January 14, 2016 || The heart of the heart of democracy in Europe is here, the vast Hemicycle of the EU Parliament, the only EU institution that meets & debates in public. While the parliament’s official seat is in Strasbourg, France, most of the donkey work is conducted here in Brussels. In this vast chamber 751 MEPs (as of October 2015) do what they do, MEPs elected every 5 years to represent some 500 million Europeans, the second largest democratic electorate in the world after the Parliament of India and the largest trans-national democratic electorate in the world. It was interesting to view this place although the so-called ‘tour’ is nothing more than getting access to the visitors balcony of the Hemisphere from where this picture was captured – seemingly pictures are not allowed (No Photo signs abound) but I’m guessing that is only when parliament is in session because those sharing the balcony with me on this day were happily snapping away, an infectious endeavor that ultimately meant I did too.

I wanted to see what all the fuss was about and was a tad letdown. ‘Oh dear. Is that it, that’s a national symbol?’ I was forced to question. 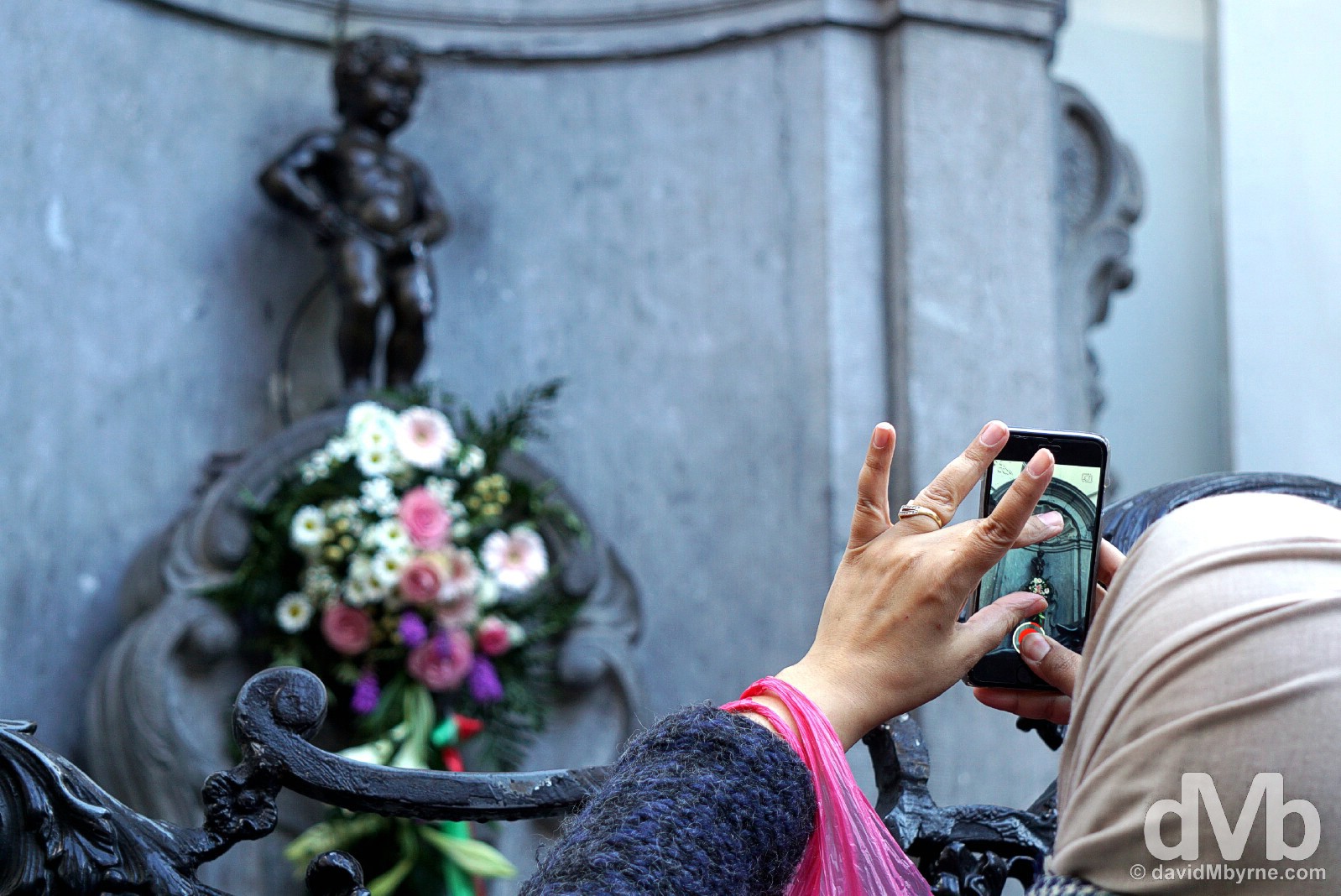 Capturing the tiny Manneken Pis statue, a national symbol of Belgium. Brussels, Belgium. January 14, 2016 || A symbol of the country, the small bronze Manneken Pis (meaning Little man Pee in Dutch) is a 61-centimeter-high statue of a boy relieving himself into a pool. Yes, that’s it. Said to represent the irreverent spirit of the city, the present-day statue, regularly dressed up in various outfits, dates to 1619 but a statue has stood here since as early as the mid-14th century. Lost in legend, the statue’s origins are muddy. Some say he’s modelled on a boy who extinguished fires (small ones no doubt) but the truth, I’m guessing, is probably a little more believable.

Brussels, the capital of a country that unleashed Tintin & the Smurfs on the world, is well-know for its giant comic murals. There’s even a mural walking tour around the city centre. 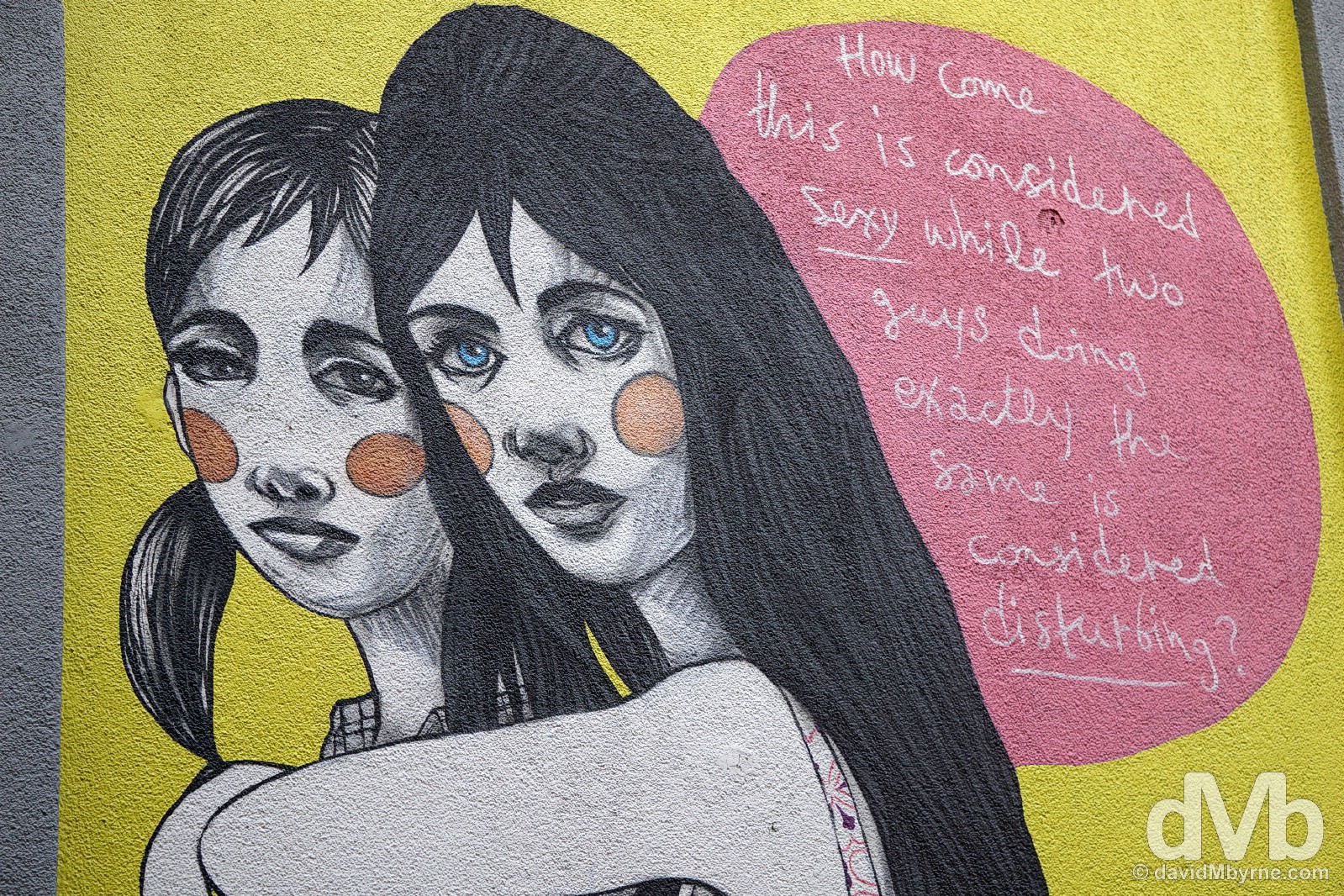 Our Lady of the Sablon Church

Needless to say you’ve a large choice of churches to visit in Brussels. I found the Gothic Our Lady of the Sablon Church rather photogenic. 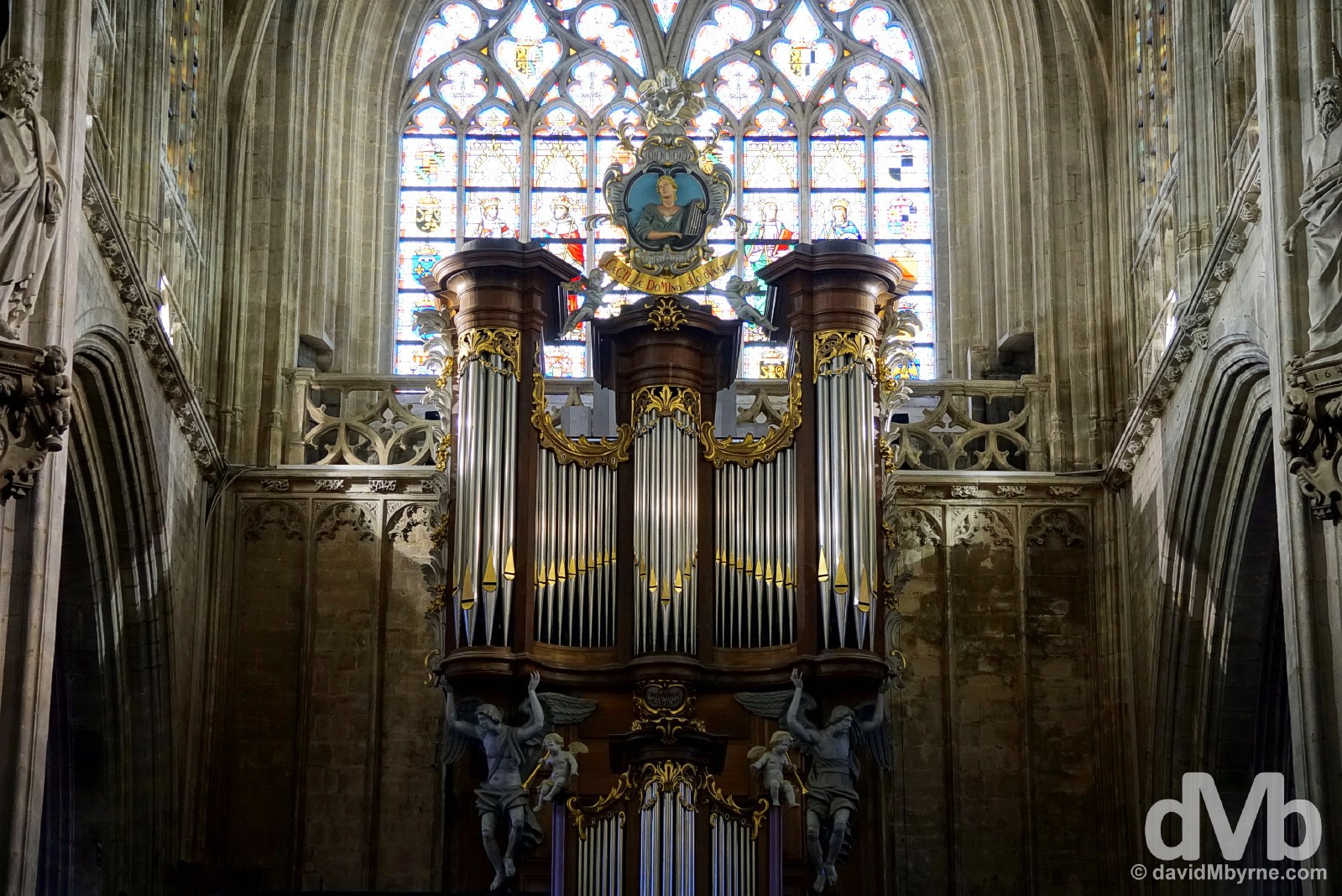 The impressive organ of the Our Land of the Sablon Church in Brussels, Belgium. January 14, 2016 || Taking just shy of 150 years to construct (1400-1549), the Our Land of the Sablon Church is considered one of the jewels of the city’s 15th century architecture. The largest and the most flamboyant Gothic edifice in Brussels, it houses many works of art, eight gorgeous stained-glass windows, two magnificent Baroque chapels, and a rather impressive organ, the highlight for me of the richly decorated interior.

Not to be missed when in Brussels is the Palais de Justice. Not that you’re likely to; it’s massive. 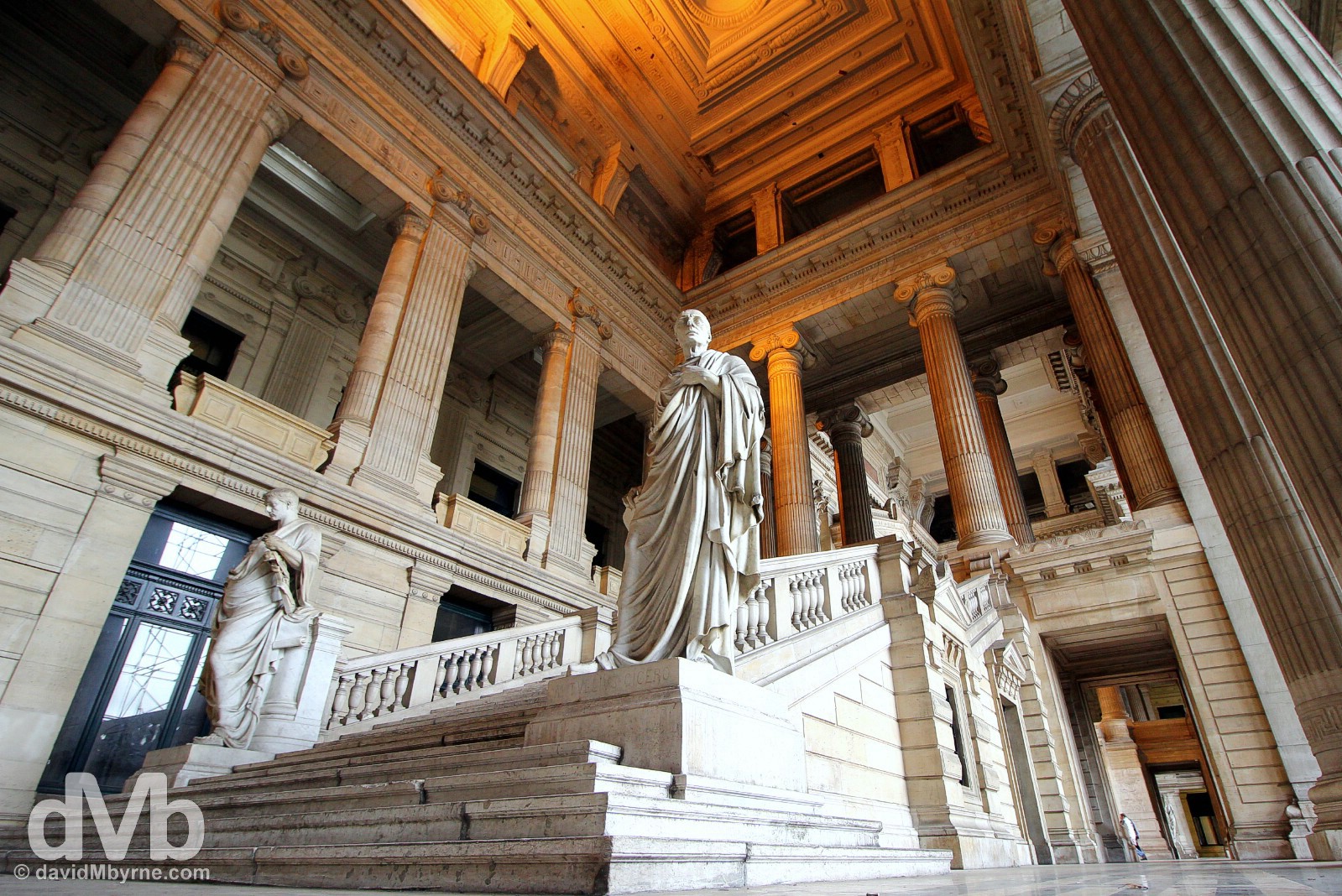 Inside the Palais de Justice, Brussels, Belgium. January 14, 2016 || A Brussels landmark, its 104-metre-high dome visible from afar, the Palais de Justice was built as a symbol of law and order between 1866 and 1883. The gargantuan structure was once the largest building in the world. It’s not hard to see why; even today its 26,000 m² of floor space makes it one of the biggest buildings on earth. Still the largest courthouse in the world, it’s larger even than Peter’s Basilica in Vatican City, it bulk seemingly enhanced by the fact it’s seated on a hill. It was designed to evoke the temples of the Egyptian Pharaohs, something you can appreciate when poking around in here (and after having visited Egypt of course). Currently undergoing elongated renovations (since 2003) and covered in a unsightly skin of scaffolding, this place was said to have cost a whopping 45 million Belgian Francs when built at a time when the city of Brussels obviously had a bit of cash to spend. What that amount converts into in today’s money I’ve no idea but suffice to say it was a sizable outlay.

Opened to great fanfare in 1847, the neoclassical Galeries St Hubert, the grande dame of Brussels’ many shopping galleries, was the world’s first shopping centre. Go Brussels! 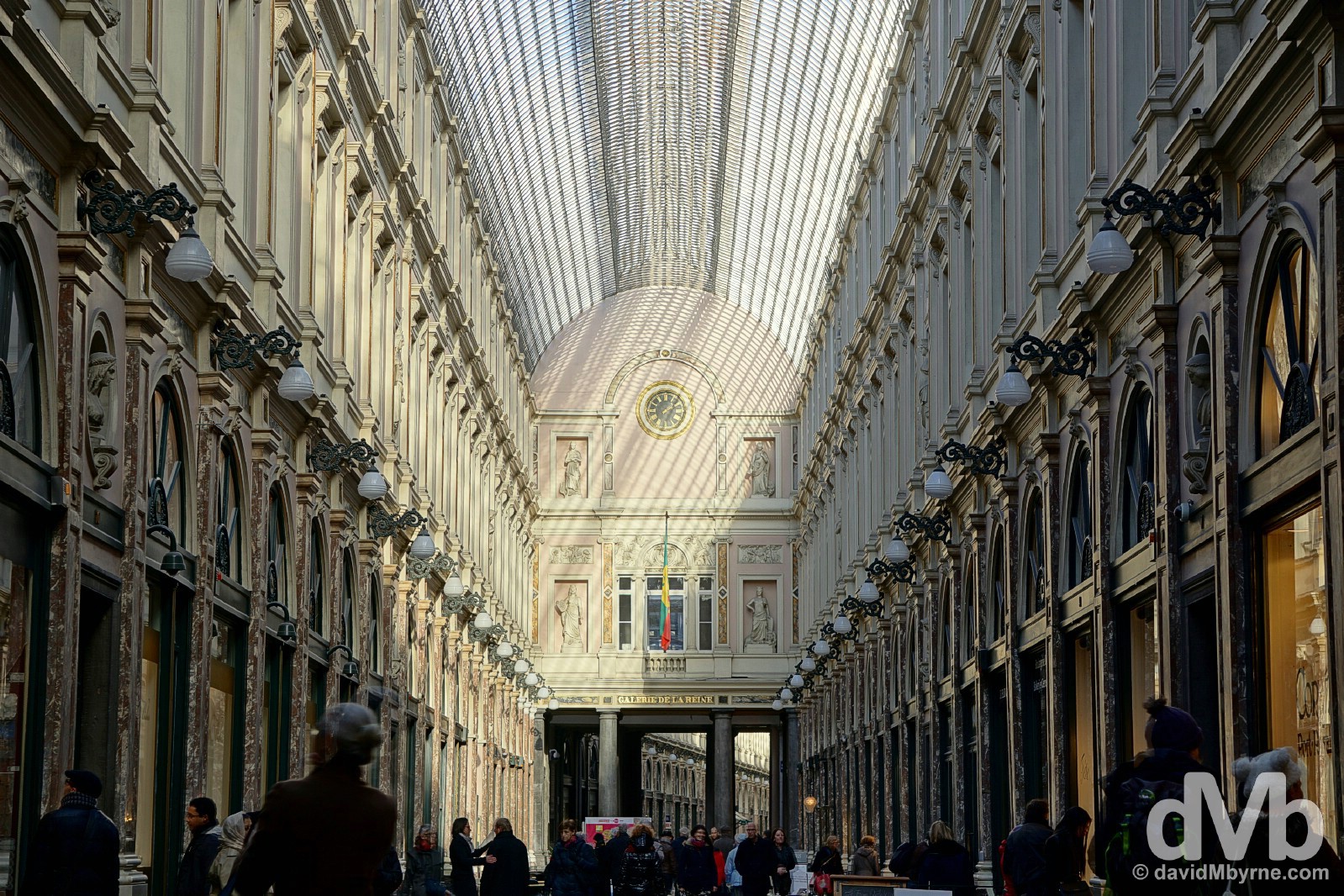 Arcaded Galeries St Hubert, the world’s first shopping centre. Brussels, Belgium. January 14, 2016 || Comprising three connected sections (this is Galerie de la Reine) & enclosed under a vaulted glass roof, the light & airy space of Galeries St Hubert has aged well and today is still one of the finest shopping environments in Europe. It is full of glistening window displays, bookshops, cafes, restaurants and tourist orientated chocolate shops, none of which are cheap – this place, and as it has always done, draws the fashionable elite. Needless to say it’s a nice place to amble.

See more from Belgium as posted from the road in a January 2016 posting Belgium – An Exploration of Belgium’s Big Four of Brussels, Ghent, Bruges & Antwerp.